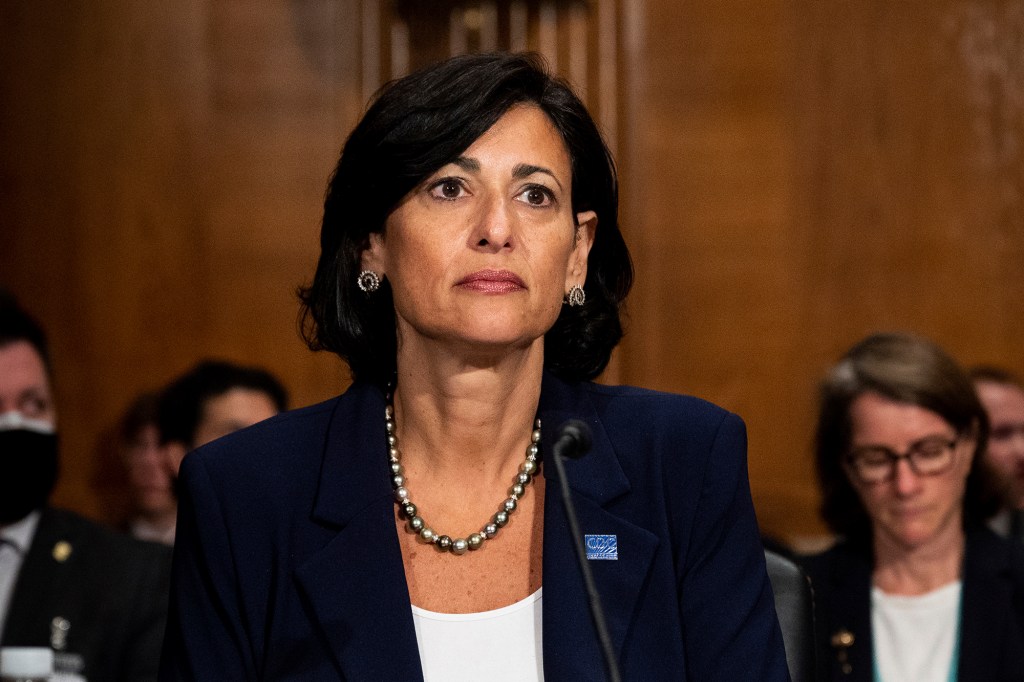 In a highly unusual move, the head of the Centers for Disease Control and Prevention overruled an advisory panel that rejected recommending booster shots of Pfizer’s COVID-19 vaccine for frontline or exposed workers, including healthcare workers and teachers.

CDC Director Dr. Rochelle Walensky approved a series of recommendations by the panel Thursday, including doling out the shots to older Americans aged 65 and over, as well as those aged 50 and older with underlying conditions.

But the panel voted against younger Americans who are frontline workers or have an occupation that may put them at increased risk of exposure getting a booster shot.

Walensky broke from the panel’s recommendation, noting that her decision aligned with the Food and Drug Administration’s authorization earlier this week.

That means people who live or work in institutional settings with increased risk of exposure to the deadly virus – like health care workers, teachers and day care staffers – can get booster shots.

The panel voted 9 to 6 to reject that proposal, but Walensky issued a statement several hours after it adjourned saying she had restored the recommendation.

“As CDC director, it is my job to recognize where our actions can have the greatest impact,” Walensky said. “At CDC, we are tasked with analyzing complex, often imperfect data to make concrete recommendations that optimize health. In a pandemic, even with uncertainty, we must take actions that we anticipate will do the greatest good.”

Walensky said US health officials can “best serve” the nation’s needs by giving booster doses to the elderly, those in long-term care facilities and others with underlying medical conditions, as well as at-risk adults from “occupational and institutional” exposure to the virus.

Still, the CDC director said earlier Thursday at the meeting that vaccinating Americans who haven’t gotten a shot remains the goal “here in America and around the world” while acknowledging that the data on who needs a booster shot as soon as possible was imperfect.

“Yet collectively they form a picture for us,” Walensky said. “And they are what we have in this moment to make a decision about the next stage in this pandemic.”

The CDC panel indicated its recommendations would change if new evidence showing that more people need a booster shot emerges.

The White House, meanwhile, could begin promoting and rolling out a plan as soon as Friday, the New York Times reported.

“I am surprised that Dr. Walensky overturned one of the four A.C.I.P. votes today, and I believe others will be as well,” Dr. Yvonne Maldonado, an infectious disease expert at Stanford and the American Academy of Pediatrics liaison to the Advisory Committee on Immunization Practices, told the newspaper.

Still, the vote on boosters for those with occupational risks was close, Maldonado said while agreeing with Walensky’s decision.

“This addresses not only waning immunity but those at high risk of exposure,” Dr. Maldonado told the Times.

Experts outside the CDC, meanwhile, told the Times Walensky may have had little choice but to align herself with the FDA’s earlier decision.

“There’s a complexity here because Dr. Walensky was part of the White House announcement” on boosters to give a large segment of Americans access to the shots, Dr. Ashish Jha, dean of the Brown University School of Public Health, told the Times.

nypost.com - 3 months ago
After calling out some Republicans during the week for their opposition to the mask rules in Congress, Nancy Pelosi administered the oath to Texas Republican Rep. Jake Ellzey — and took a photo without a mask.
Read More

nypost.com - 9 months ago
A woman in the UK called the cops after she arrived at a McDonald’s drive-thru window — and found the restaurant had stopped serving breakfast, according to local authorities. The breakfast-loving Brit was so incensed about having to order off the lunch
Read More

Five dead in protests in Myanmar amid effort to restore democracy

nypost.com - 7 months ago
At least five protesters were killed by security forces in Myanmar, witnesses and media reported, as activists marked the death anniversary on Saturday of a student whose killing in 1988 sparked an uprising against the military government. Two people were
Read More
More News & Articles