Rep. Alexandria Ocasio-Cortez is being criticized after she appeared to break down just moments after she voted "present" on a vote to provide $1 billion in funding for Israel’s Iron Dome.
Author: Emily Crane
Published: 2021-09-24 10:30 am 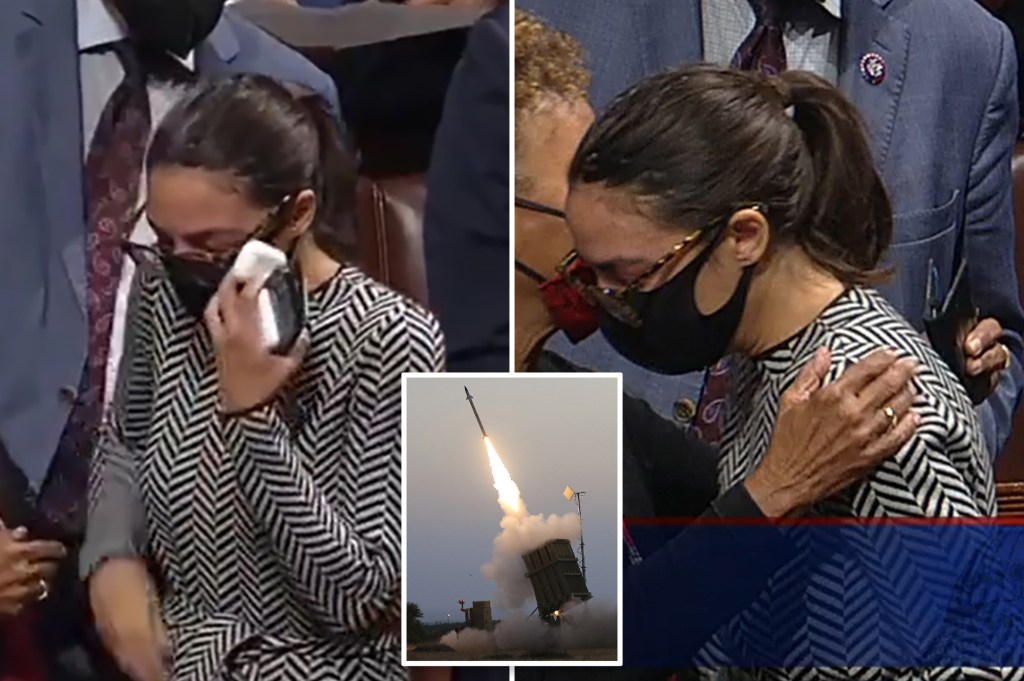 Rep. Alexandria Ocasio-Cortez is being dragged for “bad theater” after she appeared to break down on the House floor just moments after she voted “present” on an effort to provide $1 billion in funding for Israel’s Iron Dome.

The 31-year-old made a last-minute decision to amend her vote to “present” on Thursday — going against her fellow Squad members who had opposed the bill.

Moments after the bill overwhelmingly passed 420-9, the New York Democrat appeared to start crying and was comforted by fellow lawmakers.

Critics were quick to accuse Ocasio-Cortez of “theatrics.”

“Theatre and bad theatre at that,” Meghan McCain tweeted.

“Why is @AOC crying? Because Jewish and Christian women and children won’t shake in terror as unguided rockets rain down on their homes and schools,” said Josh Mandel, an Ohio GOP Senate candidate.

“Why is AOC crying because fewer rockets will fall on Israeli citizens and cities? The Iron Dome doesn’t have offensive capabilities. It’s a defensive weapon used to stop rockets launched by terrorists from killing innocent people. Why does that make her sad? Will anyone ask?” Daily Caller editor David Hookstead questioned.

“The ONLY reason AOC changed her vote from ‘NO’ to ‘PRESENT’ on today’s #IronDome bill is because she wants to take on @SenSchumer next year. Those tears aren’t fooling us,” StopAntisemitism.org tweeted.

The passing of the bill came just days after some far-left lawmakers threatened to tank the short-term funding bill.

nypost.com - 7 months ago
The first high-level diplomacy talks between the Biden administration and Chinese government kicked off with an abrasive exchange, as the world powers seek to ease tense relations, according to the Wall Street Journal. US Secretary of State Antony Blinken
Read More

nypost.com - 3 weeks ago
the vibe for Sunday’s preseason visit to Staples Center is going to be more skeleton crew than star-studded.
Read More

nypost.com - 7 months ago
The smart money is against embattled Gov. Andrew Cuomo being reelected next year, according to one online gambling operation. But the scandal-scarred Democrat isn’t likely to call it quits and resign by the end of next month, based on odds being offered b
Read More

nypost.com - 1 month ago
Congress got its first chance to question Team Biden about the Afghanistan catastrophe Monday, when Secretary of State Antony Blinken testified before the House Foreign Affairs Committee. All it got was “Blame Trump.” Taking cues from his boss, Blinken
Read More
More News & Articles