After Rikers, Will It Be Enough to Build Better Jails?

As New York looks to replace Rikers Island, some say a focus on more humane jail design is largely beside the point.
Author: Liza Weisstuch
Published: 2021-09-24 08:30 am 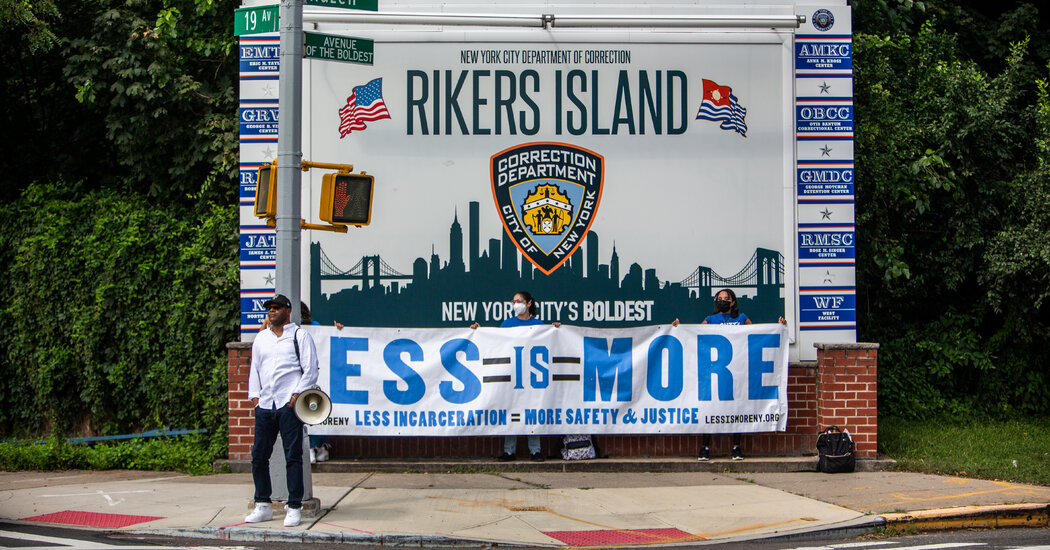 Darren Mack remembers August 1992. It was so hot that the metal walls of his jail cell on Rikers Island were “sweating.” Safety guards on windows blocked ventilation. An industrial fan on each tier of cellblocks was meant to cool the place, but they hardly worked, recalled Mr. Mack, who served 19 months on Rikers Island on a charge of accomplice to armed robbery.

Mr. Mack’s experience at Rikers, the nearly 415-acre complex in the East River between the Bronx and Queens, stayed with him. A few years after his release in 2014, he was part of the campaign that persuaded Mayor Bill de Blasio to close Rikers for good. And last year, equipped with a bachelor’s degree through the Bard Prison Initiative, he co-founded Freedom Agenda, a nonprofit that advocates for individuals and communities impacted by incarceration in New York City.

One way prisons can be particularly dangerous — one that directly affected Mr. Mack on that sweltering day in the early 1990s — is poor design, including a lack of natural light and ventilation, the last of which is crucial during a pandemic. Design and infrastructural issues are especially significant now given the city’s plan to shutter Rikers by 2027, and to build a jail in each borough except Staten Island, a project the City Council approved in 2019.

But the question of how to remake the city’s jails has sharply divided city officials, who are intent on maintaining lockups, advocates for prison rights and even architects. As the city pushes for new designs that might make its jails feel more humane, many activists and some city officials are pushing for the city to invest more in social services in underserved communities, which could keep people out of prison to begin with.

Some architects are beginning to question their roles in designing prisons.

Last September, the board of directors of the New York City chapter of the American Institute of Architects, a professional organization, issued a statement that acknowledged architects’ complicity in “upholding intrinsic racism within the criminal justice system” and called upon members to stop designing unjust or cruel spaces, like in prisons, jails and police departments. It urged members to consider restorative justice in their design processes. And last December, after years of pressure, the institute’s national board adopted new rules to its Code of Ethics prohibiting members from designing spaces intended for execution, torture and solitary confinement.

“This is part of a broader discussion we’ve been having for many years, but the events of last summer really brought it to a fore,” said Kenneth Lewis, president of the institute’s New York City chapter, referring to the widespread Black Lives Matter protests of 2020. “This is about having that conversation and enlightening ourselves.”

Smaller, Safer, Fairer, the city’s road map to closing Rikers, commits to “ensuring that the city’s jails are humane productive places for those who work and are incarcerated there now,” as well as to designing modern facilities that are well integrated into the dense urban landscape and reducing the population of incarcerated people overall.

Architects and contractors are teaming up to bid for the project, which will conclude the submission process in November. Nadine Maleh, the executive director of capital projects for the Mayor’s Office of Criminal Justice, said she wants to integrate social services and criminal justice reform into the redesign effort. “We very much need innovative architects, and to use the thinking embodied in the A.I.A. statement to create facilities that will positively affect our communities and neighborhoods,” she wrote in an email to The New York Times. “We need the activist architecture community to be involved — to not opt out.”

In 2019, Ms. Maleh was part of a delegation that visited Norway, a nation known for its humane prisons, to learn more about them. Others in the group included the city’s commissioner of corrections, other officials from the mayor’s office, former inmates and their advocates.

“There was a real focus on facilities in lots of different aspects, trying to replicate as much as possible of what life outside the facility was like through design elements,” said Dana Kaplan, the deputy director of justice initiatives for the mayor’s office, who participated in the Norway trip. “And I think a lot of that, alongside things like access to programming and good outdoor space and light, are things that we’re looking for.”

The design guidelines for the new jails were created by the city’s Department of Design and Construction with input from the mayor’s office, the Department of City Planning and other planners and architects. Workshops included neighborhood action committees and justice advocates. People who had been incarcerated were involved in the process.

But many activists are unsatisfied with this approach.

“It is impossible to design one’s way out of the problems of the criminal justice system and the violence perpetuated by it,” said Isabelle Kirkham-Lewitt, director of Columbia Books on Architecture and the City and editor of “Paths to Prison: On the Architectures of Carcerality.” The prison system, she said, is inherently unjust. “The idea that better or more humane sites of confinement will make for better, more humane carceral systems or justice system is, I think, a really damaging myth.”

A leading figure in the push for alternative spaces is Deanna Van Buren, an architect and co-founder of Designing Justice/Designing Spaces, a nonprofit design firm based in Oakland, Calif. Her TED Talk, “What a World Without Prisons Could Look Like,” has been viewed over 1.1 million times. Her biggest project to date, Restore Oakland, is a community advocacy and training complex that focuses in part on restorative justice, an approach that centers on rehabilitation through reconciliation between offenders and victims. Within the complex there is a restorative justice room, which has airy spaces for gathering and separate entrances for sensitive cases. Much of the design is the result of collaborative efforts with community members impacted by incarceration.

“We’re not really interested in building new jails,” said Bianca Tylek, founder and executive director of Worth Rises, a nonprofit based in New York. The focus, she said, must shift to building up communities and cutting off the pipeline to prisons. “The most important thing is that the infrastructure of a community reflects its needs as determined by community members,” she said, referring to basic needs like education, food and health care. “Architects and designers must listen and bring structures to life that embody the needs of those who will use them.”

Many advocates for rethinking prisons lean heavily on this last point. According to the National Council of Architectural Registration Boards, just 2 percent of registered architects in the country identified as Black in 2020.

Ibrahim Greenidge, the founder and managing partner of BOLT Architecture in Brooklyn, is working on a book about his life as a Black architect. Earlier in his career, he worked on civic buildings, like schools and courthouses, and he visited prisons with design teams.

“Habitable spaces are required to have light and ventilation,” he said. “Is this rehabilitation? Are we really designing spaces without windows, when the building code requires you to have windows in any space people live in?”

For some, the statement issued by the New York chapter of the American Institute of Architects could be the beginning of a broader movement.

“I am insulted by the lack of exploration of how the built environment can heal, because we already know that the built environment can harm,” said Pascale Sablan, president-elect of the National Organization of Minority Architects and the executive director of Beyond the Built Environment, an advocacy organization. “You cannot make an unjust space more just by creating more natural light,” she continued.

Her goal, she said, is for the statement to inspire other chapters and organizations to commit to something similar. “And I promise you, if we as a collective put that pressure on our civic leaders, they’ll have to hear us, they’ll have to respond.”

www.nytimes.com - 1 year ago
He believed pot was dangerous until his research convinced him otherwise. He then became a leading proponent of legalization.
Read More

www.nytimes.com - 6 months ago
Timothy Granison’s arrest was the latest crisis for the re-election campaign of Mayor Lovely Warren of Rochester, N.Y., who suggested the investigation was part of a conspiracy against her.
Read More

Ruth Sullivan, Advocate for People With Autism, Dies at 97

www.nytimes.com - 2 months ago
After her son was found to be autistic, she started organizations to help children and adults. She also consulted on the making of the movie “Rain Man.”
Read More

In Love and Out of Debt

www.nytimes.com - 1 year ago
Haley Messner and Tanner Cemper had obstacles to overcome before they could marry. First came their financial issues, then they had to deal with a pandemic.
Read More
More News & Articles