Analysis: This senator accidentally told the truth about why he wanted Donald Trump's endorsement

If you listen closely enough, politicians will usually tell you the truth -- even if they don't do it on purpose. Witness Sen. Chuck Grassley, accepting the endorsement of former President Donald Trump at a rally over the weekend in Iowa.
Author:
Published: 2021-10-15 06:30 pm 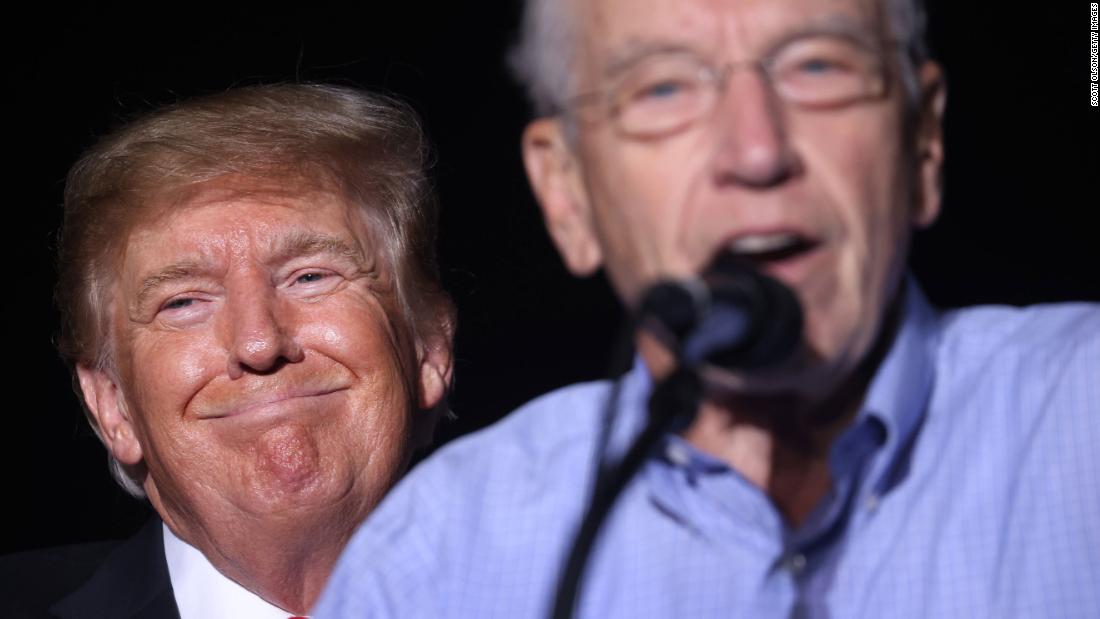 (CNN)If you listen closely enough, politicians will usually tell you the truth -- even if they don't do it on purpose. Witness Sen. Chuck Grassley, accepting the endorsement of former President Donald Trump at a rally over the weekend in Iowa.

"I was born at night, but not last night," Grassley told the crowd with Trump standing next to him onstage. "So if I didn't accept the endorsement of a person who has 91% of the Republican voters in Iowa, I wouldn't be too smart. I'm smart enough to accept that endorsement."

The crowd laughed and applauded.

But notice what Grassley actually said: He wants Trump's endorsement not necessarily because he admires him or agrees with him on policy or thinks the former President has a vision to lead America forward. Instead, he wants Trump's endorsement because Trump is popular with the GOP base. That's it. It's that simple. Pure political calculus for a politician running for another term in November 2022.

Here's the thing: Grassley doesn't see eye to eye with Trump. In fact, as recently as (checks calendar) earlier this year, Grassley was blasting Trump for his "poor leadership in his words and actions" during the January 6 riot at the US Capitol.

When Trump fired two inspectors general in the administration in 2020, Grassley said that the then-President had "failed" to cite proper justification for the move.

And in 2019, Grassley said Trump's contention that wind turbines cause cancer was "idiotic."

There's more but you get the idea: Grassley was plenty critical of Trump and did his best to make sure there was some distance between himself and the former President on a number of occasions.

All of which makes Grassley's willing acceptance of the Trump endorsement all the more, well, icky. But at least we know why he did it. Grassley told us. It was for politics -- nothing more or less.

The Point: Trump's cult of personality within the GOP grows by the day. And even skeptics like Grassley have now jumped in with both feet.

www.cnn.com - 11 months ago
• Nearly a dozen GOP senators announce plan to vote against counting electoral votes • Analysis: Republicans are to be in a terrible political position
Read More

www.cnn.com - 8 months ago
New cases of Covid-19 in the United States have fallen in the last two months to about 55,000 a day. That seems like a whopping number until you compare it with the more than 200,000 daily cases reported in early January. Deaths have also fallen, to about
Read More

www.cnn.com - 1 year ago
Wisconsin is opening a field hospital at the state fair park in response to an alarming surge in Covid-19 hospitalizations that is overwhelming hospitals, Gov. Tony Evers announced.
Read More

www.cnn.com - 4 months ago
California gubernatorial candidate Caitlyn Jenner defended her travel out of state on Friday -- insisting that she is not pausing or suspending her campaign -- after an Australian publication reported that she is in Australia filming "Celebrity Big
Read More
More News & Articles