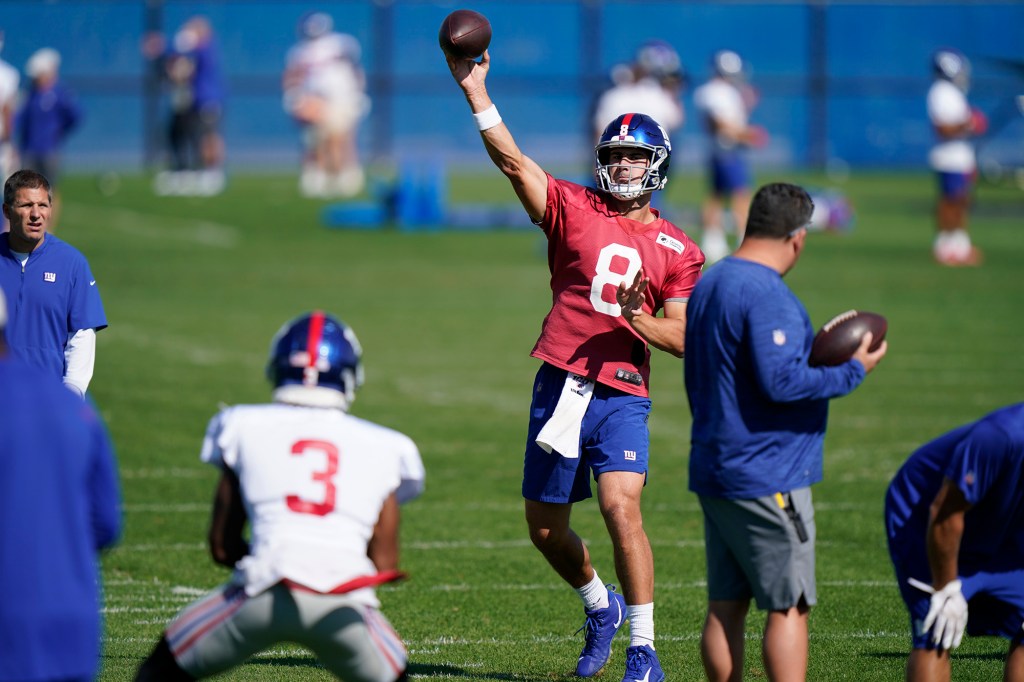 Be honest: You didn’t think this was possible.

When you saw Daniel Jones stagger to his feet like a punch-drunk boxer and then wobble so badly that Cowboys defensive back Jayron Kearse rushed to his aid to prevent him from falling down last Sunday, any thoughts that Jones would be playing a week later were pure folly.

But by the grace of a good medical staff, Jones’ toughness or simply dumb luck, the Giants quarterback will play against the Rams (4-1) on Sunday at MetLife Stadium — barring an unforeseen setback.

Jones practiced in full on Friday and, according to head coach Joe Judge, had to pass one final neurological test with an independent doctor later in the day to be medically cleared to play.

One source inside the organization told The Post that despite how scary it looked when Jones was staggered after the hit, he could have returned to the game in the second half and the injury wasn’t as serious as it appeared. The source said Jones “was fine’’ on the team’s flight home from Dallas, even reading a book.

Head injuries are complicated, though, and added precautions must be taken with the long-term results, as much as the game at hand, in mind.

Jones back in uniform so soon is enormously good news for the Giants — both in the short-term, as they stare at a game against the heavily favored Rams and their game-wrecking defensive tackle, Aaron Donald, and in the long-term, as they continue to evaluate whether Jones is the franchise quarterback to lead them for the next decade.

When Jones made that ill-advised decision to lead with his head against Dallas defender Jabril Cox last Sunday, colliding just short of the goal line and knocking himself out of the game, he could have put himself on the shelf for weeks.

That not only would have further doomed a Giants season that’s already teetering on the brink of collapse at 1-4, but also would have severely clouded the evaluation process of Jones and his future with the franchise. Jones is in his critical make-or-break third season with the club’s fifth-year-option decision looming.

Any prolonged series of missed games would make that process more difficult than it already is.

Team record aside, Jones has been having a solid season. His completion percentage is up (64.3) and his turnovers are down (his only interception came on an end-of-the-half Hail Mary in New Orleans). Jones is the Giants’ offense.

“Obviously, Daniel is a critical part of this team,’’ Judge said. “He’s playing at a high level for us right now. This guy does a lot of things in terms of making plays, extending plays. He’s made plays with his legs, with his arm. I can continue to see this guy progressing within his craft.’’

An area in which Jones needs to make more progress is how he walks the fine line between hurting opposing defenses with his athleticism and not hurting himself by taking hits like the one he absorbed last week.

Judge doesn’t want to stifle Jones’ ability to make back-breaking plays with his legs. But he, too, doesn’t want to see his team’s season wrecked because of a reckless running decision by Jones, either.

“Daniel’s a very competitive player,’’ Judge said. “He’s always looking to go ahead and get that extra yard. I think there’s an element with Daniel where he doesn’t want the guys to see him slide and step out of bounds, because he wants them to know that he’s in it with them.

Hopefully, Jones learned from his bad business decision against Dallas last Sunday, because he put a scare into everyone involved. Rookie receiver Kadarius Toney, in fact, was so rattled by what he saw he rushed over to offer words of encouragement to Jones before he was carted off the AT&T Stadium field.

If Jones is hurt, the entire Giants organization is hurt.

He needs to keep himself upright and healthy as much as his teammates around him do.

nypost.com - 9 months ago
Millennium Management’s Israel Englander earned $3.8 billion last year, landing him the biggest payday of any hedge fund manager in 2020, according to Institutional Investor. Englander more than doubled his $1.5 billion payday in 2019 and made $2 billion
Read More

Tiny sea turtle rescued with 158 pieces of plastic in gut

nypost.com - 3 months ago
A helpless young green sea turtle is recovering thanks to rescuers in Phuket, Thailand after having its tiny stomach pumped of 60 grams of plastic.
Read More

nypost.com - 1 month ago
Through their first six games of the season, while alternating losses and wins, the Nets have been most consistent at getting off to slow starts.
Read More

Shohei Ohtani will only bat, not pitch, in second Yankees series

nypost.com - 3 months ago
Shohei Ohtani was scratched from his pitching start because of lingering soreness in his right wrist after getting hit by a pitch on Saturday.
Read More
More News & Articles