Albany police, NYPD order cops to do nothing as drug addicts shoot up

New York City’s war on drugs is over. The junkies won. The New York Police Department waved the white flag last week — upon orders to surrender from Albany — directing officers to let drug addicts freely shoot up on city streets, and even let them share
Author: Kerry J. Byrne, Dean Balsamini
Published: 2021-10-16 09:37 am 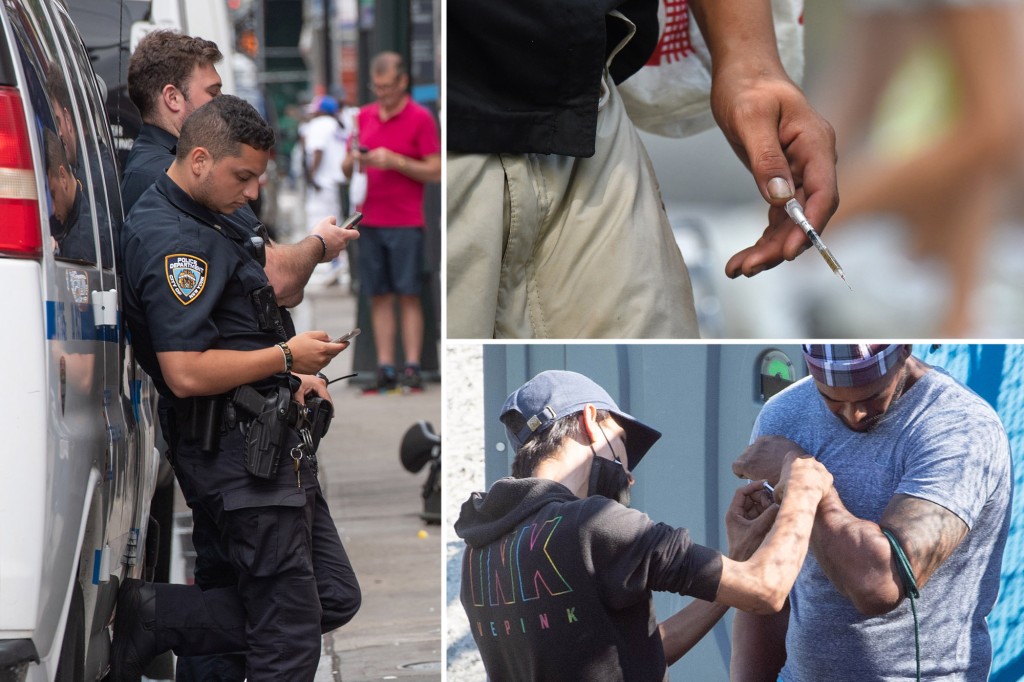 New York City’s war on drugs is over. The junkies won.

The New York Police Department waved the white flag last week — upon orders to surrender from Albany — directing officers to let drug addicts freely shoot up on city streets, and even let them share needles.

“Effective immediately, members of the service should not take any enforcement action against any individual who possesses a hypodermic needle, even when it contains residue of a controlled substance,” states a directive to NYPD commanders issued last Friday and obtained by The Post.

Senate Bill 2523, cited in the order to street cops, decriminalizes the possession or sale of hypodermic needles and syringes, commonly used by addicts to inject drugs such as heroin.

“This law says stick a needle in your arm, pump your body with poison and lose your life,” said state Sen. Andrew Lanza (R-Staten Island), one of the few NYC lawmakers who opposed the legislation. “This law says to people suffering addiction that New York has given up on you, that New York doesn’t care about you.”

“This is outrageous,” railed real estate executive William Abramson, who represents residential and commercial clients around the city, many of whom have complained to him about addicts found whacked out in their stoops and doorways.

“Once again, quality of life in New York City continues to deteriorate because of laws that do not consider the residents and businesses of the city. We all agree that something needs to be done to help addicts. But letting them shoot up on the streets does not help anyone. This is bad for everyone.”

Drug deaths across the city are skyrocketing. The Centers for Disease Control reports 2,243 people died from drug overdoses in New York City for the 12-month period that ended March 31 — a staggering 36 percent increase in OD deaths from the year before.

The NYPD decree also tells cops that “it is no longer a violation of law for an individual to possess a hypodermic needle, even when it did not come from a pharmacy or a needle exchange program.”

In other words: junkies are free to score needles on the black market, or to share them with other addicts, a risky behavior which creates added dangers for both the user and the wider community.

The potential for needle sharing “contravenes any logical and reasonable science based upon public health standards,” said Lanza.

This bill “was passed under the guise of compassion, but it’s one of the least compassionate bills I’ve seen come across the legislature in a long time,” he added. “There is nothing compassionate about telling people to keep doing something that is going to kill them.”

The city runs 14 storefront and 33 mobile needle exchanges that distributed 4.5 million syringes in 2018, the last year for which data is available, according to the Department of Health, adding that these exchanges have helped stop the spread of HIV.

“This law is a monument to how far we’ve deteriorated as a society in our relationship to the misuse of drugs,” said Luke Nasta, the CEO of Camelot Counseling, a longtime substance abuse treatment center on Staten Island. “The more permissive we get as a society the harder it is for people struggling to rehabilitate.”

The new legislation comes at a time when New York City streets, parks and public spaces are overrun by junkies.

The Post in recent months has chronicled addicts with needles, syringes, crack pipes and other paraphernalia, injecting or smoking drugs in broad daylight across the city, often with cops nearby. High-profile locations such as Washington Square Park and the streets of Midtown Manhattan, normally packed with tourists, have been inundated with addicts fearless of law enforcement.

Barbara Blair, President of the Garment District Alliance, which is battling a wave of heroin use in front of member businesses, is outraged.

“The new law is preposterous,” she said. “Mentally and emotionally ill individuals should be removed from the streets, involuntarily if necessary. They should be placed in high-quality settings, institutional settings if necessary, where they get the shelter, food and care they need. Having drug addicts, a frightful condition, freely injecting drugs and passing out in public is not tenable.”

New York lawmakers apparently see no problem, voting to let addicts freely use heroin and other injected drugs in public without threat of arrest.

“I hear the valid concerns that certain New Yorkers have regarding the increased presence of substance use on our streets and its impact on our communities,” said Rivera, the bill sponsor. “That is why it is critical that we move swiftly to open overdose prevention centers, a proven tool in preventing overdose deaths, stopping the spread of disease, providing a safe non-public space for those using drugs and a pathway to recovery.”

“This is not even a standard Democratic view. This is a progressive Democratic view and that’s what she’s signing on to here,” he said. “It all seems to be very oriented toward keeping the socialist progressive movement happy and she is working to protect herself against (likely NYC-based primary opponents) Tish James or Jumaane Williams.”

Before the new law, a cop might have arrested an addict after watching him or her shoot up in public, with only the residue of the drug left in the syringe. But under the new law, that residue is no longer a cause for arrest.

Possessing hypodermic needles has been an arrestable but non-bailable offense, based upon the state’s latest bail-reform laws. Addicts arrested for shooting up or even selling small amounts of heroin were typically back out walking the streets the same day.

Those bail-reform laws, coupled with threat of injury or infection to cops posed by needle-wielding junkies, and the lack of qualified immunity that makes officers personally liable if an arrest goes bad, invited cops to look the other way when faced with addicts on the street.

The new law, and the directive to officers, codifies this informal hands-off policy.

The results will be predictably bad for all New Yorkers, including the addicts, said Joseph Giacalone, a professor at John Jay College of Criminal Justice.

“Six months from now, New York politicians will be scratching their heads wondering why syringes are everywhere, drug use is up, overdoses are up, and why open-air drug markets are flourishing,” he said.

“It makes you shake your head.”

Jon Levine and Conor Skelding contributed to this report.

nypost.com - 2 months ago
Biden called off a scheduled trip to Chicago as Democratic divisions over the fate of two massive bills threatened to torpedo the president's domestic agenda.
Read More

EMS union to de Blasio: We need a pay raise more than a Canyon of Heroes parade

nypost.com - 6 months ago
Mayor Bill de Blasio has called for a parade to honor emergency workers in July. But the head of the FDNY EMS union wants more equitable pay for the essential workers.
Read More

nypost.com - 1 month ago
The 75-year-old has been largely confined to an iron lung contraption since he contracted the deadly disease almost seven decades ago.
Read More

Struggling Obi Toppin still can be key contributor for Knicks