Big turkeys are back for an IRL Thanksgiving

Thanksgiving 2021 may feel a lot more like a normal holiday than last year's — many Americans have been vaccinated, and restrictions have eased across the country.
Author:
Published: 2021-10-16 10:10 am 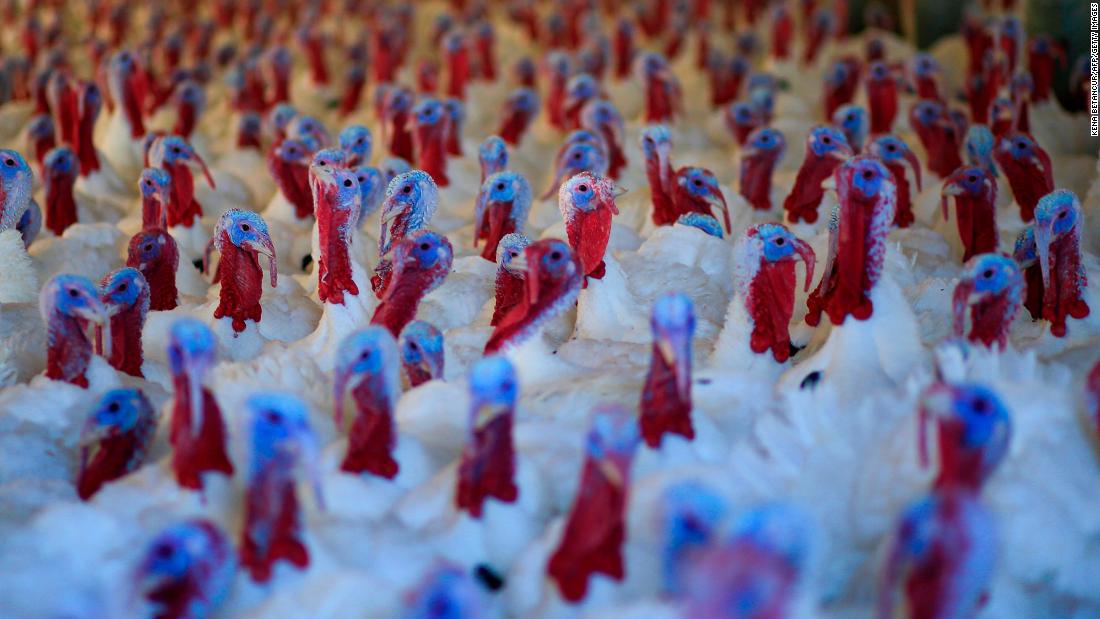 New York (CNN Business)Thanksgiving 2021 may feel a lot more like a normal holiday than last year's — many Americans have been vaccinated, and restrictions have eased across the country.

And that means bigger turkeys are back, too.

Grocery chains and retail analysts are expecting people to have bigger gatherings than last year. So they're stocking up on larger turkeys — 18 to 24 pounds — in a shift from last year's smaller ones of 12 to 14 pounds.

"Everybody is expecting big gatherings and bigger birds," said Chris DuBois, senior vice president for protein practice at IRI, who consults with grocers on their meat strategies. Turkeys take around 26 weeks to grow, he said, so companies place their orders for turkeys from suppliers early in the year. This year, grocers forecast Thanksgiving turkey orders with the "anticipation that [Covid-19] might be on its way out. The Delta variant wasn't even there."

Bristol Farms, a California chain of grocery stores, ordered its turkeys in February and March, when it was "banking on a return to normal," said Steve Howard, the vice president of merchandising. Last year, Bristol Farms had around a five-to-one ratio of fresh small birds — those that weigh 12 pounds — to bigger ones, which weigh 18 pounds and above. That's reversed this year.

"We're going to lean back into a larger bird," he said. "We expect a strong season as families again get together in larger groups." The company is also planning for larger orders of prepared sides like stuffing and potatoes.

Sam's Club is offering the same size range of turkeys as it did last year — ten to 24-pound birds— but it plans to stock more of the heavier, 18-pound turkeys and above this year. Sam's Club also last year slimmed down the sizes of sides such as mashed sweet potatoes in anticipation of smaller gatherings. This year, most sides have moved back to their larger, pre-pandemic portions.

"Our members told us [they're] ready to celebrate the holidays in a big way," said Erin Hulliberger, a spokesperson for the warehouse club, in an email.

Kroger surveyed 400 of its shoppers from April 6 to April 12, when its teams began planning for Thanksgiving, and found that 42% anticipated gathering with more people compared to last year, a spokesperson said in an email. The company is also expecting more people to trade up to more expensive turkeys this year and buy additional options such as bone-in breast turkey, so Kroger (KR) is stocking up on premium turkeys and specialty items.

To make a turkey heavier, farmers generally let it live longer, Stein said. The opposite goes for a lighter turkey.

"You're looking at 18 to 20 weeks old, probably for a larger size," he said. Generally, he noted, people serve a pound per person, so anything larger than that would likely be too much for a typical consumer.

At Koch's, growing season starts around June. But orders generally don't start coming in until October. That means that if demand is different from Koch's forecasts, the team has to make "on-the-fly" adjustments, like to slaughter schedules, he said. Another trick is to adjust the turkeys' diets.

"We don't use any growth hormones or steroids or anything like that since we're all natural and organic," he said. So when it comes to diet, "our only tool in our toolbox is changing some formula of the diet between wheat, soybean and corn," he explained. But often, "you have to deal with what you're dealt. You can't totally change mother nature."

Birds put on weight when it's cold, and stay slimmer when it's hot, Stein said.

"If there's a cold spell and the birds on average are weighing too much, you can sort of move up the timeline," he said. It's harder when the temperature spikes. Koch's can delay slaughter up to a point, but it "can't wait until it's too late because we have to make our deliveries," he said.

Sometimes, a turkey's size is decided by logistics. Cargill, which offers turkey through the Honeysuckle White, Shady Brook and Honest Turkey brands, is selling slightly larger birds this season. But that has nothing to do with deliberate planning to meet demand. Instead, the larger size is actually the result of another unexpected factor: supply chain disruptions.

This year, "average bird weights are slightly higher for both fresh and frozen birds due [to] processing delays," said Daniel Sullivan, a spokesperson for the company, in an email. "The larger birds are the result of birds being on feed longer than is typical."

www.cnn.com - 11 months ago
It's easy to forget that some good things happened in 2020.
Read More

www.cnn.com - 5 months ago
Here are some of the most famous people who have died in 2021.
Read More

The 3 defenses of Donald Trump

www.cnn.com - 10 months ago
Former President Donald Trump's lawyers have explained how will they defend him in his second impeachment trial against the charge that he incited the violent insurrection at the Capitol on January 6.
Read More

www.cnn.com - 2 years ago
CNN's Dr. Sanjay Gupta answers questions on the novel coronavirus, including how the virus spreads and precautions to take to avoid getting sick.
Read More
More News & Articles