Heading into the Rangers’ matchup with the Maple Leafs on Monday, Artemi Panarin had only recorded two shots on net in the previous three games.
Author: Mollie Walker
Published: 2021-10-19 12:16 am 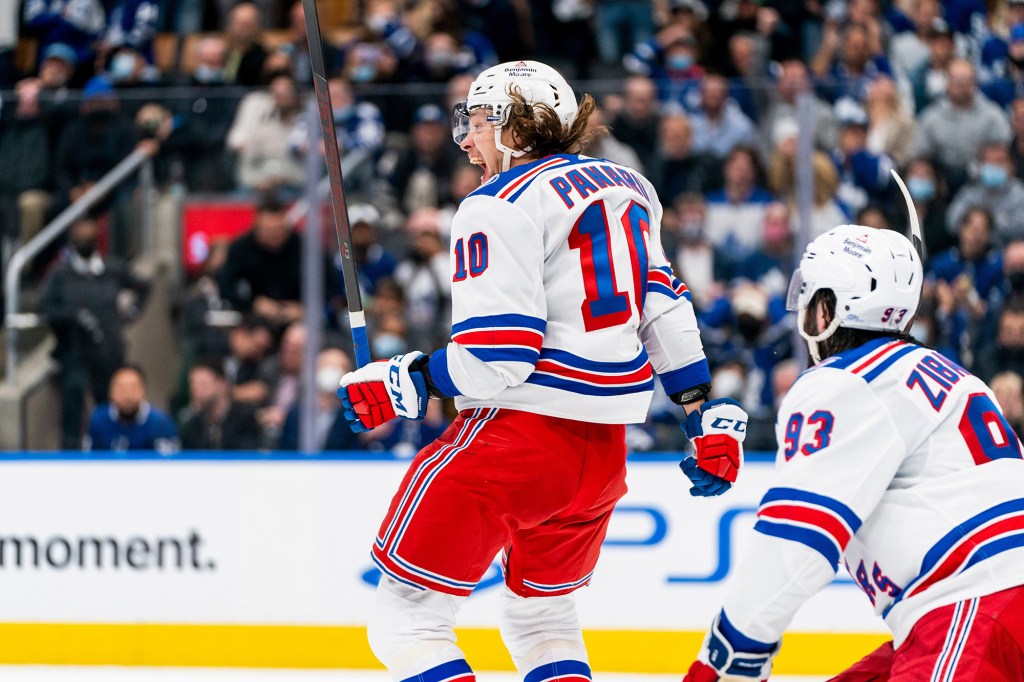 TORONTO — Heading into the Rangers’ matchup with the Maple Leafs on Monday night at Scotiabank Arena, Artemi Panarin had only recorded two shots on net in the previous three games.

Panarin broke through for his first goal of the season at 3:48 of overtime, taking a short pass from Mika Zibanejad and wristing the puck past Maple Leafs goalie Jack Campbell to secure the 2-1 victory. It was Panarin’s first OT winner with the Rangers.

“That was just a scramble, trying to get it over to him,” said Zibanejad, who scored the Rangers’ other goal in the first period. “He’s good. He’s good with those quick shots and finding areas to shoot at. Obviously, went in, it was nice to see him score tonight.”

Panarin, who logged an assist in each game against the Stars and Canadiens, was held to zero shots in two of the Rangers’ first three games of the season. The 29-year-old winger went just five games without registering a single shot on net last season — four of which came against the Islanders. It’s not something that happens often, but when it does, the Rangers’ offense often suffers because of it.

With the game tied 1-1 at the start of the third period, head coach Gerard Gallant put Panarin, Zibanejad and Chris Kreider on a line together to try and pump some life into his lineup. The trio logged 6:48 together, according to Natural Stat Trick, providing a bit of a spark for the Rangers amid a thinning top six with Ryan Strome in COVID-19 protocol and Kaapo Kakko on injured reserve.

“Well, I had to do something,” Gallant said. “After the second, we’re looking at each other saying, ‘That obviously wasn’t good at all.’ So we wanted to change something up and see how it worked. It was a little better, but again, we’re missing a couple of top players that the lines are a little unbalanced right now. It worked out OK and obviously in overtime, [Panarin] gets the big goal. That was good to see.”

The Rangers were 13-for-54 on faceoffs for a concerning 24.1 win percentage.

Morgan Barron, who was recalled Sunday from Hartford after Kakko’s IR designation, was a healthy scratch Monday after making the trip to Toronto. Barron scored a goal in each of his first two games with the Wolf Pack this season.

“He was called up as an extra player if we needed something,” Gallant said. “We had to scratch somebody. We love Morgan, but it’s about our team.”

nypost.com - 1 year ago
During a 25-minute stump speech in Des Moines, Iowa, the Democratic nominee repeated his campaign pledge that Americans earning less than $400,000 a year would not see their taxes raised if elected.
Read More

nypost.com - 3 months ago
Ben Slater, a former member of the Royal Military Police, has been trying to evacuate 400 Afghans and was reportedly arrested by the Taliban and thrown in prison.
Read More

nypost.com - 2 months ago
Sequoia National Park was shut down after the Colony and Paradise fires, which have grown to more than nine square miles and are threatening to destroy the world's largest trees, were ignited by lightening on Sept. 9.
Read More
More News & Articles