Much to his later regret, then-Secretary of State Colin Powell became the centerpiece of the George W. Bush administration's case for going to war in Iraq. That fact was noted in the obituaries and opinion pieces published after Powell's death Monday at
Author:
Published: 2021-10-19 08:49 am 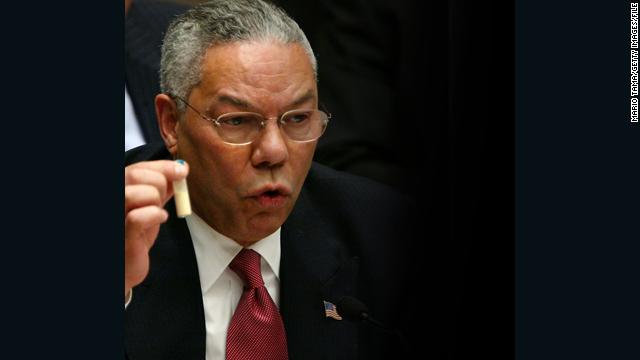 (CNN)Much to his later regret, then-Secretary of State Colin Powell became the centerpiece of the George W. Bush administration's case for going to war in Iraq. That fact was noted in the obituaries and opinion pieces published after Powell's death Monday at the age of 84. But the events of that era deserve closer examination.

Powell's presentation to the UN Security Council on February 5, 2003, six weeks before the American invasion of Iraq, laid out the case Bush wanted to make. But the case fell apart following the American occupation of Iraq, which revealed that Iraqi dictator Saddam Hussein didn't have an active weapons of destruction program, nor was Hussein allied to al Qaeda -- as Powell had asserted at the UN.

A hero of the first Gulf War, Powell was a widely admired figure in the Bush administration and had considerably more credibility than other senior officials when it came to Iraq. A Gallup poll before his UN speech found that Powell was trusted on US-Iraq policy by 63% of Americans versus only 24% who trusted Bush on the issue.

Recognizing this, Bush asked Powell to make the case to the UN about the necessity of the Iraq War.

Powell was more skeptical about the decision to invade Iraq than other Cabinet officials such as Vice President Dick Cheney. "If you break it, you own it," Powell told Bush in August 2002, according to Robert Draper's authoritative account of the run up to the invasion of Iraq, "To Start a War."

Cheney's office pressed for the most expansive case for the purported connections between Iraq's leader Saddam Hussein and al Qaeda in Powell's UN speech, which was supposed to be a replay of the kind of definitive presentation that Adlai Stevenson, the US ambassador to the United Nations, had given in 1962 at the height of the Cuban missile crisis. In that speech, Stevenson had used aerial photographs to successfully convince the world that the Soviets had installed nuclear missiles in Cuba.

Al Qaeda was responsible for the deadliest attack ever on American soil -- the 9/11 hijackings that killed nearly 3,000 people, brought down the twin towers of New York's World Trade Center and damaged the Pentagon. Connecting Hussein to the terrorists who engineered 9/11 was key to establishing a reason to go to war against Iraq.

Powell's deputy, Richard Armitage, remembered that the vice president's office wrote up a submission for his boss to deliver to the UN that included "every kitchen sink that you could imagine," including the notion that the lead 9/11 hijacker, Mohamed Atta, had met in Prague with an Iraqi intelligence agent before 9/11.

But, a month earlier, a CIA report titled "Iraq Support for Terrorism" had already concluded that "we are increasingly skeptical that Atta traveled to Prague in 2001 or met with the (Iraqi official)."

Deputy CIA Director John McLaughlin recalls that the White House material about the putative al Qaeda-Iraq connections had not been cleared by the CIA. McLaughlin told Powell and his staff, "This is not our draft. There's all sorts of garbage in here."

Despite the good-faith efforts to exclude questionable material about Hussein's connections to al Qaeda in Powell's speech, much that remained in the final text would later be discounted following the occupation of Iraq.

In hindsight, Powell did his job too well. His presentation was a bravura performance that seemed to establish beyond a doubt that Hussein was actively concealing an ongoing weapons of mass destruction program and was in league with al Qaeda. Powell asserted that "Saddam Hussein and his regime are concealing their efforts to produce more weapons of mass destruction," and he pointed to a "sinister nexus between Iraq and the al Qaeda terrorist network."

At one point, to show the dangers WMD can pose, the secretary of state dramatically brandished a small vial of a white powder of supposed anthrax saying "about this amount ... shut down the US Senate in the fall of 2001."

As Powell gave his speech, sitting directly behind him was CIA Director George Tenet, giving a visual imprimatur to what Powell was saying.

One section of Powell's UN speech tried to make the case for an emerging alliance between Saddam and al Qaeda. "Iraq today harbors a deadly terrorist network headed by Abu Musab al-Zarqawi, an associate and collaborator of Osama bin Laden and his al Qaeda lieutenants," he said.

But Powell's speech made a gossamer-thin case for the Iraq-al Qaeda nexus, even with the faulty intelligence that was then available. The relationship between Zarqawi and al Qaeda was already known to be far from clear-cut. Until 2004, Zarqawi ran an organization separate from al Qaeda, known as Tawhid, whose name corresponds to the idea of monotheism in Arabic. Indeed, Shadi Abdalla, a member of Tawhid who was apprehended in Germany in 2002, told investigators that the group saw itself to be in competition with al Qaeda.

Even after the Iraq war began in March 2003, Zarqawi was still running his own outfit independent of al Qaeda. Unlikely support for that fact came from Secretary of Defense Donald Rumsfeld, who said of Zarqawi at a Pentagon briefing in June 2004, "Someone could legitimately say he's not al Qaeda."

On October 25, 2005, the CIA released a report that finally disposed of the myth that Saddam and Zarqawi had ever been in league, assessing that prior to the war, "the regime did not a have a relationship, harbor, or turn a blind eye towards Zarqawi."

An additional exhibit in Powell's UN speech that was intended to prove an al Qaeda-Saddam-WMD nexus was the Kurdish Islamist group, Ansar al-Islam, which was experimenting with crude chemical weapons in its training camp in northeastern Iraq, a facility that was described as a "poison factory" by Powell in an aerial photograph of the camp that Powell displayed in his UN presentation.

However, the only reason that Ansar al-Islam could exist in that part of Kurdish Iraq was because the US Air Force had been enforcing a no-fly zone in the region for more than a decade, which meant that the Pentagon had more control over that part of Kurdistan than Saddam did.

It was Powell's speech that will be long remembered as making the best public case for the Iraq war. And it was a speech that would later be shown to be rife with false assertions and erroneous assumptions once the United States had occupied Iraq.

The CIA director George Tenet later wrote, seemingly without irony, of Powell's speech "it was a great presentation, but unfortunately the substance didn't hold up."

In 2005, Powell told ABC News' Barbara Walters that his UN speech was "painful" for him and a permanent "blot" on his record.

Powell's admission came as Iraq was descending into an intense civil war. Ultimately, more than 4,400 US troops would die in Iraq, as well as many scores of thousands of Iraqi civilians.

Powell grew up in the South Bronx, the son of Jamaican immigrants. He rose from serving in the jungles of Vietnam where he was as a young officer to become former President Ronald Reagan's national security adviser and later the first Black secretary of state.

His speech at the UN doesn't define Powell's extraordinary career, but he came to bitterly regret ever giving it.

College admissions scandal: Abdelaziz and Wilson are first parents to be found guilty

www.cnn.com - 2 months ago
A federal jury on Friday found two wealthy parents charged in a national conspiracy that facilitated cheating on college admissions for their children guilty on all counts, the US Attorney's Office announced.
Read More

www.cnn.com - 3 years ago
The New Jersey attorney general's office filed a lawsuit against members of the billionaire family behind pharmaceutical giant Purdue Pharma, alleging that the company's marketing strategies overstated the benefits of their opioid drugs while also
Read More

Crashing crypto prices spooked some new investors. Others are doubling down

www.cnn.com - 6 months ago
Grant McGurn is really glad he jumped on a FaceTime call with his dad.
Read More

www.cnn.com - 2 weeks ago
CNN's Laura Jarrett breaks down Julius Jones' case after an audio tape was made public containing what could be the death row inmate's last words. Jones is scheduled to be executed today at 4 p.m. CT unless Oklahoma Gov. Kevin Stitt grants him clemency.
Read More
More News & Articles