It was the deadliest attack in Damascus in several years, and especially rare since government troops in 2018 captured suburbs once held by insurgents in Syria's decade-long conflict. (Image credit: AP)
Author: The Associated Press
Published: 2021-10-20 05:23 am 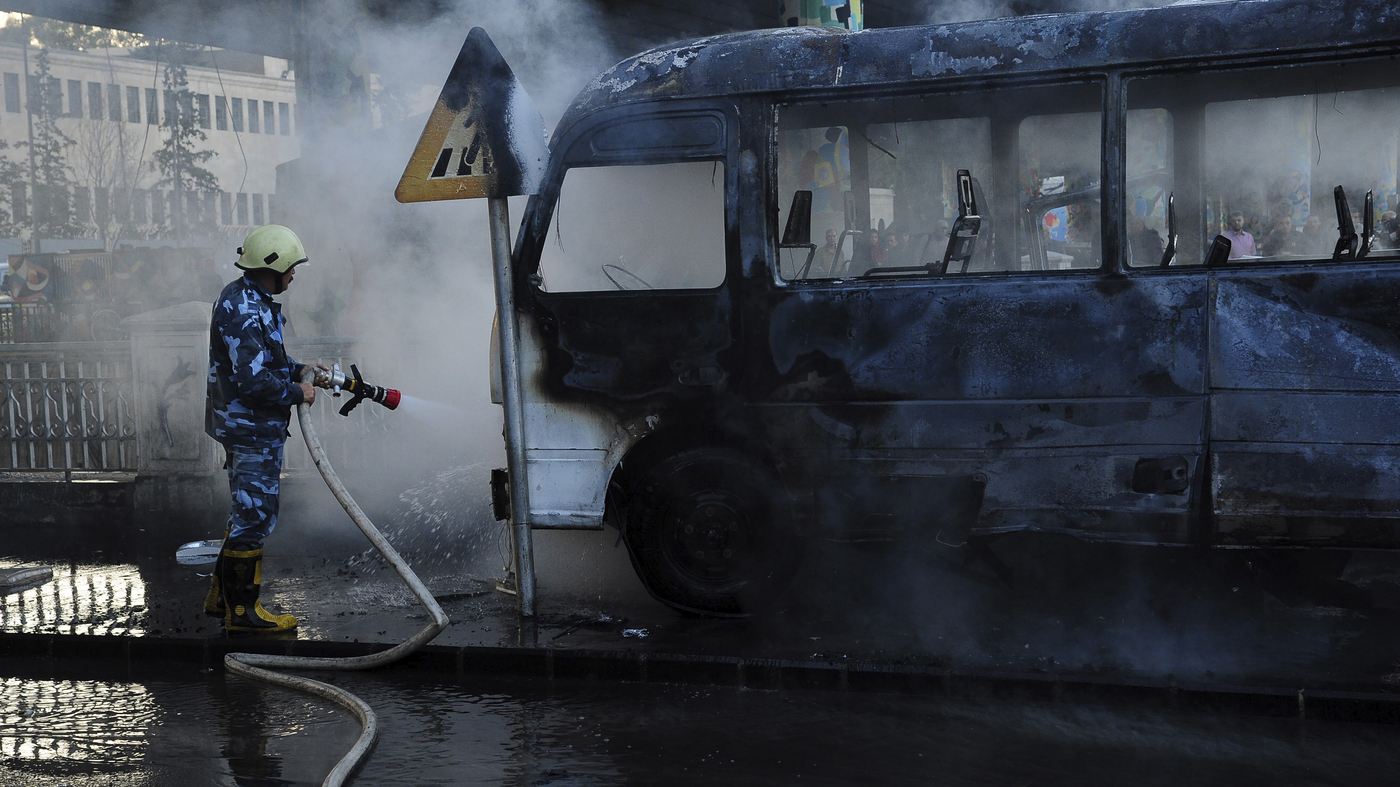 It was the deadliest attack in Damascus in several years, and especially rare since government troops in 2018 captured suburbs once held by insurgents in Syria's decade-long conflict.

State media had earlier described the attack as a roadside bombing. But an unnamed Syrian military official said the explosions were caused by bombs that had been earlier attached to the vehicle's exterior. A third bomb fell from the bus and was dismantled by troops after the two initial explosions, the official said.

No one immediately claimed responsibility for the attack, but insurgents and jihadists still reside within the country's borders and seek the overthrow of President Bashar Assad.

It was unclear if the bombs were detonated from a distance or if they had been timed to go off. The military official, quoted in state media, said the bombs went off shortly before 7 a.m. local time. It was not immediately clear if all the dead were bus passengers.

The explosion went off at a busy juncture in the Syrian capital, near a main bus transfer point under a bridge known as President's Bridge. Commuters converge and head out to different parts of the capital and its suburbs from the area.

Syrian state TV showed footage of the charred bus, saying the blasts occurred as people headed to work and school. Images showed smoke from the extinguished bus rising as soldiers hosed down the charred vehicle. A puddle of water formed under the bridge, where pictures of Assad were posted on the walls. Onlookers converged on the bridge to watch, as traffic appeared to have returned to normal.

Over an hour after the blast occurred, workers cleared the scene of the explosion, and the burnt-out bus was removed.

"It is a cowardly act," Damascus police commander Maj. Gen. Hussein Jumaa told state TV, adding that a police force had cordoned off the area immediately and made sure there were no more bombs. He urged people to inform authorities about any suspicious object they see.

Jumaa said one of the wounded had succumbed to his wounds later Wednesday raising the death toll to 14.

Assad's forces now control much of Syria after military help from his allies Russia and Iran helped tip the balance of power in his favor.

One of the last major explosions to take place in Damascus was in 2017 — when suicide bombers hit a judicial office building and a restaurant, killing nearly 60 people. The attacks were claimed by Islamic State group militants. The extremist organization lost its territorial holds in Syria in 2019, but it continues to represent a threat with sleeper cells, mostly hiding in Syria's expansive desert.

Some territories are still held by armed opposition in the country's north, where U.S. and Turkish are also deployed.

Syria's conflict that began in March 2011 has left more than 350,000 people dead and displaced half the country's population, including five million who are refugees abroad.

In August, Syria's state media said a short circuit triggered an explosion in the gas tank of a bus carrying soldiers, killing one and wounding three.

www.npr.org - 5 months ago
On Tuesday, voters in New York City cast ballots in the Democratic primary for mayor. And it was the first time that the city used a ranked-choice voting system.
Read More

How Aid Efforts Are Going In Haiti After Earthquake

www.npr.org - 10 months ago
Sister Andree, a retired nun who lives in the south of France, turns 117 on Thursday. She says she had no COVID-19 symptoms, but did have to isolate in her room at the nursing home.
Read More
More News & Articles