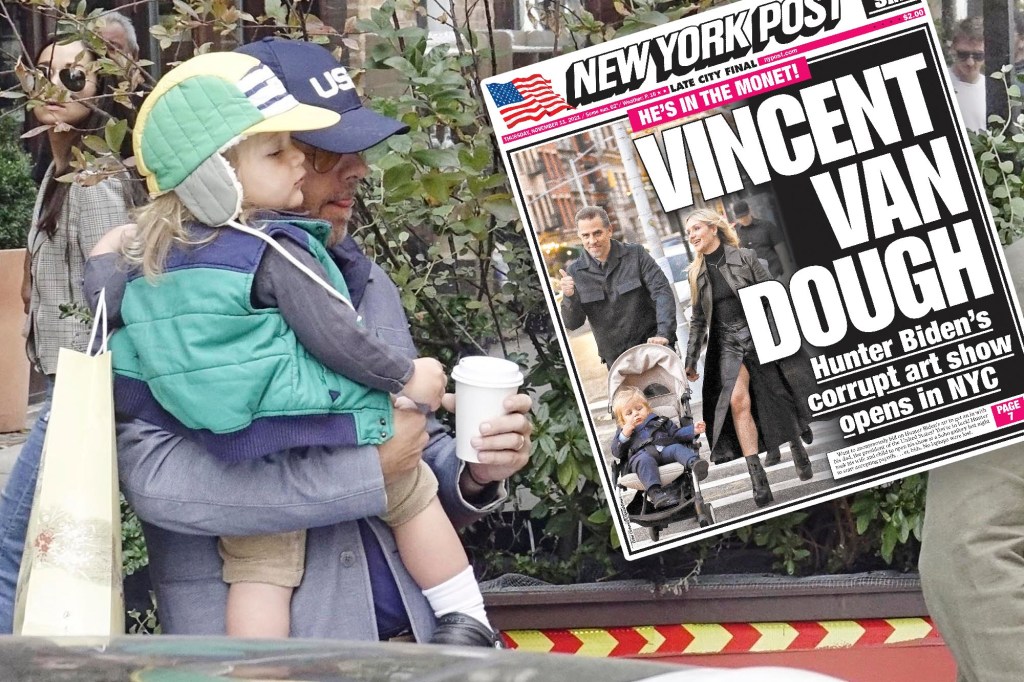 Hunter Biden checked out of a Manhattan hotel Thursday following a party to celebrate his solo art show — as controversy over the $500,000 price tags on some of his paintings apparently killed a plan to open the exhibit to the public.

The first son didn’t comment as he and wife Melissa Cohen — both wearing red outfits — left the Greenwich Hotel with their 1-1/2-year-old son, Beau, shortly before noon.

The night before, the novice, self-taught artist joined about 60 guests — including President Biden’s sister, Valerie Biden Owens — at the Georges Berges Gallery in Soho, where Hunter Biden’s show, “The Journey Home,” opened on Oct. 23 by appointment only.

Curtains hung in the storefront windows kept outsiders from observing the event, although a videographer was spotted recording Hunter Biden and his family, along with daughter Maisy Biden, get escorted inside by gallery owner Georges Berges on Wednesday evening.

A two-person video crew also recorded the scene as Hunter Biden and his wife left around 9 p.m.

Last month, Mother Jones reported that a documentary crew roamed around the earlier opening of Hunter Biden’s art show in Los Angeles and the Daily Mail posted a video clip that showed a camera operator standing on a pedestal and another wearing a portable rig.

It’s unclear who’s behind the planned documentary and when or how it’s set for release.

The Soho show is scheduled to run through Monday and the gallery planned to allow the public to view it starting Thursday, the New York Times reported last week.

But the front door was locked when The Post showed up, and a gallery worker who used a key to briefly open it from the inside said that idea had been scrapped.

“Sorry. Things are very fluid and things have changed,” the employee said.

“It will be appointment-only for the remainder of the show.”

An email to the gallery seeking an explanation for the change in plans wasn’t immediately returned.

The exorbitant prices for Hunter Biden’s paintings — which start at $75,000 each — have sparked suspicion they could result in influence peddling, with US Rep. Ken Buck (R-Colo.) last month calling on Attorney General Merrick Garland to appoint a special prosecutor to investigate any sales.

The White House has said it addressed those concerns by striking an agreement with Berges to keep the identities of any buyers private, but that plan has been ridiculed by leading ethics experts.

“There is no ethics program in the world that can be built around the head of state’s staff working with a dealer to keep the public in the dark about the identities of individuals who pay vast sums to the leader’s family member for subjectively priced items of no intrinsic value,” Walter Shaub, who ran the US Office of Government Ethics under then-President Barack Obama, wrote last month in a since-deleted tweet.

nypost.com - 3 months ago
Facebook in 2019 began classifying countries in a "tier" system that dictated the amount of resources used to moderate content posted on country platforms, according to a new report.
Read More

nypost.com - 10 months ago
A woman randomly stabbed a straphanger in the arm onboard a Queens train Tuesday morning, cops said. The 56-year-old victim was on board a Manhattan-bound A train at the Broad Channel station around 8:20 a.m. when a woman, believed to be homeless, suddenl
Read More

nypost.com - 2 months ago
Art handlers packed up a statue of Jefferson in a wooden crate after a mayoral commission voted to banish the likeness of the nation's third president from City Hall.
Read More