Detroit rocker Kid R0ck roasts millennials in his new anti-woke anthem, “Don’t Tell Me How to Live,” in which he slams wokeness and how America has become “a nation full of pussies.” “Years ago, we all thought it was a
Author: Alana Mastrangelo
Published: 2021-11-21 08:16 am 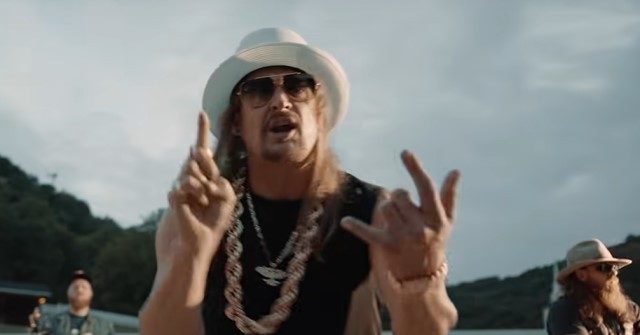 Detroit rocker Kid R0ck roasts millennials in his new anti-woke anthem, “Don’t Tell Me How to Live,” in which he slams wokeness and how America has become “a nation full of pussies.”

“Years ago, we all thought it was a joke, see? That every kid got a motherfucking trophy, but yo homie, here’s a situation. A nation of pussies is our next generation,” the artist, born Robert James Ritchie, raps in his new song, which was released Friday.

“And these minions, and their agendas. Every opinion has a millennial offended,” the lyrics add. “But this amendment one, it rings true, and if it don’t descend bitch, then see number two.”

The song, featuring the Canadian country rock band Monster Truck, goes on to proclaim, “Ain’t nobody gonna tell me how to live.”

“Ain’t nothing new, right church, wrong pew. Get a clue or prove your fake news and views. Can all kick the bottom of my motherfucking shoe. I’m the last of a few still screaming ‘fuck you,'” the lyrics continue.

The music video sets a playful tone, with the singer wearing one outfit emblazoned with the message “Social Media Sucks” in front of footage of the infamously-memed wailing protester from the Trump inauguration. Later, he rides a giant flying middle finger — labeled the “Kid Rock-It” — with a gun in one hand and a bottle of whiskey in the other.

On Friday, Kid Rock also promoted the song on his Instagram account, posting the single’s cover — an image of the Statue of Liberty wearing a mask.”

This is not the first time Kid Rock has openly defied political correctness.

In 2019, the rocker made waves when he went on a profanity-laced rant about Oprah Winfrey, The View co-host Joy Behar, and comedian Kathy Griffin.

“I’m not a bad guy I’m just an honest guy who says hey I don’t like Oprah Winfrey or Joy Behar. They can suck dicks sideways,” he said at the time.

That same year, Kid Rock also slammed pop superstar Taylor Swift, saying she has only aligned herself with Democrats because she “wants to be in movies.”

Taylor Swift wants to be a democrat because she wants to be in movies….period. And it looks like she will suck the door knob off Hollyweird to get there. Oldest move in the book. Good luck girl.

Last year, the rocker headlined a Michigan campaign event for then-President Donald Trump, energizing the crowd to cheer for the “greatest country in the world” and performing a collection of his hits for the president’s supporters in Macomb County.

Kid Rock also backed Republican candidate John James for U.S. Senate in Michigan, telling voters that unlike his opponent, James “was successful before he got into politics, rather than use politics to be successful.”

Joe Biden: No More Coal or Oil Plants in America

www.breitbart.com - 1 year ago
Former Vice President Joe Biden said during the presidential debate on Tuesday night that, under his administration, the country will not build any more coal or oil plants in America.
Read More