Former UFC star and winner of Season 1 of "The Ultimate Fighter," Diego Sanchez has been hospitalized with pneumonia after a weeks-long battle with the COVID-19.
Author: Jenna Lemoncelli
Published: 2021-11-29 05:57 pm 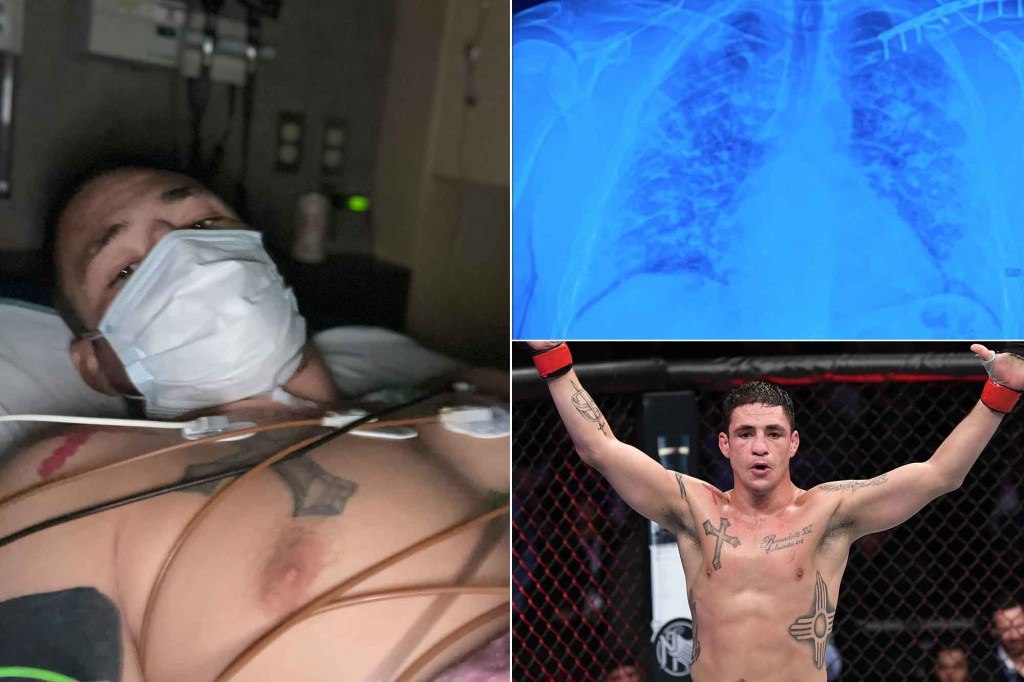 Former UFC star and winner of Season 1 of “The Ultimate Fighter,” Diego Sanchez has been hospitalized with pneumonia after a weeks-long battle with the COVID-19.

On Nov. 25, Sanchez tweeted a photo of himself in a hospital bed, hooked up to wires.

“Pneumonia Covid never give up,” said Sanchez, who was pictured wearing a mask and shirtless.

The next day, Sanchez said he was dealing with blood clots in both of his legs, tweeting, “Covid is no motha f–kin joke.” He also shared an X-ray photo of his lungs on Instagram, and wrote that he had “low oxygen numbers,” adding, “This has been some [trying] times.”

The 39-year-old said he is unvaccinated against COVID-19, though he stressed folks shouldn’t jump to conclusions over that fact.

“I’m not a Antivaxxer damnit!” Sanchez tweeted. “Just waiting for the best one to arrive tech is only advancing at light speeds right.

“I’m going thru it but I can’t say I’m sold on the vax at the current moment in time.”

Sachez’s contract with the UFC was terminated in April over concerns about his health, days before his Fight Night bout with Donald Cerrone, according to UFC president Dana White.

Ahead of the fight, an attorney for Sanchez told the UFC that his client could not confirm his short or long-term health was not compromised, leading White to deny Sanchez the opportunity to fight.

The UFC was also concerned about the behavior of Sanchez’s longtime coach Joshua Fabia. White told Yahoo Sports that Fabia “is batsh-t nuts.”

Prior to being hospitalized, Sanchez said on Nov. 19 that he was feeling better after qualifying for regeneron monoclonal antibodies. His health battle, however, has continued.

“This has been the fight of a fighters life,” he tweeted Monday. “No fight camp or opponent has dominated me like this. It’s been a long fight last night I think I finally win a round with the help of my corner God, Jesus, Holy Spirit & the many candles prayers lit in the hearts of my loved ones.”

Sanchez earned a 30-13 record over his 15-year UFC career, and won the first season of “The Ultimate Fighter.”

His last fight at UFC 253 in September 2020 ended in a loss to Jake Matthews via unanimous decision.

nypost.com - 3 months ago
Robert Saleh refuses to sound an alarm on Zach Wilson and his struggles.
Read More

nypost.com - 1 year ago
The man accused of derailing a Manhattan subway train by tossing metal construction debris on to the tracks on Sunday was released without bail on a prior case, outraging one victim’s husband. “She is very scared and has a heart problem,” said Plymouth
Read More

nypost.com - 4 months ago
Could this be the win that turns the Giants season around?
Read More

nypost.com - 1 year ago
No declaration from the Rangers regarding their intentions whether to fill the role of captain that has been vacant since Ryan McDonagh was sent away at the 2018 trade deadline. “We’re going to continue to evaluate that situation,” David Quinn said on
Read More
More News & Articles