Meadows in contact with Jan. 6 House panel after talk of contempt vote

Rep. Bennie Thompson (D-Miss.) said in a statement Tuesday that Meadows "has produced records to the committee and will soon appear for an initial deposition.
Author: Juliegrace Brufke, Samuel Chamberlain
Published: 2021-11-30 01:50 pm 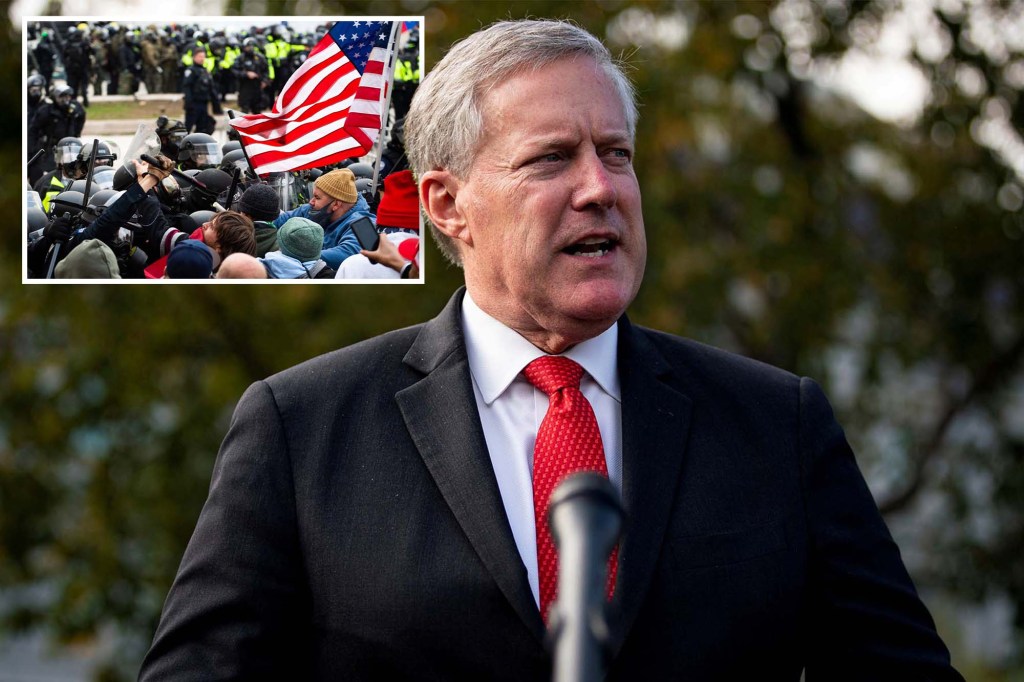 Former Trump White House chief of staff Mark Meadows “has been engaging” with the House select committee investigating the Jan. 6 Capitol riot, according to the panel’s chairman — at least temporarily ending talk of holding Meadows in contempt of Congress.

Rep. Bennie Thompson (D-Miss.) said in a statement Tuesday that Meadows “has produced records to the committee and will soon appear for an initial deposition.

“The Select Committee expects all witnesses, including Mr. Meadows, to provide all information requested and that the Select Committee is lawfully entitled to receive,” Thompson said. “The committee will continue to assess his degree of compliance with our subpoena after the deposition.”

Meadows was initially subpoenaed by the committee in September along with fellow Trump ally Steve Bannon, who has since been indicted on two counts of contempt of Congress after he refused to produce documents or give testimony.

In a letter to Meadows, Thompson justified the subpoena by citing reports that the former North Carolina Congressman “engaged in multiple elements of the planning and preparation of efforts to contest the presidential election and delay the counting of electoral votes.”

Meadows’ lawyer has argued that his client cannot comply with the subpoena while the courts determine whether former President Donald Trump has the right to claim executive privilege over certain records sought by the committee. The Biden White House has said it will not stand in the committee’s way of pursuing the documents.

For its part, the panel has argued that it has questions for Meadows that do not directly involve conversations with Trump and could not fall under executive privilege claims.

Meadows’ lawyer, George Terwilliger, said in a statement Tuesday that he was working with the committee “to see if we can reach an accommodation that does not require Mr. Meadows to waive Executive Privilege or to forfeit the long-standing position that senior White House aides cannot be compelled to testify before Congress,” as Trump has argued.

Also Tuesday, the DC federal appeals court was slated to hear arguments from attorneys representing Trump and the select committee after a federal judge ruled earlier this month that the National Archives could turn over records requested by the panel. Regardless of the appeals court outcome, the case is likely to be appealed to the Supreme Court.

On Wednesday, the select committee is scheduled to hold a contempt vote against former Justice Department official Jeffrey Clark, who has similarly claimed that his discussions with Trump fall under executive privilege and declined to answer the committee’s questions.

nypost.com - 1 year ago
A woman’s headless, mutilated body was found by two workers on a dead-end street in Baltimore, police said. The dismembered corpse – which also was also missing its feet and hands – was discovered early Monday by two people walking through a neighborhood
Read More

nypost.com - 1 year ago
A former Notre Dame men’s basketball assistant coach is accused of recording two women without their consent while naked or when he had sex with one of them, prosecutors said. Ryan Ayers, who left the program in September, surrendered early Thursday at a
Read More

nypost.com - 1 day ago
Robinhood was sued by retail investors who said they lost billions when they were stopped by the app from trading "meme stocks" last year.
Read More

nypost.com - 1 year ago
Socialite Rebecca Grossman has been charged with murder and vehicular manslaughter for allegedly plowing her Mercedes-Benz into two young boys in Los Angeles, according to reports. Grossman, 57, was arrested Sept. 29 after police said she struck and kille
Read More
More News & Articles