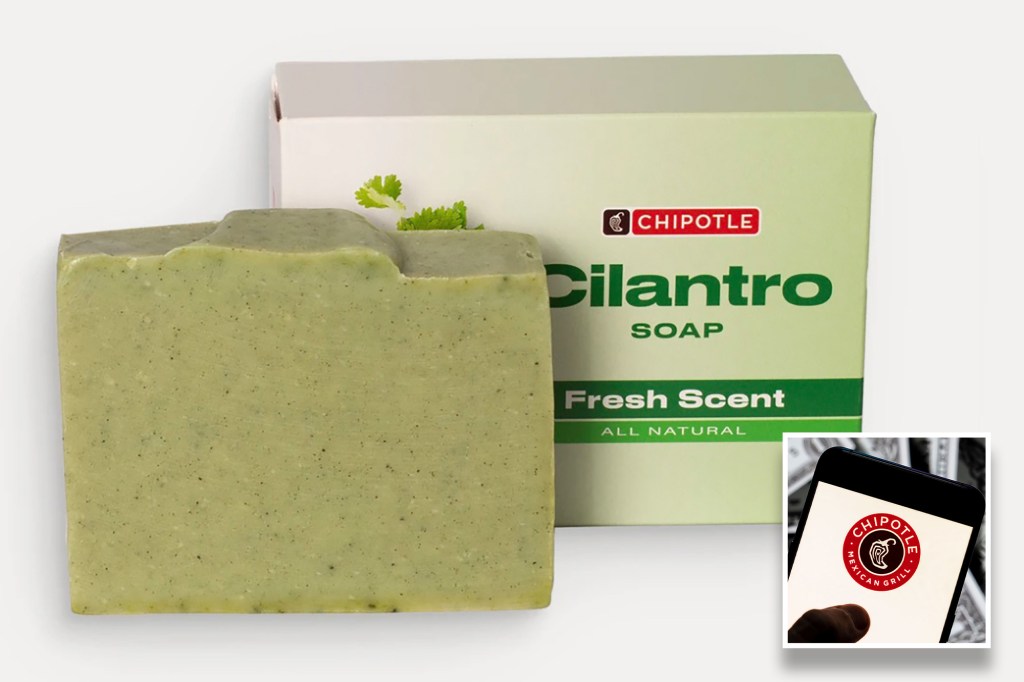 Chipotle has a swag store?

Along with burrito bowls, the Mexican-inspired fast-casual chain sells its own merch, with a cilantro-infused soap among its listed goods.

If you’re one of the millions who abhor the bright green garnish, you’ll perhaps be surprised to learn that the $8 herb-infused soap sold out just a day after its launch, according to CNN Business.

“Just make sure they don’t eat it,” the description warns.

Indeed, cilantro is a polarizing herb that few know better than the brand. Back in July, Chipotle stoked debate on social media when it proposed that “not liking cilantro is something you should try keeping to yourself.” The brand has also been known to instigate the anti-cilantro camp in the past.

“A moment of silence for the people who think cilantro tastes like soap,” Chipotle wrote in 2019, garnering more than 12,000 likes on Twitter. When one follower that it “taste[s] worse than soap, “So what you’re saying is you have eaten soap before?”

That controversy might have just given their merchandisers an idea. According to Chris Brandt, chief marketing officer at Chipotle, the gag gift “plays into a larger trend of turning digital moments into real-life experiences,” he said in a statement.

Those who love the herb say it has an almost citrusy flavor and strong aroma that is inextricable from some traditional dishes, while others have said, as previously suggested, it tastes like soap. But all of that depends on several factors, including genetics and, perhaps, how much cleaning you do.

According to research, 14% to 21% of people of East Asian, African and Caucasian origins are prone to this distaste, while just 3% to 7% of those with roots in South Asia, Latin America and the Middle East avoid the herb. Some scientists believe this is, in part, influence by their culture, as one’s environment can have an impact on their preferences at a cellular level.

The soap connection isn’t far off. Aromatic plants including coriander are known to contain a flavor compound called S-Linalool; at the same time, more than 60% of scented cleaning products use essential oils from such plants to perfume their products and used as well in the formulation of insecticides. Other naturally-occurring chemical compounds, namely (E)-2-alkenals and n-aldehydes, are also found in coriander and soaps, and lotions alike, as well many types of bugs. That olfactory insect, the stink bug — it owes its earthy stench to aldehydes.

These if somewhat incongruous associations are responsible for cilantro’s soap-like odor and taste, and, depending on your individual taste receptor genes, you may find this pleasing or pungent — something still being studied by genetic researchers.

In the meantime, for those who can’t stand cilantro, take this astute advice from one Twitter user: “If you don’t like cilantro or if it tastes like soap to you…. maybe Mexican food isn’t the right choice.”

nypost.com - 2 months ago
Artemi Panarin and Chris Kreider scored two goals apiece to lead the Rangers to a 5-3 victory over the Blue Jackets on Saturday night in Columbus, Ohio.
Read More

nypost.com - 12 months ago
Yesterday it was revealed that Hunter Biden, the embattled son of President Biden, will release a memoir in April called “Beautiful Things.” But New York Post columnist Kyle Smith got an exclusive first look, thanks to a draft he found on a laptop Compute
Read More

nypost.com - 3 weeks ago
The case was detected in a child at the 911 COVID Testing site set up at the Getty Center in Los Angeles on January 5, 2022.
Read More
More News & Articles