The court also sentenced U Win Myint, the former president, and U Myo Aung, the ousted mayor of Naypyidaw.
Author: Richard C. Paddock
Published: 2021-12-06 02:43 am 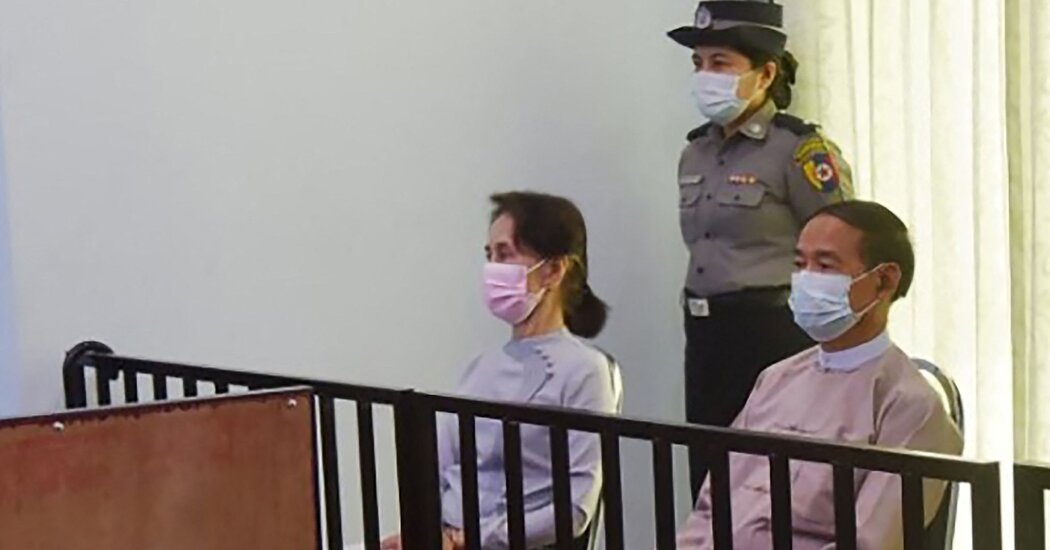 Mr. Win Myint and U Myo Aung, the ousted mayor of the capital city, Naypyidaw, were both found guilty of responsibility along with Ms. Aung San Suu Kyi for two letters sent by the National League for Democracy after the coup urging the international community not to recognize the regime and declaring all laws enacted by the junta to be illegal.

The defense argued that none of the defendants could be held culpable for the letters since all three were in custody at the time that the letters were sent.

Mr. Win Myint, 70, assumed the presidency in 2018 after he was chosen by Ms. Aung San Suu Kyi, who is constitutionally barred from holding that office.

He testified during the trial that after his arrest, two army officers demanded he resign on the grounds of ill health and warned him that refusing would cause trouble. He said he told them he would rather die.

Like Ms. Aung San Suu Kyi, he had also been charged with breaking Covid regulations by standing outside in a face mask and face shield while waving to supporters passing by in vehicles. He denied violating any health rules.

Based on a complaint filed by the regime with the police, Ms. Aung San Suu Kyi and Mr. Win Myint are expected to face one count of corruption alleging that they benefited from the government’s acquisition and rental of a helicopter.

The two are also among 16 leaders of the National League for Democracy who will face charges of electoral fraud brought by Myanmar’s election commission.

Mr. Myo Aung, a 70-year-old physician who was appointed mayor in 2016 by former President Htin Kyaw, lived next door to Ms. Aung San Suu Kyi in Naypyidaw. When he saw military vehicles outside her house on the morning of the coup, he went to check on her and was arrested.

He is also a co-defendant with Ms. Aung San Suu Kyi in her ongoing corruption trial. He is accused of granting permission to build on land in the capital in exchange for money that was then given to National League for Democracy candidates, state media reported. He denies the charge.

Indiana and Ohio are expanding their pools of vaccine-eligible residents.

www.nytimes.com - 10 months ago
More states begin to further move in getting more people in line for shots.
Read More

Do Gun Rights Depend on Abortion Rights? That’s Now Up to the Supreme Court.

www.nytimes.com - 3 months ago
The outcome of a Texas law targeting abortion will provide the answer.
Read More

www.nytimes.com - 9 months ago
The diverging recoveries underway in the United States and Europe underscore the value of effective vaccination and public spending in the pandemic.
Read More