Ukraine celebrated its Day of the Armed Forces holiday with a showy display of American armored vehicles and weapons in an attempt to flex its power as tensions escalate with neighboring Russia.
Author: Ben Kesslen
Published: 2021-12-07 11:43 am 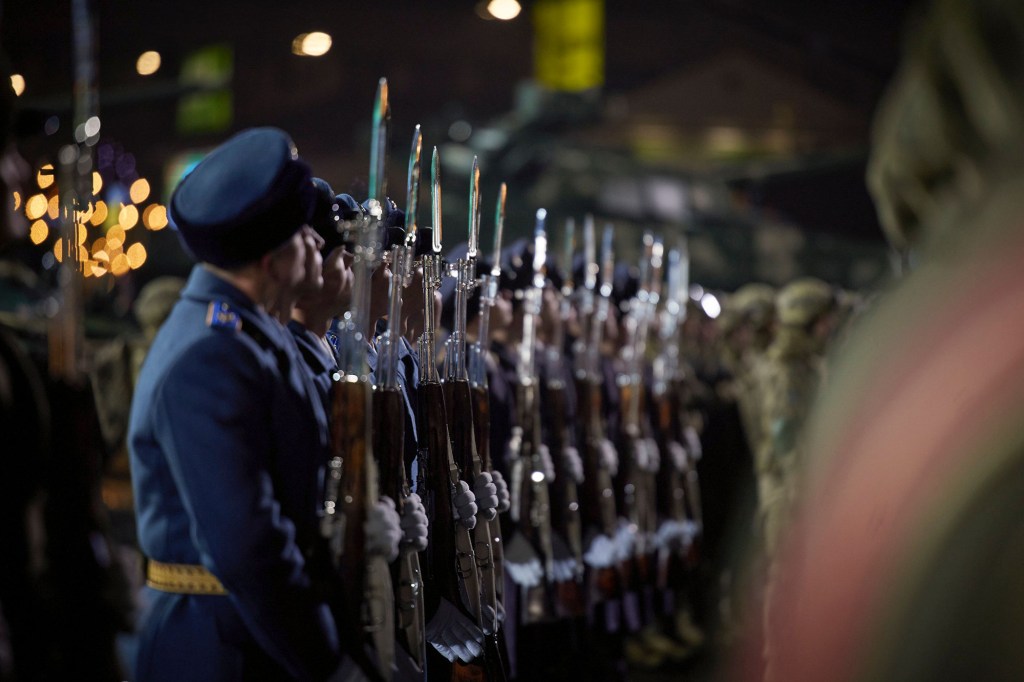 Ukraine celebrated its Day of the Armed Forces holiday Monday with a showy display of American armored vehicles and weapons in an attempt to flex its power as tensions escalate with neighboring Russia.

“The servicemen of the Armed Forces of Ukraine continue to fulfill their most important mission – to defend the freedom and sovereignty of the state from the Russian aggressor,” Ukrainian President Volodymyr Zelensky said in a statement obtained by Reuters. “The Ukrainian army … is confident in its strength and able to thwart any conquest plans of the enemy.”

The exhibition came on the same day as the publication by Fox News of satellite images showing tens of thousands of Russian forces gathering at several key strategic points along the Ukrainian border.

US officials have expressed fears that Russia could launch an invasion of Ukrainian territory as soon as early next year and deploy up to 175,000 troops in the effort.

On Monday, US Secretary of State Antony Blinken spoke to Zelensky by phone and restated America’s “unwavering support for Ukraine’s sovereignty, independence, and territorial integrity in the face of Russian aggression,” according to the State Department.

The department added that Blinken and Zelensky agreed on the need for “full restoration of Ukrainian sovereignty over its internationally recognized borders” — including the province of Crimea, which was annexed by Russia in 2014.

According to Reuters, Zelensky marked the public holiday by meeting with soldiers in the war-torn Donetsk region before flying on to the northeastern city of Kharkiv. While there, Zelensky talked up the country’s relationship with NATO countries that have provided Ukraine with weapons and other military supplies.

Russia has described Ukrainian membership in NATO as a “red line,” while Ukraine has urged the military alliance to accelerate its entry and said Moscow had no right to veto such a move. NATO’s leadership has been supportive but said Ukraine must carry out defense reforms and tackle corruption first.

The holiday marks the 30th anniversary of the founding of the armed forces of Ukraine following the collapse of the Soviet Union in 1991.

Parolee charged with hurling slur at Asian man, shoving him on subway

Not so clubby anymore: Clubhouse is no longer invite-only

nypost.com - 6 months ago
Live audio app Clubhouse has removed its invite system so that anyone can join the platform, it said on Wednesday. The social app, which saw explosive early growth during the COVID-19 pandemic, previously required people to be invited by an existing user
Read More

nypost.com - 1 year ago
Bonilla is accused of opening fire on the three teens during a basketball game at George Walker Jr. Park in Cypress Hills around 6:40 p.m. on a Sunday evening.
Read More