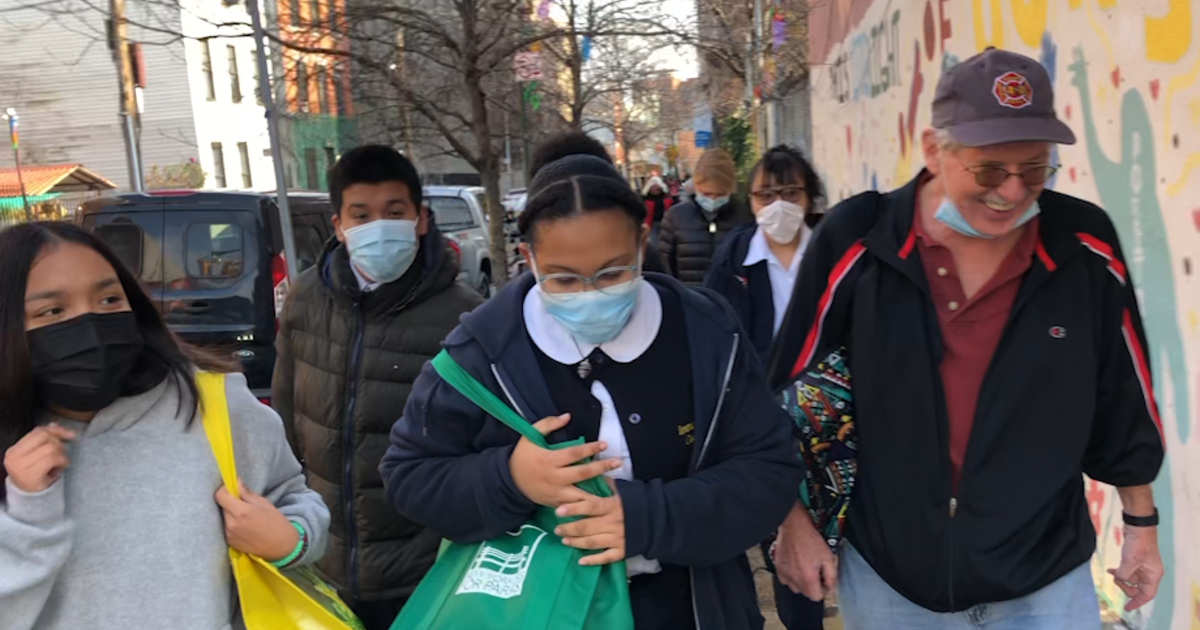 Marty Rogers has been feeding the homeless for 44 years. And in those four decades, the dad from Bronx, New York, has organized a Thanksgiving dinner for those in need through his church, Immaculate Conception.

Every year, his three kids help him serve up the holiday meal. He said even though they're all grown now, he can count on them to return to the Bronx and help him each Thanksgiving.

But a few years ago, Marty was inspired to do even more than just an annual meal. It all started when a student at Immaculate Conception School asked her teacher what they could do to help the homeless. The school asked Marty, as a member of the church with a long history of feeding people in need, to help organize something.

Marty came up with what are now called "Hope Walks." A few times a year, Marty and volunteers from the church and school would get together to make sandwiches and then walk around their South Bronx neighborhood and ask people if they'd like some food.

"We give them space, we say, 'Hello brother, we have something to eat or drink, would you like it?' It's always a choice," Marty told CBS News. Marty and his group try to make each person feel comfortable, and they also ask each person their name. "By the end, we might be cracking jokes."

When the pandemic hit and many things shut down, Marty decided to ramp up his efforts. "No one was out. Everyone was quarantining. But, who is out, is more and more people who are homeless," he said. "Now, it's staring us really in the face. And we had the conversation and we started going out once a week with our supplies, and then we said, 'This has to be more.' And we went three times a week."

Marty has continued the Hope Walks three times a week, with various volunteers and nuns from the church, Immaculate Conception School and Cristo Rey High School in Harlem – and he also credited his wife for helping him make dozens of sandwiches.

Each week, they make homemade peanut butter and jellies and turkey sandwiches and pack up bags with snacks and water. When it's nice out, the volunteers gather in the local community garden and build the sandwiches together.

On Monday, CBS News went on a Hope Walk with Marty and some eighth graders from Immaculate Conception. Each kid grabbed a bag filled with sandwiches, cookies, water, and gloves, and walked with Marty and other volunteers to look for people who might be in need.

But we know this about them, many of them, they're all on the margins," he said. "And they all will benefit from a peanut butter and jelly sandwich, a bottle of water, a hat or a pair of gloves and a cookie. And then, we always end with a little prayer and a blessing."

Each person they encountered was gracious for the food and the prayer. Some of them recognized Marty, others were strangers.

Marty has gotten to know many people in the neighborhood, and has seen first-hand how the Hope Walks can make an impact.

He used to see a woman named Virginia on the street often. When he saw her recently, she had news. "We saw her outside and she held up a key and she goes, 'I got an apartment,'" Marty said. "We were so thrilled. We didn't help her do it, but maybe we played a small part. We're some people that at least she can share that good news with, and we definitely celebrate with her."

Caitlin O'Kane is a digital content producer covering trending stories for CBS News and its good news brand, The Uplift.

www.cbsnews.com - 10 months ago
The FBI is investigating a series of attacks on Planned Parenthood offices around the country, including arson. Weijia Jiang has the latest.
Read More

The politics of resentment and how meritocracy divides Americans

www.cbsnews.com - 1 year ago
Author and Harvard professor Michael Sandel joins CBSN to discuss the nation's polarized political landscape, and how President Trump was able to tap into the politics of resentment during the 2016 election. His new book is called “The Tyranny of Merit:
Read More

Are parents overreacting about concussion risks in children playing sports?

www.cbsnews.com - 10 months ago
Fear of concussions is leading parents to pull their children out of some athletic activities. However, doctors say inactivity may lead to more long-term health risks than a concussion. Jan Crawford reports.
Read More