Donald Trump's campaign rallies are among the nation's biggest events held in defiance of coronavirus-related crowd restrictions
Author:
Published: 2020-10-30 04:54 am 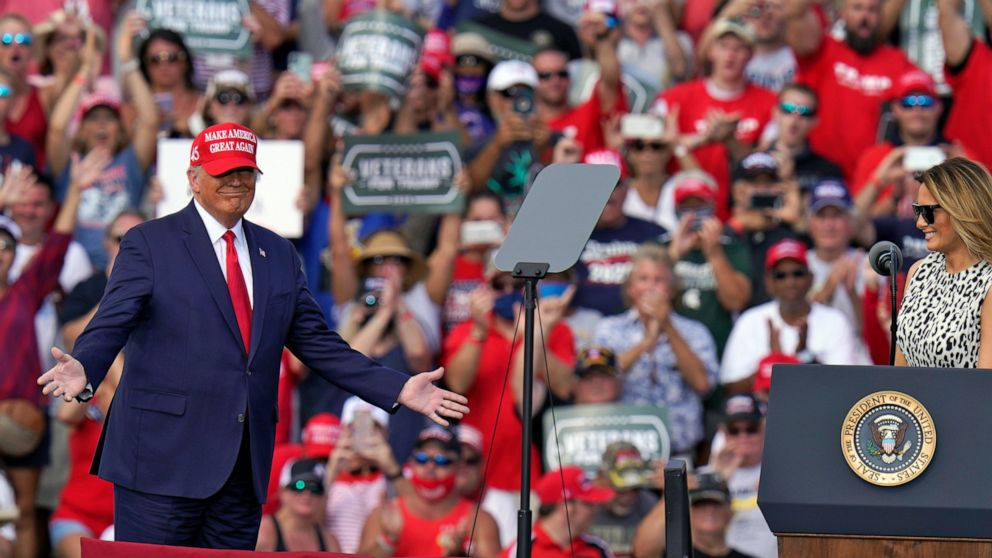 But it's a different story in Trumpland. Thousands of President Donald Trump's supporters regularly cram together at campaign rallies around the country — masks optional and social distancing frowned upon.

Trump rallies are among the nation's biggest events being held in defiance of crowd restrictions designed to stop the virus from spreading. This at a time when public health experts are advising people to think twice even about inviting many guests for Thanksgiving dinner.

“It doesn’t matter who you are or where you are, when you have congregate settings where people are crowded together and virtually no one is wearing a mask, that’s a perfect setup to have an outbreak of acquisition and transmissibility,” Dr. Anthony Fauci, the nation's top infectious disease expert, recently told Yahoo News. “It's a public health and scientific fact.”

The Trump campaign, which distributes masks and hand sanitizer at its rallies, says those who attend are peaceful protesters who, just like Black Lives Matter demonstrators, have a right to assemble. The president says he wants to get the country back to normal.

Some states have fined venues that host Trump rallies for violating caps on crowd size. But the rallies continue — even as the U.S. sees cases spike, especially in the Midwest and the Plains. The nation posted a record high number of new infections last week — nearly 500,000.

And the crowds keep turning out for Trump.

Ysabel Benejam, 69, of West Bloomfield, Michigan, drove about 90 minutes to Lansing and waited more than four hours in rainy, near-freezing temperatures to see Trump on Tuesday.

“I’m not afraid at all,” said Benejam, wearing a “Make America Great Again” hat and a mask emblazoned with “Trump 2020.” "We need to step back into normality.”

Democrat Joe Biden, in contrast, has shunned rallies and instead holds online and drive-in events where people honk their horns to show support. He calls the Trump rallies “super-spreader events” and says he's listening to the warnings of public health experts.

Since Feb. 7, when Trump told author Bob Woodward that he knew the coronavirus was airborne and deadlier than than the flu, the president has hosted more than 50 rallies in more than two dozen states. They were halted during most of March, April and May because of the pandemic. After they resumed in late June, they were held primarily outdoors at airports.

Mask use is spotty. Some people cover their mouths but not their noses. And by the end of Trump's hour-plus speeches, some masks are slung low around people's chins. The campaign makes a point to ask people sitting behind Trump — and likely to be captured on camera — to wear masks, but they don't always comply.

Pete Kingsley, 80, of Strasburg, Pennsylvania, was not wearing a mask as he approached the security line at Trump's rally Monday in Lititz. He said he believes the virus is being hyped to hurt Trump's chance of reelection and to “bash the economy — destroy it.”

Lita Ciaccio, 65, of Laurel, Maryland, was concerned about contracting the virus but showed up anyway. She arrived wearing a mask and plastic face shield and said she planned to stand on the “edges” of the crowd.

Not all locals are happy to have Trump come to town.

Zach Nayer, a resident at Riverside Regional Medical Center in Newport News, and a colleague later compiled county data on new coronavirus cases at Trump rally sites from late June to the Newport News event. They reviewed the number of cases for the 14 days before and after each event and published their findings on the health news site STAT.

They found that spikes in COVID-19 cases occurred in seven of the 14 cities and townships where rallies were held: Tulsa, Oklahoma; Phoenix; Old Forge, Pennsylvania; Bemidji and Mankato in Minnesota; and Oshkosh and Weston, Wisconsin.

The researchers acknowledged, however, that increased caseloads could not be definitely linked to the rallies.

“We’ve had a huge increase in cases in the past six to eight weeks,” said Judy Burrows, public information officer for the health department in Marathon County, which includes Weston, Wisconsin.

She said the department is far behind in processing individual cases and has not been able to do a complete job in tracing back to where people contracted the virus. A lot of people in the community are attending mass gatherings, but the health department doesn't have data suggesting that one is more to blame than another, she said.

The Trump rallies have irked Democrats in battleground states, including Christopher Gibbs, a farmer in Maplewood, Ohio, who voted for Trump in 2016 but now supports Biden.

Gibbs is president of a new group called Rural America 2020. which sponsored dozens of billboards around the country to elevate issues important to rural residents. After the president returned to the campaign trail, the group decided to repurpose the billboards and use them to warn residents about the risks of his events.

The group also had a plane tow a long banner over Omaha, Nebraska, before Tuesday's rally there. It said: “Warning! Superspreader Trump Visiting NE. Mask Up!”

In Minnesota, Democratic Gov. Tim Walz said he was “deeply disappointed” to learn that compliance with the state’s masking and social distancing guidance was poor at Vice President Mike Pence’s rally Monday in the city of Hibbing.

The Trump campaign paid $1,000 to get the rally site, according to a contract with the airport that included a provision that the rally conform to Minnesota restrictions. Hibbing police estimated the crowd at 650 — well beyond the state’s 250-person limit due to COVID-19.

The Minnesota Department of Health says 24 coronavirus cases have been reported among people who attended large Trump campaign events in the state, including 16 at a rally in Bemidji The department said four more cases were reported among anti-Trump protesters who attended the Bemidji rally.

Concerned about the spread of the coronavirus, Treworgy Family Orchards in Levant, Maine, voiced regrets this week about Trump's visit to their business on Sunday.

The orchard said it expected the president to make an unannounced visit, surprise a few people and take photos with pumpkins. Instead, word got out and hundreds of people — many without masks — showed up and lined the motorcade route to the orchard, which has a mask and social distance policy.

“We were not aware that this visit would be open to the public without our ability to enforce our policies," the orchard said. "All enforcement of the farm was handled by the Secret Service, and by the time crowds began to gather, our staff was not able to move freely.”

abcnews.go.com - 1 month ago
The death toll from mudslides in eastern Indonesia has risen to 119 with scores still missing as rain continued to pound the region and hamper the search
Read More

abcnews.go.com - 4 months ago
A Kentucky family is mourning the loss of three members to COVID-19 in four weeks.
Read More

abcnews.go.com - 8 months ago
A Michigan school district accused of failing to stop a teenager from being bullied has settled a lawsuit over his suicide for $500,000
Read More