Clawing their way out of a two-goal hole they fell into after the first period, the Rangers stormed back with three unanswered goals through the final two frames to secure a telling 6-3 victory.
Author: Mollie Walker
Published: 2022-01-19 10:29 pm 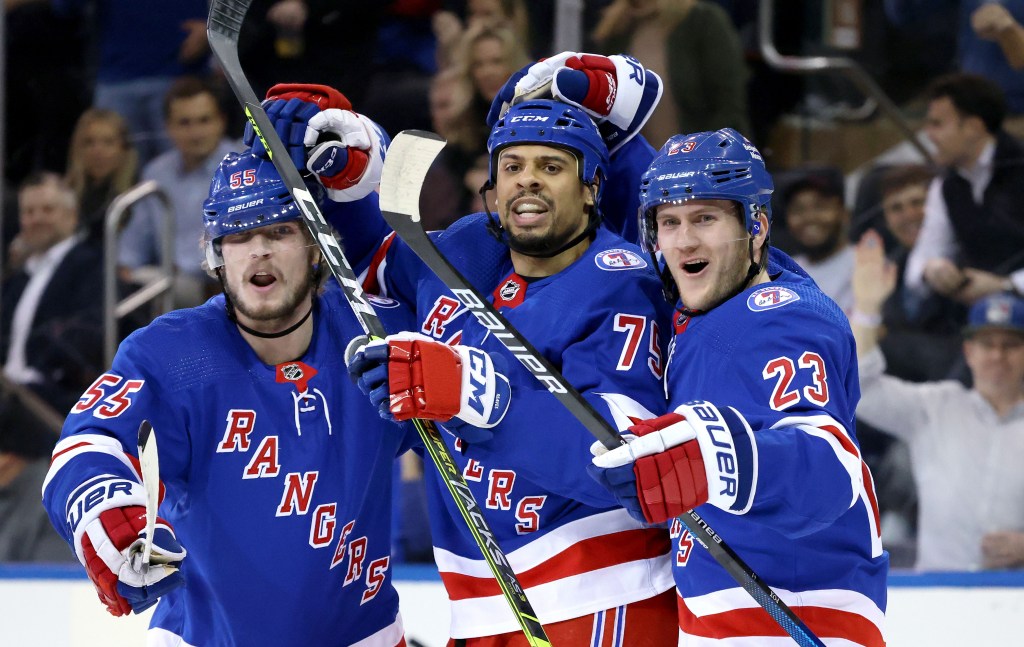 The resilient Rangers march on.

Clawing their way out of a two-goal hole they fell into after the first period, the Rangers stormed back with five unanswered goals through the final two frames to secure a telling 6-3 victory over the Maple Leafs Wednesday night at Madison Square Garden.

The win was the Rangers’ third in a row as they prepare for the ultimate litmus test in the Hurricanes on Friday.

Ryan Reaves scored his first and second goal as a Ranger, while Adam Fox led the team with two goals and an assist for a three-point effort. Goalie Igor Shesterkin turned aside 35 of the 38 shots he faced to improve to 18-4-2 on the season.

Resiliency has been a trademark of this Rangers team in recent weeks, having just emerged from their first notable COVID-19 outbreak that sidelined several players game-to-game. And with the game tied 3-3 entering the third period on Wednesday, the Rangers tapped into their new-found resilient nature, buckled down and played to win.

Ryan Strome pulled the Rangers ahead at 10:50, burying a feed from Ryan Lindgren for the 4-3 lead. Less than five minutes later, Chris Kreider net his 25th goal of the season to put the game out of reach. Fox’s empty-netter then sealed the deal.

After falling behind 3-1 in the first period, in which they were too careless with the puck, the Rangers managed to tighten up their game in the middle frame. Sparked by Reaves’ second goal of the night at 2:58 to make it a one-goal game, the Blueshirts rediscovered their forecheck and exposed some weak points in the Maple Leafs’ structure.

With just over two minutes left in the second, a stellar passing sequence from the Rangers ended with Fox knotting the game 3-3.

Auston Matthews nearly scored toward the end of the third period to tie the NHL’s consecutive goal-scoring record in road games, but referees ruled he kicked it in and overturned the goal.

The Rangers were straight-up outplayed through the opening 20 minutes. It took Toronto just 3 ½ minutes to put up two goals, with the first one coming on a backhander from winger Ilya Mikheyev after Ryan Lindgren failed to clear the puck.

Mitch Marner doubled the Maple Leafs’ score on the power play less than a minute later, netting his first goal on the man-advantage in nearly two years after Kreider was called for tripping in Toronto’s zone.

The Rangers finally answered later in the period, when Greg McKegg won a puck battle in the corner before dishing it to Reaves, who was all alone in front to cut the deficit to 2-1. Fox also earned an assist on the goal, making him the first Rangers defenseman to reach the 40-point mark in 40 games or fewer since Brian Leetch during the 2000-01 season.

At that point, head coach Gerard Gallant began shuffling the lines in attempt to spark his team. Bumping Artemi Panarin up to the top unit with Mika Zibanejad and Chris Kreider, Gallant loaded up the top of the lineup. That combination was on the ice, however, when Toronto winger Michael Bunting capitalized on an odd-man rush at 17:50 of the first.

nypost.com - 4 months ago
Is this Julius Randle’s big audition to be part of “All the Kings’ Men”? And De’Aaron Fox’s Garden tryout?
Read More

nypost.com - 11 months ago
The Food and Drug Administration gave the green light to a controversial new Alzheimer’s drug -- despite objections from some of its own experts, according to internal memos.
Read More