Nets finally getting contributions from their centers

It seems as if Nets coach Steve Nash spent the first half of the season shuffling and reshuffling the center position without ever finding what he wanted. But lately — especially on the team’s current four-game trip — it has come up aces.
Author: Brian Lewis
Published: 2022-01-23 03:10 am 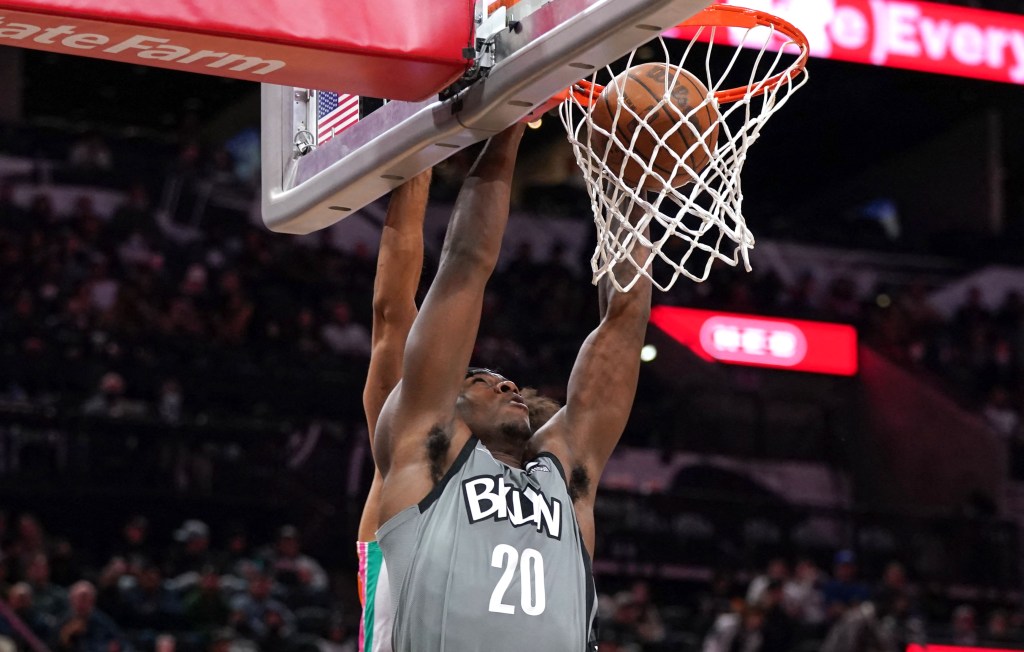 MINNEAPOLIS — It seems as if Nets coach Steve Nash spent the first half of the season shuffling and reshuffling the center position without ever finding what he wanted. But lately — especially on the team’s current four-game trip — it has come up aces.

Rookie Day’Ron Sharpe started and had six points and 10 rebounds Friday in a 117-102 win at San Antonio. Veteran LaMarcus Aldridge came off the bench to contribute 16 points and seven boards.

“Yeah, I think we’re starting to build some chemistry playing with Kyrie [Irving] and James [Harden],” Aldridge said. “And I think as we play more and more that should get better.

The third Aldridge referred to is Blake Griffin. With Nic Claxton still sidelined, Griffin chipped in 10 points and five rebounds Friday, finishing a plus-six in 11:25.

“We kind of know that’s a scenario that could happen. I wanted to get [Griffin] a chance,” Nash said. “He didn’t really get a chance last outing so he came in. I thought he did a great job. I thought [Sharpe] did some great things, got 10 rebounds and was a good screener-and-roller. Looked a little bit tired at times and then [Aldridge] was super-solid making shots and a big night for him coming back.”

Sharpe and Aldridge combined for 41 points on 16-for-21 shooting Wednesday in the 119-118 win over the Wizards. They combined to go 9-for-9 from the free-throw line, grab 12 rebounds, hand out five assists and block three shots. They also did not commit a single turnover in 48 combined minutes.

Adding Griffin to the mix Friday against the Spurs, the trio combined for 32 points on 15-for-28 shooting with 22 rebounds and finished a plus-15.

It helped that the foul-prone Sharpe — who had averaged more than 4.3 fouls in his prior six games — committed just one against the Spurs.

“Man, I try to talk to him but it’s just …” Aldridge said with a laugh of his overzealous rookie protégé. “But he plays hard, so I think that’s part of growing as a big is to learn to play hard and not foul.”

The Nets could be adding another young big to the mix. The G-League Long Island Nets acquired 24-year-old Thon Maker via the available player pool.

The 7-foot, 240-pounder had played eight games with the Cavaliers in 2020-21, and had most recently been playing in Israel.

Claxton (left hamstring tightness) is questionable for the game Sunday.

nypost.com - 11 months ago
The 31-year-old victim was on Boston Road near Provost Avenue in Eastchester around 2:20 a.m. when he said he heard shots and felt pain, according to authorities.
Read More

nypost.com - 1 year ago
Cryptocurrency firm Ripple says it expects to be sued by the Securities and Exchange Commission — and it pledged to fight the case tooth and nail. The San Francisco-based company said it’s prepared to go toe-to-toe with US regulators over its XRP
Read More

nypost.com - 1 year ago
It may be time to start dreaming bigger than the NIT. It may be time for St. John’s and its fans to think about more than just finishing this season strong. Mike Anderson and the Johnnies are fast becoming one of the hottest teams in the country. They are
Read More

The 38 best advent calendars for adults and kids: wine, chocolate and more

nypost.com - 7 months ago
Get your hands on an epic advent calendar before it's too late!
Read More
More News & Articles