Mayor Eric Adams vowed "to roll out a real plan'' this week to try to curb Big Apple gun violence after Friday's shooting that left a cop dead and another fighting for his life.
Author: Sam Raskin
Published: 2022-01-23 12:33 pm 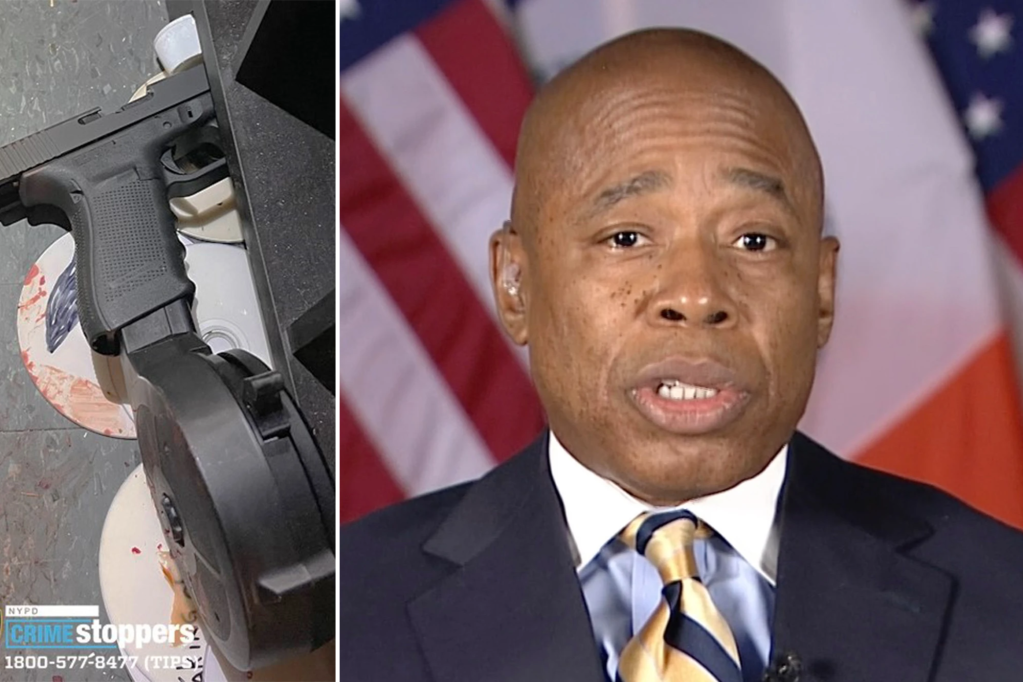 Mayor Eric Adams vowed Sunday “to roll out a real plan” this week to try to curb Big Apple gun violence after Friday’s shooting that left an NYPD rookie cop dead and another officer fighting for his life.

“This is a sea of crime that’s being fed by many rivers, and we need to dam each one of those rivers, and we have been unsuccessful [in doing] so throughout the years” said the mayor, a former NYPD captain, on CNN’s “State of the Union.”

“These crimes did not start during my administration, they have been here for far too long, in many parts of our community,” he said.

“I’m going to roll out a real plan this week when I speak to the New York public, and we’re going to go after the underlying reasons you’re seeing crime in our city.”

Adams — who has partly blamed the federal government for the flow of guns into the Big Apple — mentioned two initiatives that he has already talked about.

He said Sunday that his broad plan will include the formation of a plainclothes anti-gun unit to replace the controversial anti-crime unit that former Police Commissioner Dermot Shea disbanded last year.

“We’re going to roll out a smart way of policing, put in place again a modified version of a plainclothes anti-gun unit that’s going to go after those known shooters and people who are actually creating the devastation in our city,” he said Sunday morning on ABC.

The new units, to be called “Neighborhood Safety Teams,” will replace the uniformed Public Safety Teams in areas where shootings surged last year, according to a memo Chief of Department Ken Corey sent out earlier this month.

Adams said the plan will also include enhanced police presence in the subway system — a measure he and Gov. Kathy Hochul announced Jan. 6.

Adams first made mention of his wider plan Saturday during a gun-violence roundtable in The Bronx.

“We are going to lay out the blueprint for safety and show how we got here,” said Adams, according to ABC 7.

The mayor’s comments come fewer than two days after NYPD rookie Jason Rivera, 22, was shot dead and his partner, Wilbert Mora, 27, left in grave condition from Friday’s gun-down in Harlem. The pair were attacked while responding to a domestic-disturbance call involving a mother and her son, alleged shooter Lashawn McNeil.

McNeil, a 47-year-old convicted felon, used a Glock .45 with an illegal high-capacity ammunition magazine that was stolen from Baltimore in 2017, according to NYPD Chief of Detectives James Essig.

Other recent high-profile, disturbing crimes in the five boroughs involved a baby girl being shot in the face and a mentally ill man killing a woman by shoving her in front of an oncoming subway train.

Since Adams was sworn in Jan. 1, five NYPD officers have been shot, including four last week. On Thursday, Detective Dominick Libretti was hit with gunfire during a drug bust on Staten Island.

And Tuesday, Officer Kaseem Pennant was shot in the leg while struggling with a teenage suspect in The Bronx.

Kevin Knox could be answer for slumping Knicks

nypost.com - 1 year ago
For the first 10 games this season, Knicks coach Tom Thibodeau kept the same starting lineup intact, a testament to his belief in the quintet and the group’s ability to avoid injuries. It is believed the Knicks haven’t had the same starters for the first
Read More

nypost.com - 3 months ago
The Issue: A report on the Clinton campaign’s involvement in spying on former President Donald Trump. The Post editorial on the alleged criminal acts committed by Hillary Clinton and her cohorts, the Justice Department and the FBI during the 2016 campaign
Read More

nypost.com - 6 months ago
The child-care proposal that House Democrats have written into Biden’s Build Back Better “human infrastructure” bill may be the worst feature of the nearly $2 trillion legislation.
Read More

nypost.com - 3 days ago
After advancing past a brutally competitive series against the Capitals, the Panthers face more stiff opposition in the Tampa Bay Lightning.
Read More
More News & Articles