Whenever they decide to make it official, the decision should be simple for the Giants. There’s no reason to complicate it. Their man will be right there in front of them on Tuesday.
Author: Mark Cannizzaro
Published: 2022-01-24 08:34 pm 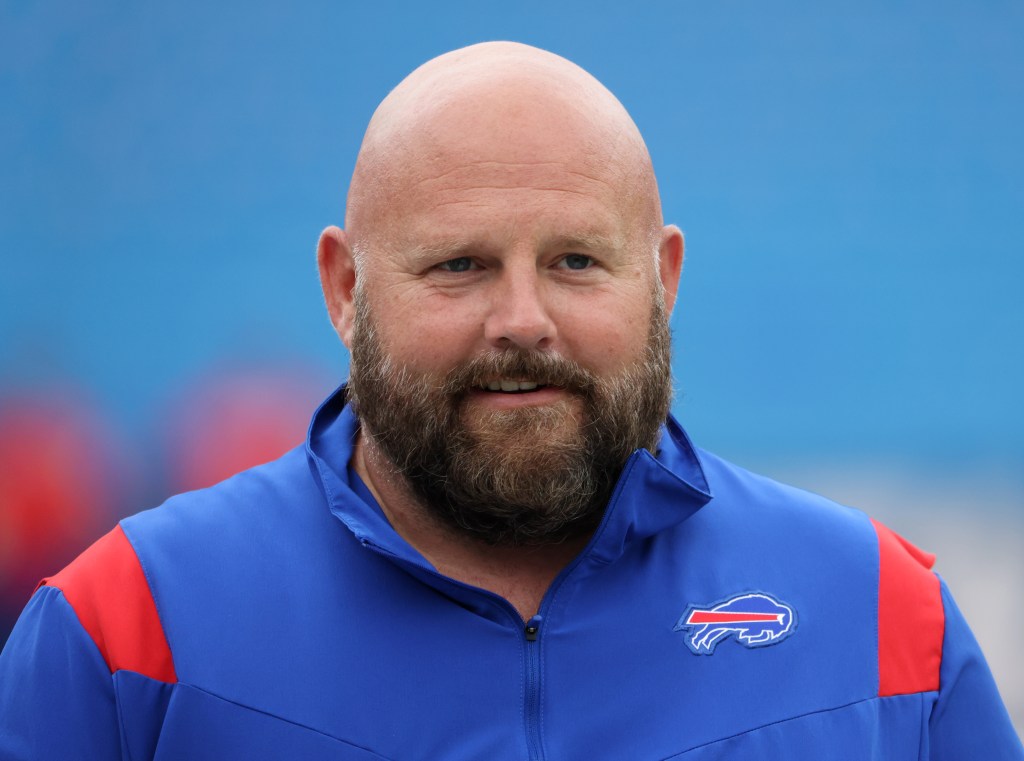 The first finalist for the Giants vacant head-coaching job will interview in person with team owners and the new general manager on Tuesday in New Jersey.

This is where the search should end, because Brian Daboll is their man.

Just as they did in their search for a new general manager before hiring Joe Schoen, the Giants are casting a wide net on their coaching search, which is good business and the responsible thing to do.

Daboll, who’s fresh off Sunday night’s wild overtime AFC divisional playoff loss to the Chiefs in which his Bills offense was prolific, will be the first candidate to interview a second time.

Hopefully — presumably? — the Giants already have a strong feeling about hiring Daboll, just as they did after they spoke to Schoen, the former Bills assistant general manager, for the first time, virtually, before bringing him in for an in-person meeting.

Hopefully for the sake of Giants fans desperate to distance themselves from the 22-59 malaise of the past five years, Tuesday’s meeting is merely a confirmation session for Mara, Tisch and Schoen before they offer Daboll the job.

The fact that Daboll is the only candidate from the offensive side of the ball among those being interviewed so far might be somewhat telling.

The Giants’ biggest issues are on offense, considering they’ve ranked 31st in the NFL in points scored in each of the past two seasons, and a head coach with an offensive background is the best fit.

Hiring Daboll would leave him with some attractive possibilities to bring in as his defensive coordinator with the likes of Vic Fangio (late of the Broncos), Don “Wink’’ Martindale (Ravens), Mike Zimmer (Vikings) and even current coordinator Patrick Graham from which to choose.

Any of those coordinators would have to be considered a potentially good fit for Daboll because of their experience, particularly Fangio and Zimmer, who’ve been head coaches as recently as this past season.

The only knock on Daboll is the fact that he’s never been a head coach, but he’s someone who’s paid his dues, accumulating a vast amount of experience in 21 years as an NFL assistant in a lot of different key roles as a position coach and a coordinator.

Daboll adding NFL experience to his staff on the defensive side of the ball will make the Giants immediately stronger and make him a better head coach.

Daboll, even though his role as head coach needs to be more of a CEO overseer of the entire operation, cannot help but make the struggling Giants offense better — particularly quarterback Daniel Jones, who’s had two head coaches and three offensive coordinators in his three uneven, injury-riddled seasons.

If Daboll can turn Jones into two-thirds of the dynamic pass-run threat that he’s helped Josh Allen develop into in Buffalo, they might name a street after him around the Meadowlands.

Daboll has to be credited for helping Allen grow from a raw, inaccurate passer with poor ball-protection habits into one of the most accurate passers in the league and the player who came within 13 seconds of dethroning Patrick Mahomes and the Chiefs on Sunday night.

It’s tantalizing to think what Daboll might be able do for Jones and the Giants’ offense.

Pairing up a general manager and head coach with a shared vision can be a powerful force in the NFL. Daboll has worked with Schoen for the past four years on Buffalo as Schoen helped build the roster with talent and Daboll helped utilize that talent on the field.

The dovetail affect in the NFL with general manager and head coach is the best chance at a winning formula.

Daboll has a diverse background, having worked for Bill Belichick in New England, Nick Saban at Alabama and most recently Sean McDermott in Buffalo, among many others.

He’s well-rounded, humble and egoless. These are inherently endearing qualities that make him a head coach whose players will respect him and play hard for him.

Whenever they decide to make it official, the decision should be simple for the Giants. There’s no reason to complicate it. Their man will be right there in front of them on Tuesday.

nypost.com - 7 months ago
Dramatic bodycam footage released by the Seattle Police Department showed officers rescuing the man after he crashed into a tree and obliterated his car in Madison Valley.
Read More

nypost.com - 3 months ago
The NFL has suspended all aspects of its COVID-19 protocols, citing recent trends showing that the spread of the coronavirus is declining.
Read More

nypost.com - 7 months ago
On Wednesday, acting chair of the CFTC Rostin Behnam argued with the Senate Agriculture Committee that the CFTC should have jurisdiction over the $2 trillion cryptocurrency market.
Read More

nypost.com - 1 month ago
Prosecutors said he was involved in the deaths of journalists James Foley and Steven Sotloff, as well as aid workers Kayla Mueller and Peter Kassig. ​
Read More
More News & Articles