James Harden keeps finding his name circulating in trade rumors — or the same rumor repeated over and over — as part of a sign-and-trade for disgruntled Philadelphia guard Ben Simmons.
Author: Brian Lewis
Published: 2022-01-24 08:34 pm 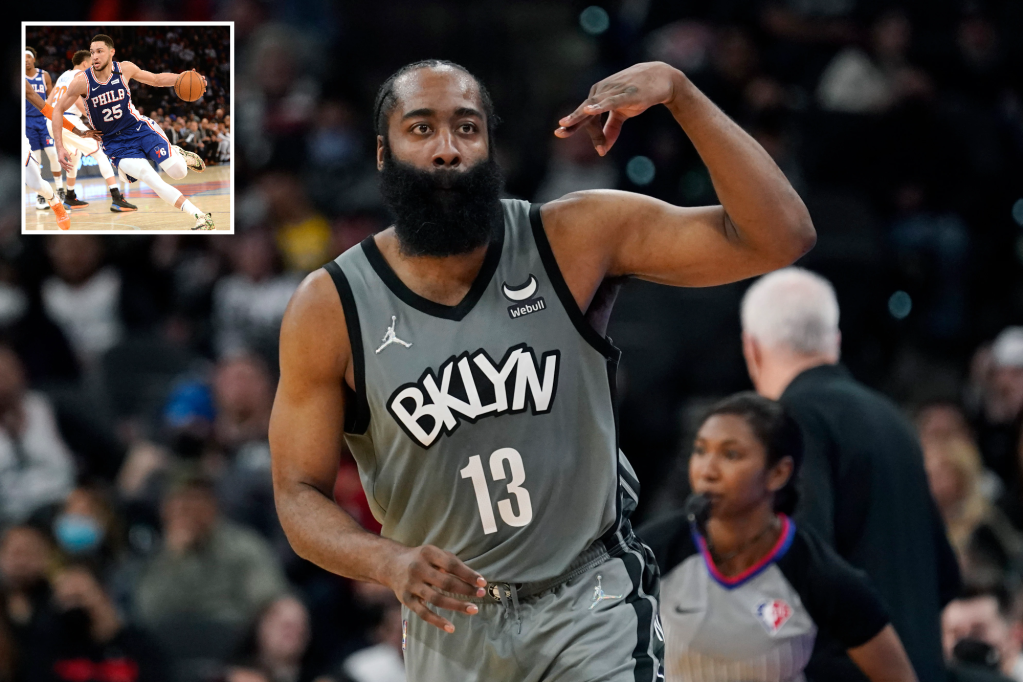 James Harden keeps finding his name circulating in trade rumors — or the same rumor repeated over and over — as part of a sign-and-trade for disgruntled Philadelphia guard Ben Simmons.

The undeniable part is that Daryl Morey, the 76ers president of basketball operations, remains a staunch Harden supporter. He brought Harden to Houston, built the team around him and — upon moving to Philadelphia — tried to trade for him last season. But Harden wanted to join the Nets, and Rockets owner Tilman Fertitta preferred Brooklyn’s cost-effective draft-pick-heavy offer.

Outlets from The Athletic to ESPN and the Philadelphia Inquirer have all cast doubt on a potential deal at the trade deadline for Simmons. And there’s no indication that Harden wants out of Brooklyn, and such a sign-and-trade would be a Herculean task in terms of degree of difficulty for general manager Sean Marks.

Nets rookie Kessler Edwards has been a pleasant surprise, outperforming his No. 44 draft slot by a considerable margin.

“Just being really fun, long journey, full of surprises. Didn’t really know what to expect. I’m finally starting to get into a rhythm, knowing what to do, what’s going to happen. Stuff like that,” Edwards said. “I knew it’d be tough considering the talent we have, but I knew with my skill set and how I play I’d find a way to contribute. That’s really just what I’m trying to do now.”

The swingman — a “3-and-D” specialist — has started the past seven straight games, coming off a 15-point, five-rebound performance in Minnesota. He shot 3-for-7 from behind the arc, and has provided length and disruptive defense.

“Kess has been unbelievable. His defense has been special for us in this stretch of games and he’s also been great offensively knocking down shots. But the best part about him is he doesn’t really hunt shots. He just goes to the corner if he gets the shots, he does. If he doesn’t, he doesn’t,” said Blake Griffin, adding, “[His] poise for a rookie is special.”

Edwards’ emergence — logging 32 and 29 minutes respectively in the past two games — has cut into the playing time of wing DeAndre’ Bembry, who has gotten just 24 minutes combined the two contests.

“A little bit of that and also Kessler’s played great. Kessler’s been outstanding for us and it cuts down the minutes in that defensive player and we have a bunch of them,” coach Steve Nash said. “He’s taking the bulk of the minutes right now and I think he’s earned it.”

Lakers All-Star Anthony Davis has been upgraded to probable for Tuesday, after having missed 17 straight. He hasn’t played since Dec. 17 at Minnesota.

nypost.com - 1 year ago
An 18-year-old woman was hit in the face with a bottle during a dispute on the subway in Brooklyn on Wednesday night, police said. The victim was struck during a verbal argument with a man on an N train at the 36th Street station in Sunset Park at about
Read More

nypost.com - 9 months ago
A classic, "Simpsons"-inspired prank was successfully pulled-off in a hilarious moment that no one on Virginia's Henrico School Board realized was going down.
Read More

nypost.com - 1 year ago
CIVITA DI BAGNOREGIO, Italy – Calling yourself “The Dying Town” may not sound like the best way of attracting visitors, but Civita has learned to make a living out of dying. And it has resisted definitive death for so long that Italy has nominated it and
Read More
More News & Articles