Surgeon General on how U.S. can "get to a better place" with COVID 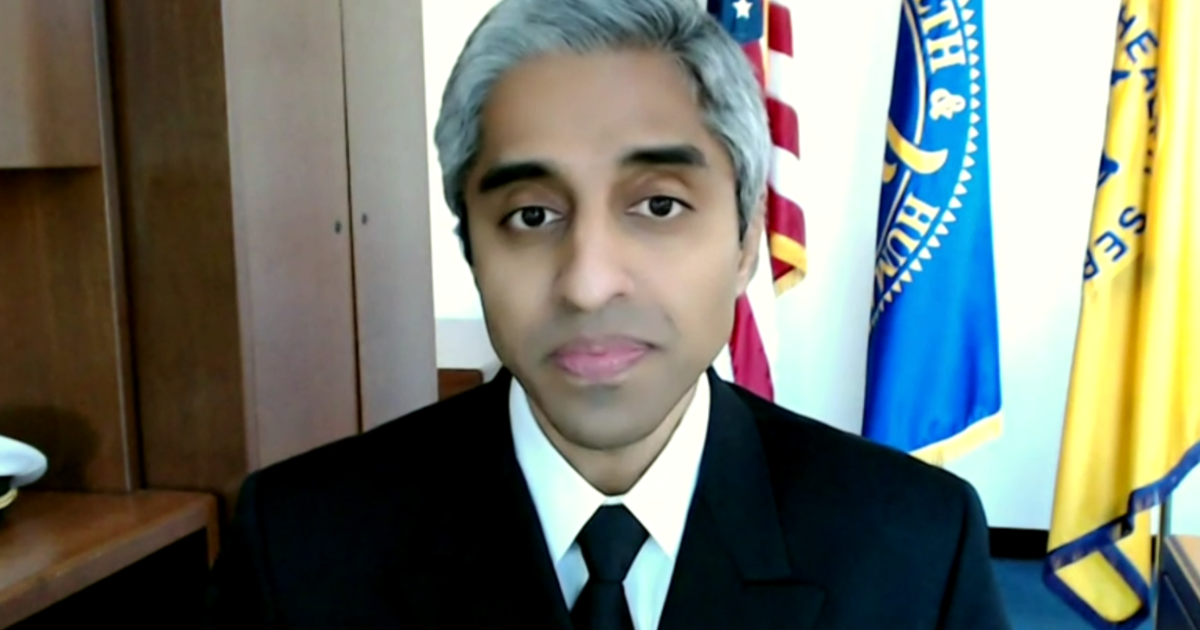 Although the nation is starting to see a decline from the recent peak of COVID-19 cases, Surgeon General Vivek Murthy said the United States still has a ways to go in defeating the pandemic.

"While we are heading in the right direction, we are not where we want to be," Dr. Murthy told CBS News' Tanya Rivero and Nikki Battiste on Thursday.

He urged Americans to continue taking precautions against the virus — getting fully vaccinated, wearing high-quality face masks and getting tested — so that the country can "ultimately get to a better place."

"If we do this together we will get through this surge and see a better day," Murthy said.

He noted that the U.S. is still reporting nearly 2,000 COVID-related deaths each day, and some of the highest numbers of COVID hospitalizations seen during the entire pandemic. But over the last seven days, there has been a 5% decrease in new U.S. cases on average when compared to the week prior, the Centers for Disease Control and Prevention reports.

As the Omicron surge shows signs of starting to decline, Murthy said scientists around the world continue tracking variants of the virus. Scientists have recently identified a new sub-variant of Omicron called BA.2, which has been detected in at least 40 countries, including the United States.

Murthy called BA.2 "a cousin" of Omicron, and said there isn't evidence yet which suggests it to be more dangerous or less responsive to existing vaccines. He said cases of BA.2 are currently "very low" in the U.S., but added that scientists are keeping their eyes on it.

"We want to learn everything we can about this to be prepared," Murthy said. "For now, though, the message is still the same and the steps we need to take are still the same."

He encouraged Americans not to wait to get vaccinated. While pharmaceutical companies are working on developing variant-specific vaccines, Murthy said the existing vaccines are already "effective at protecting people from the worst outcome of Omicron, which is hospitalization and death."

Murthy also defended the Food and Drug Administration's recent decision to halt use of two monoclonal antibody treatments that aren't effective against the Omicron variant, despite criticism of the decision.

"What we have seen now clearly in the laboratory data is that the two therapeutics in question, which are both two monoclonal antibodies, that these do not actually appear to work when it comes to Omicron," he said. "And that's very important here."

He said the continued use of the treatments would be a "waste of resources" that would "subject patients to unnecessary risk."

Two years into dealing with COVID-19, Murthy said the pandemic "has taken a real toll" on Americans' mental health. He also said the country has a "moral responsibility" to look after the mental health of health care providers who have done so much to help others.

"That means investing in expanded access to mental health treatment. It means reducing the burden on many clinicians, which is in part, reducing the number of COVID cases," he said. "That means everyone taking the precautions they're taking."

17 million salmon will be released into S.F. bay in bid to save species

www.cbsnews.com - 1 year ago
A test flight of the SpaceX Mars rocket ended in a fiery explosion in Texas on Wednesday.
Read More

www.cbsnews.com - 1 year ago
"Where to get covid vaccine" was the most Googled question across the U.S. over the past month. CBSN technology reporter Dan Patterson joins CBSN's Lana Zak to discuss the overwhelming interest in the vaccine among Americans.
Read More
More News & Articles