America Picks Its President as it Faces Joblessness, Coronavirus and Anxiety 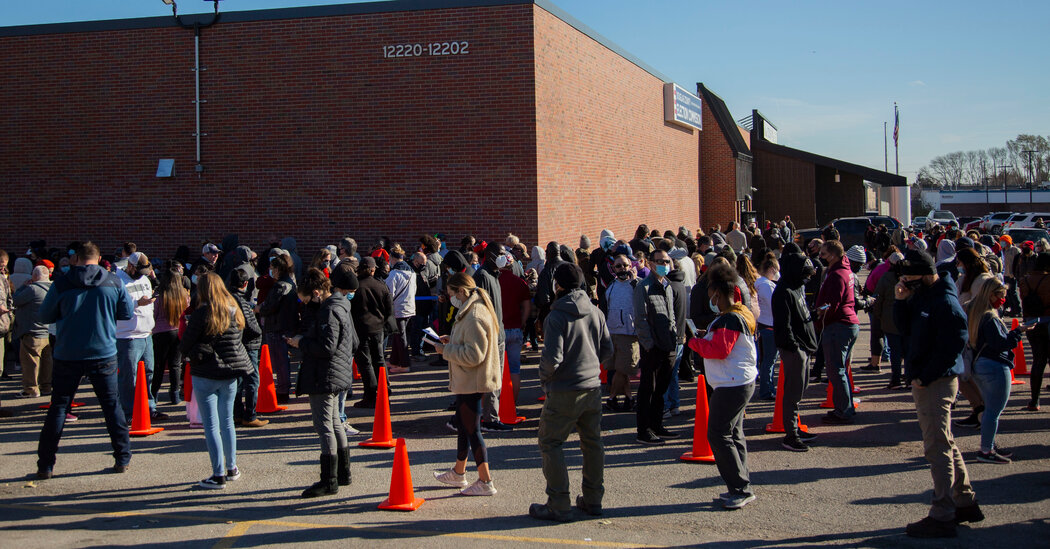 OMAHA — A nation with nearly 8 percent unemployment and mourning more than 231,000 Covid deaths, where four out of five Americans say they feel nervous about the country’s future, gets a final chance Tuesday to decide which candidate is best equipped to lead it past those daunting numbers.

The division and anxiety are evident in conversations among voters in long lines outside early voting places and across browning autumn lawns where warring yard signs pit neighbor against neighbor. Here in the middle of the country, where case counts are surging and college football games were postponed after much angst this past weekend, the worry is all connected, from people on either side of the political chasm.

The coronavirus trends are especially pronounced in several battleground states, including Wisconsin and Michigan, which Joseph R. Biden Jr. is fighting to win back for the Democrats after President Trump’s victories there in 2016, and where infection rates were ticking up as the calendar wound down.

A fundamental unease about the country hovers over most other concerns voters describe as they cast ballots: The future of America troubles them more than whether they may lose a job in this recession, whether they could become ill in this pandemic, whether they could personally be harmed by violent crime.

In national polling by The New York Times and Siena College, voters across the political spectrum say they worry that the next generation of Americans will be worse off. And they are concerned America could lose its democracy.

That sentiment means different things to voters on the left and the right. Republicans describe fears of creeping socialism from within the Democratic Party and deep changes in American values amid protests against the police and historical figures. Democrats fear threats to democracy from within the White House itself, as they describe Mr. Trump undermining the country’s institutions and rule of law.

Other opinion polling leading up to the election has shown Americans deeply divided not just on which candidate they support in the election, but also on questions that have become inseparable from partisan politics this year.

Voters in the two parties disagree on the outlook for the economy, the importance of wearing masks and even whether schools should reopen in person.

They even see different realities in their personal lives: Just one in five Democrats said they were personally better off than four years ago, in a recent Times/Siena national poll. Nearly nine in ten Republicans said they were better off at the end of the first Trump administration.

Heading into Election Day in 2016, the presidential candidates — and the country — were facing an economy that was pointed upward. There had been 79 months of uninterrupted private-sector job gains, the unemployment rate was running below 5 percent for the first time since the start of the Great Recession, wages were growing and there were high levels of consumer confidence.

There has been progress since the spring, when the spreading pandemic shut down the economy and virtually halted commerce. But the improvements, fueled in part by $2.2 trillion in government assistance to individuals and businesses, are fading. Hundreds of thousands of new jobless claims are reported every week at levels that still eclipse previous records.

Several major companies have said they expect another wave of layoffs and furloughs. Wall Street analysts warn that growth is likely to continue to slow, leaving the economy about 2.5 percent smaller than it was last year.

In several battleground states, including Pennsylvania (8.1 percent), Texas (8.3 percent), Ohio (8.4 percent), Michigan (8.5 percent) and Nevada (12.6 percent), the jobless rate is higher than the national average. Others are faring better, with Wisconsin at 5.4 percent, Georgia at 6.4 percent and North Carolina at 7.3 percent. All, though, are in much worse shape than they were a year ago.

Through most of the Trump administration, views of the economy closely tracked political preferences. Republicans could be counted on to have optimistic views about the economy and give President Trump the credit, while Democrats had a much more negative outlook on the country’s prospects and Mr. Trump’s effect on them.

“People’s views of the economy are always colored by party identification,” said Lynn Vavreck, a political scientist at the University of California, Los Angeles.

Republicans remain more positive than Democrats, but overall confidence in the economy is low, according to Gallup polls from mid-October, and only 28 percent of those surveyed approved of the way things were going in the United States.

But, she added, “there is a robust relationship between the actual economy and election outcomes.”

In Nebraska, the jobless rate in September was 3.5 percent, not that far off its rate last September and the lowest in the country. Many supporters of the president here tout the nation’s economy over all as one reason they plan to vote for him. They blame economic woes on the pandemic, which they think was outside his control.

“Trump has improved the economy and once they get a vaccine, I’m sure the economy will go back up again,” said Eli Duberow, 42, from Lincoln, as he was waiting for Mr. Trump’s rally in Omaha to start last week.

On top of economic and election worries, America is facing a pandemic with a growing number of victims; 9.3 million Americans have been infected.

Nebraska, which splits its Electoral College votes and has been a focal point for Mr. Trump, has averaged more than 1,100 coronavirus cases per day over the last week, the most of any point in the pandemic.

That, rather than the pandemic’s economic toll, is more present in the minds of some Nebraska voters — along with, for Republicans, the creep of socialism, and for Democrats, improvements to health care.

In the state’s Second Congressional District race in Omaha’s metropolitan area, the Democratic candidate, Kara Eastman, is being painted by her opponent as a radical socialist. Her Republican rival, Don Bacon, whom she has framed as heartless for not supporting Covid relief funds, had planned for an in-person election night hotel party, but switched it to a scaled-back event for staff and family as new coronavirus cases surged.

Across the country, the virus outlook is bleak and getting bleaker. Infection numbers are trending upward in 41 states, and more than 20 states have set weekly case records in recent days. The nation has averaged more than 82,000 cases per day over the last week, the most yet. Deaths, which tend to lag cases, have climbed more slowly to about 800 daily, still well below the spring peak.

Much of the recent increase has been driven by explosive growth in the same Northern battleground states that could decide the presidential race.

The situation is especially dire in Wisconsin and Iowa, which are third and fifth nationally in recent cases per capita. Ten of the country’s 17 metro areas with the highest rates of new cases over the past two weeks are in Wisconsin. More than 14,000 cases were announced in Iowa in the seven-day period ending Sunday, the most in any weeklong stretch of the pandemic.

In the Southern battlegrounds, the picture is somewhat more encouraging, though still not good. Cases are rising in Arizona, Florida and Texas, but so far remain below the peak levels seen this summer. In Georgia, which has also improved since summer, reports of new infections have leveled off in recent days. But in North Carolina, new cases and deaths are still emerging near record levels.

Worries about voter fraud, disinformation, misinformation, possible violence and disruptions to ballot casting are also troubling many Americans. But in Omaha the recent culprit of a more than hourlong halt to early voting at the Douglas County Elections Commission was less nefarious: a squirrel had chewed through electric equipment.

www.nytimes.com - 1 year ago
The comedian and podcaster reflects on his relationship with the filmmaker and TV director who died unexpectedly in May.
Read More

For Biden to Save Semiconductors, He Can’t Follow in South Korea’s Footsteps

www.nytimes.com - 6 months ago
The lesson for the U.S. lawmakers and regulators should not be to further bolster its corporate giants in a moment of crisis.
Read More

www.nytimes.com - 3 months ago
Will horse racing right itself so people can visit Saratoga Springs for another century or two?
Read More

Was Occupy Wall Street the ‘Beginning of the Beginning’?

www.nytimes.com - 2 months ago
In “Generation Occupy,” Michael Levitin argues that the 2011 protest against income inequality shaped both the substance and style of American politics.
Read More
More News & Articles