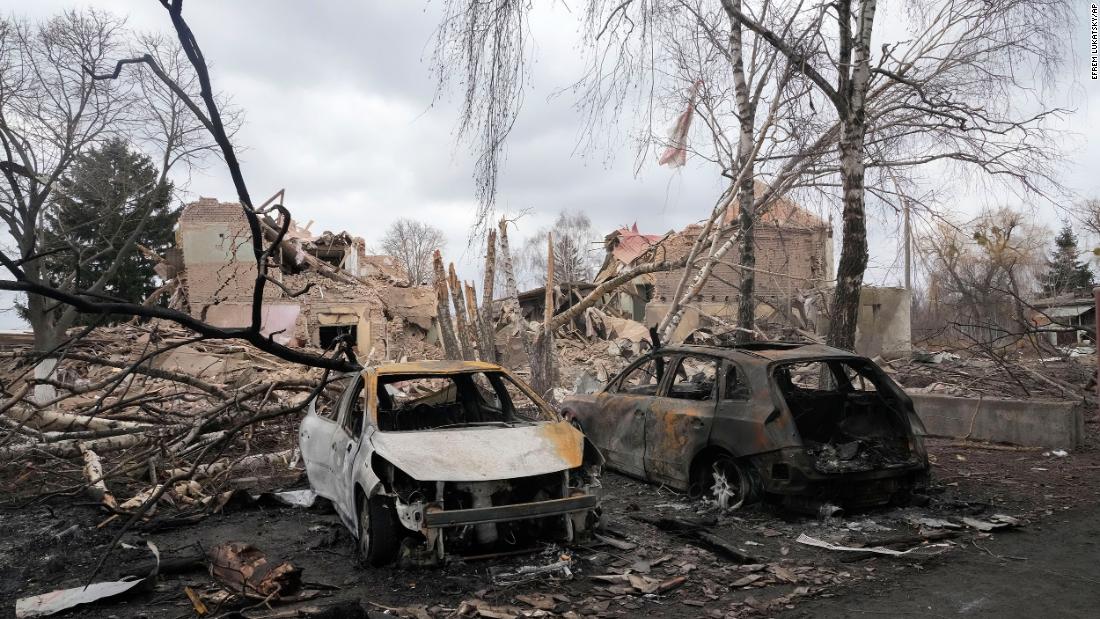 Russia has begun firing on the besieged city of Mariupol from the Sea of Azov, a senior US defense official said, as a Ukrainian counteroffensive appears to be pushing back Russian forces from around the capital, Kyiv.

Here are the latest developments in the war:

"I would like to repeat this again to all Russian pilots, they are not thinking about the orders they are fulfilling. Because killing civilians is a crime. And you will be responsible for this whether it is today or tomorrow, this is inevitable," he said during an address posted to the Ukrainian government’s Facebook page.
"Especially we are talking about a bomber plane over Mariupol, and that will happen to everyone who is killing our civilians, in our peaceful land," he said.

Without offering evidence, Zelensky claimed that Ukrainian Armed Forces took down a Russian plane near Chornobaivka, in Kherson.

Ukrainian forces have been trying in the last few days to regain territory from the Russians, according to a senior US defense official, who described them as “able and willing” to do so.

Here's the situation on the ground:

Counterattacks near the capital: A Ukrainian counterattack north and west of Kyiv appeared to have made some headway, jeopardizing Russian efforts to encircle the capital and threatening the ability of Russian forces to resupply the forward units that are exposed to the north of the city.

Makariv: One such area is Makariv, a strategic town 30 miles (48 kilometers) west of Kyiv. After days of fighting, Ukrainian forces regained control of the town, the Armed Forces of Ukraine said in a Facebook post Tuesday. CNN could not confirm the claim. Makariv had sustained significant damage from ongoing Russian airstrikes, with video showing widespread devastation. If Ukrainian forces consolidate their control of Makariv, it would become more difficult for Russian forces to secure the western approaches to Kyiv and then push further south.

North of Kyiv: There are also indications that Russian forces have suffered setbacks to the north of Kyiv in areas they have held almost since the beginning of the invasion. A brief video geolocated by CNN showed Ukrainian troops walking in the town of Moschun, about 20 miles (35 kilometers) north of the capital. Ukrainian drone video geolocated during the weekend showed the destruction of Russian armor in the same area.

Flooding of Irpin River: Satellite images from Monday showed growing flooding from the Irpin River. CNN previously reported that a dam along the Dnieper River was flooding the Irpin River basin and its tributaries. The river is critical to the Russian advance toward Kyiv; if the Russians cannot cross it, they can't take Kyiv from the west. It's unclear how the dam began flooding: whether the gates were opened on purpose by the Ukrainians, or it was hit by a military strike.

Borodyanka: Some 12 miles (20 kilometers) north of Makariv is the town of Borodyanka, which has been held by Russian and Chechen forces since early in the campaign. If the Ukrainians were to take Borodyanka, forward Russian units could be cut off. The battlefield is fluid, and the Russians could reverse recent losses. But if the Ukrainians hold Makariv and extend their control over the area, Russian positions between the town and Kyiv would become vulnerable, further impeding their goal of pushing south beyond the main east-west highway to encircle the capital.

Kherson and Mykolaiv: A senior US defense official said Ukrainians are fighting to take back the southern city of Kherson, as well as pushing Russian forces from the northeast of Mykolaiv, forcing them to reposition south of the city. The official cautioned that the US cannot say whether these moves are part of a “larger operational plan” by the Ukrainians or not, but called the Ukrainian defense “nimble” and “agile."

US President Joe Biden plans to slap sanctions this week on hundreds of Russians serving in the country’s lower legislative body, an official familiar with the announcement said.

The move is expected to kick off a slew of new steps to punish Russia for its war in Ukraine.

Biden is expected to unveil the new sanctions on members of the Duma while in Europe for a series of snap summits this week. The US had already sanctioned some members of the body, but this week’s announcement will expand the list.

Earlier, National Security Adviser Jake Sullivan previewed sweeping sanctions enacted together with US allies that are set to be announced Thursday.

He said the steps would ensure individuals aren’t able to evade sanctions already imposed by the West.

Russian President Vladimir Putin's chief spokesman has conceded that Russia has yet to achieve any of its military goals in Ukraine and refused to deny that Moscow could resort to the use of nuclear weapons.

In an interview with CNN's Christiane Amanpour on Tuesday, Dmitry Peskov repeatedly refused to rule out that Russia would consider using nuclear weapons against what Moscow saw as an "existential threat." When asked under what conditions Putin would use Russia's nuclear capability, Peskov replied, "if it is an existential threat for our country, then it can be."

Putin has previously hinted at using nuclear weapons against nations that he saw as a threat to Russia. Back in February, the Russian President said in a televised statement, "No matter who tries to stand in our way or all the more so create threats for our country and our people, they must know that Russia will respond immediately, and the consequences will be such as you have never seen in your entire history."

He then said in a televised meeting with Russian defense officials that "officials in leading NATO countries have allowed themselves to make aggressive comments about our country, therefore I hereby order the Minister of Defense and the chief of the General Staff to place the Russian Army Deterrence Force on combat alert."

When asked what Putin thought he had achieved in Ukraine so far, Peskov answered: "Well, first of all, not yet. He hasn't achieved yet."

The spokesman also claimed that the "special military operation" — the Kremlin's official euphemism for Russia's invasion in Ukraine — was "going on strictly in accordance with the plans and the purposes that were established before hand."

Peskov also repeated Putin's demands, saying that the "main goals of the operation" are to "get rid of the military potential of Ukraine," to ensure Ukraine is a "neutral country," to get rid of "nationalist battalions," for Ukraine to accept that Crimea — annexed by Russia in 2014 — is part of Russia and to accept that the breakaway statelets of Luhansk and Donetsk "are already independent states."

The US and NATO believe that Belarus could "soon" join Russia in its war against Ukraine, US and NATO officials tell CNN, and that the country is already taking steps to do so.

It is increasingly "likely" that Belarus will enter the conflict, a NATO military official said on Monday. "(Russian President Vladimir) Putin needs support. Anything would help," the official explained.

A Belarusian opposition source said that Belarusian combat units are ready to go into Ukraine as soon as in the next few days, with thousands of forces prepared to deploy. In this source's view, this would have less of an impact militarily than it will geopolitically, given the implications of another country joining the war.

A senior NATO intelligence official said separately that the alliance assesses that the Belarusian government "is preparing the environment to justify a Belarusian offensive against Ukraine."

Russia has launched its attack on Ukraine in part from Belarus' territory, and thousands of Russian troops amassed in Belarus ahead of the Kremlin's invasion of Ukraine last month, which the two countries had claimed was for training exercises. US and European sanctions in response to the war have targeted both Russian and Belarusian officials, including Belarusian President Alexander Lukashenko.

"Ukraine to Russian forces is the wall that separates them from Europe. But barbarians must not pass," Zelensky told Italian lawmakers during a virtual address.

The Russian invasion "will ruin more lives, more families, and the full-scale war will continue. Unfortunately, Russian missiles artillery is not stopping the bombing of our cities, all of the some of them have been almost destroyed completely," he said, adding that in Mariupol there is nothing left, "just ruins like armageddon."

"You know who brought war to Ukraine you know them very well. You know who is ordering war and who is promoting it. Almost all of them use Italy as a holiday resort. So do not be a resort for them. Block their properties, seize their accounts, their yachts from Scheherazade to the smallest one."

It’s been nearly a month since Russia launched its invasion of Ukraine, deploying tens of thousands of troops into an offensive against its neighbor from three sides.

While Ukraine’s military is much smaller, its forces have mounted a fierce resistance that has managed to hold off Russian advances in some parts of the country. A senior NATO intelligence official said Monday signs were pointing to a stalemate emerging in Russia’s offensive, with Russian ground forces remaining stalled and Russian combat aircraft unable to achieve air superiority.

Precisely how many Russian troops have been killed in their campaign thus far is unclear.

On March 2, a Russian Defense Ministry spokesman put the number of dead Russian military personnel at 498. But that number has not been updated by officials since then.

Then on Monday a pro-Putin Russian tabloid published — then later removed — a report with an updated toll of 9,861 Russian armed forces deaths in the war in Ukraine, citing the Russian Defense Ministry.

The report from the tabloid Komsomolskaya Pravda originally read: "According to the Russian Defense Ministry, during the special operation in Ukraine, the Russian Armed Forces lost 9861 people killed and 16153 wounded."

CNN analyzed the website’s HTML code, which indicated that the article was published on Monday at 12:09 a.m. Moscow time.

Seconds after CNN read the original article — at 9:56 p.m. Moscow time, according to the HTML code -- the story was updated and all references to the death count were removed. That update on the outlet's website came shortly after the article began to get attention from social media posts, which referenced the death count.

The original report from the tabloid is in line with US Department of Defense estimates that there have been up to 10,000 Russian military deaths. Ukraine has put the number even higher.

CNN is not able to independently verify any of these figures.

After the update, Komsomolskaya Pravda, published a statement saying that "access to administrator interface was hacked" and that "a fake insert was made into a publication."
They claimed that "inaccurate information was immediately removed." CNN analysis showed that the update came after 21 hours.

The Kremlin dodged questions on the course of the war in Ukraine, which were put to the Defense Ministry on Tuesday. The ministry said it "does not have the authority" to publicize a count of Russia’s military deaths while the "military operation" is still ongoing.

www.cnn.com - 5 months ago
A Brazilian man reportedly survived 11 days in the Atlantic Ocean last month, taking refuge inside a freezer after his boat sank, according to CNN affiliate Record TV.
Read More

www.cnn.com - 5 years ago
There she is... I think I see her,"an anxious Anthony Wiggs told Raymond Abreu."With the sunglasses on."
Read More

www.cnn.com - 2 years ago
Russia has announced it is hitting several European Union representatives with tit-for-tat sanctions in response to those imposed by the bloc over the poisoning of Russian opposition leader Alexey Navalny.
Read More

WHO to certify India polio-free

www.cnn.com - 9 years ago
India is to be certified polio-free by the World Health Organization after going...
Read More
More News & Articles