Days From Its Delayed Football Opener, Cal Is Stalled Again by the Virus

As the Pac-12 Conference prepared to begin its football season this weekend, later than any other major league, Cal had to cancel its game against Washington because a player's positive test for coronavirus left the team without enough eligible athletes.
Author: John Branch
Published: 2020-11-06 11:30 am 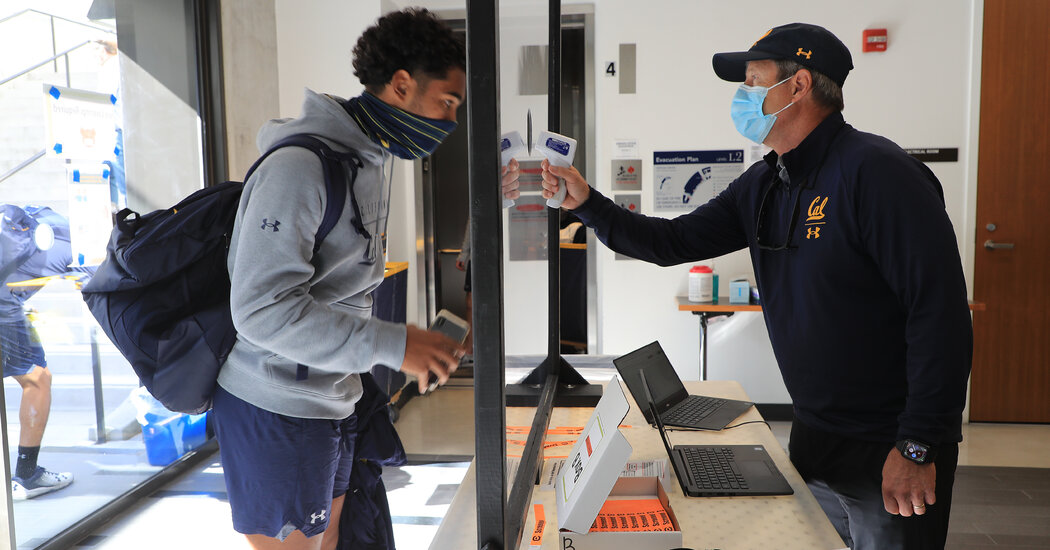 Gloria Kaci, the director of stadium event operations at Cal, led a Zoom meeting on Monday to organize logistics for the football team’s season opener on Saturday night. She directed about 60 employees from across the athletic department.

A major college football game during regular times is a complex puzzle, with a stadium full of fans, but places like Cal have held them for decades. The game-day process has embedded itself into institutional muscle memory.

Hosting a football game during a pandemic means rethinking almost everything.

“Hold on to your hats, because it’s going to be a very bumpy ride,” Kaci told the group.

The ride came to an abrupt end on Thursday. At noon, Kaci sent an email to the athletic department.

“It is with disappointment that we must announce that Saturday’s game vs. Washington has been canceled,” she wrote.

An unnamed Cal player had tested positive for the coronavirus earlier in the week. With the required isolation of those in contact with him, including his entire position group, Cal could not stage the game.

The game was declared a “no contest” by the Pac-12 Conference on Thursday. There are no immediate plans to reschedule it.

Coach Justin Wilcox declined to say how many players were required to isolate, in accordance with local health guidelines, but it extended beyond one position and included non-players. All have continued to test negative, Wilcox said. The university, set in Berkeley, is negotiating with health officials there to determine when each isolated member of the football program may return to team gatherings, since extended isolations could jeopardize the Nov. 14 game at Arizona State, too.

“We are confident that we have made the right decision,” Jim Knowlton, Cal’s athletic director, said. “As we have seen across the country, we knew that there would be Covid-19 challenges, and we will continue to follow our protocols to support the health of our student-athletes.”

With its first games on Saturday, the Pac-12 will become the last major college conference to start its football season and to try to squeeze in a condensed schedule before the end of the year. It feels a bit as though the league is arriving late and sober to a party full of tiring drunk people.

The Times has highlighted some of these challenges through the experience of one big-time athletic department — Cal, the flagship campus of the University of California system, with 30 sports and a $100 million annual budget. Like hundreds of other colleges, Cal faces the challenge of maintaining a bustling sports academy within the structure of an academic institution.

Cal, like the rest of the Pac-12, initially said it would wait until 2021 to play games and postponed all its fall sports. In October, nudged by the availability of daily testing and the growing sense of peer pressure to join the party, the Pac-12 decided to start football after all.

The league created a conference-only seven-game season, beginning the first weekend of November. There would be no time for bye weeks, because the Pac-12 wanted its champion to be eligible for a four-team national playoff starting on Jan. 1.

Cal, coming off an 8-5 season, has hopes for a league title behind the experienced quarterback Chase Garbers. Practice began last month. Cal tested athletes before each workout, required masks at all times and preached the importance of avoiding the virus.

But on Wednesday, Wilcox revealed that a player had tested positive, though he had experienced no symptoms.

By Thursday, the game was off. Wilcox expressed frustration that one positive test could cancel one or more games, when he has seen teams in other parts of the country continue playing.

“I absolutely agree that there are different interpretations of contact tracing,” he said in a call with reporters on Thursday afternoon.

During the staff meeting on Monday, when the game was still scheduled, Kaci pressed for answers on all the unusual conditions: There would be no fans, no cheerleaders, no family members.

How would they keep would-be tailgaters and curious fans away? What if high-powered boosters or families of players beg to come or just show up? How many people could be in the press box? How and where would they conduct the mandatory pregame coronavirus testing for the teams?

“I don’t think I’ve ever sat on a game day Monday with so many questions,” he told the group.

Days later, it was all a moot point. Kaci’s email summed it up.

“Our next home game will be on November 27th vs. Stanford — The Big Game,” she concluded.

Plans will be made.

www.nytimes.com - 2 months ago
Many low-income nations lacked the means to preorder doses, and their residents have received just .1 percent of vaccine shots given worldwide.
Read More

Jimmy Kimmel Has a Name for Trump’s Refusal to Concede: ‘Squattergate’

www.nytimes.com - 6 months ago
“Why don’t we just make him president of Alaska?” Kimmel said Thursday. “He’d love it. It even sounds like the names of his wives and daughters: Melania, Ivana, Ivanka — Alaska.”
Read More

Richard Lapointe, Exonerated in a Murder Case, Dies at 74

www.nytimes.com - 9 months ago
Advocates worked for decades to free him in the murder of his wife’s grandmother in Connecticut; in 2015 a court finally agreed.
Read More