Amy Poehler's "Parks and Recreation" character had a deep love for Joe Biden, who was announced as the presumed winner of the 2020 presidential race on Saturday.
Author: Marisa Dellatto
Published: 2020-11-07 05:49 pm 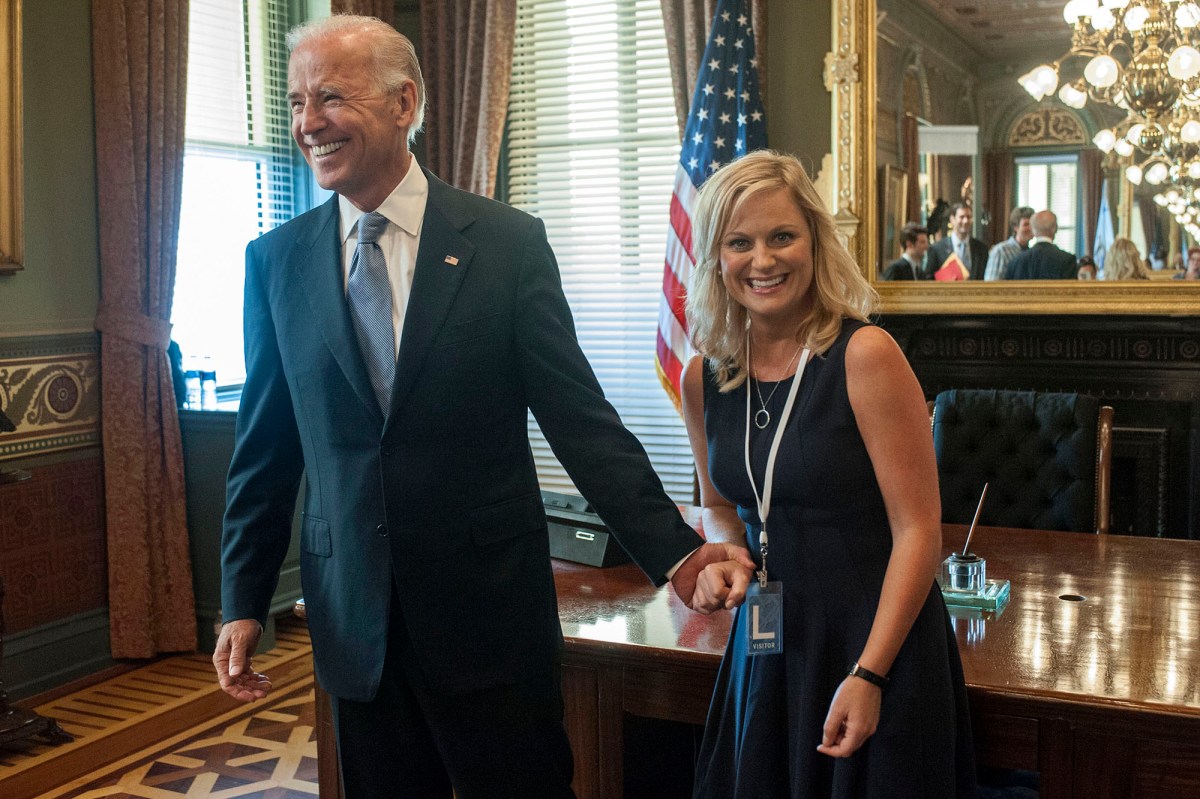 Just add a side of waffles, and Joe Biden winning the election would be the greatest day of Leslie Knope’s life.

Amy Poehler’s “Parks and Recreation” character had a deep love for Joe Biden, who was announced as the presumed winner of the 2020 presidential race on Saturday.

On the show, Knope called Biden “the only other man who’s as sexy” as her on-screen husband Ben Wyatt, played by Adam Scott. She had described her ideal man as having “the brains of George Clooney in the body of Joe Biden.”

In one 2012 episode, Knope meets Biden, 77, an introduction made by Wyatt as an engagement gift.

“I’m told you’ve done such a great job with your town and in the state of Indiana and I just want to say congratulations on your public service,” the now-president-elect tells Knope, holding her hands.

“I just want to say thank you,” Knope replies, grabbing his face, trying to lean in to kiss him. “You’re very handsome.”

Biden also appeared in the “Parks and Rec” finale episode. Leslie and Ben move to Washington D.C., and become friends with Biden and his wife, Dr. Jill Biden. The Knope-Wyatt couple is invited to the Biden house for dinner parties and games of charades, much to the former Vice President’s dismay.

“Meeting Vice President Biden was a thrill for me and for Leslie,” Poehler said in a statement in 2012, according to The Huffington Post. “He was a good sport and a great improviser. The Vice President maintained his composure while I harassed him and invaded his personal space. The nation of ‘Parks and Rec’ will be forever grateful.”

“Vice President Biden is both Leslie’s political hero and her number-one celebrity crush, so meeting him is obviously a huge moment for her. We looked at a number of actors to OK the role of ‘Vice President Joe Biden,’ and ultimately, Joe Biden himself gave the best audition.”

Buzzfeed to acquire HuffPost from Verizon Media in stock deal

nypost.com - 2 years ago
Verizon Media, a unit of Verizon Communications, said Thursday it would sell its news website HuffPost to BuzzFeed.
Read More

nypost.com - 7 months ago
She didn't keep her discovery private, that's for sure.
Read More

nypost.com - 3 weeks ago
The Yankees may lead MLB with an astronomical 168 home runs this season, but Aaron Boone doesn't agree with the concept that they rely too much on the long ball.
Read More

nypost.com - 7 months ago
Eric Chavez didn’t even work a game as Yankees assistant hitting coach, but is headed to the Mets for a promotion under Buck Showalter.
Read More
More News & Articles