Daxton Hill has been a quick riser in recent weeks, especially since the versatile defensive back opened eyes with his speed at the NFL Scouting Combine.
Author: Ryan Dunleavy
Published: 2022-04-22 05:49 pm 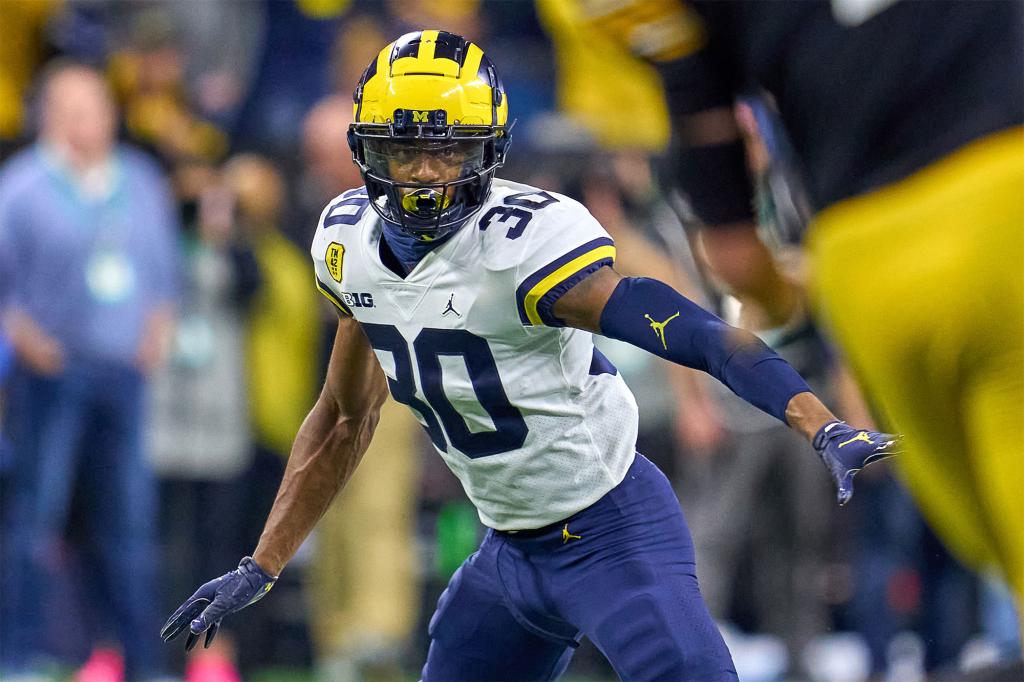 Daxton Hill has been a quick riser in various mock drafts in recent weeks, especially since the versatile Michigan defensive back opened eyes with his speed at the NFL Scouting Combine last month.

Notre Dame’s Kyle Hamilton has been the consensus top-rated safety on every board for this draft cycle, but he might not be the only player at that position deserving of a selection in the first round.

Hill, the younger brother of Ravens running back Justice Hill, is currently being projected to go at No. 25 to the Bills by ESPN draft expert Mel Kiper Jr. If he falls to the second round, Hill could be available for either the Jets, who lost safety Marcus Maye to New Orleans in free agency, or the Giants.

“I’ve always liked Daxton Hill,” Kiper said on a conference call last week. “Here’s a guy who did everything at Michigan. He can be a slot corner. He can play center field. He tackles so well, he can get after the quarterback, he intercepts passes.

“He was a five-star recruit coming out of high school [in Oklahoma], No. 1 safety, speed to the football, everything that shows you he’s going to be ready to go. He’s perfect for the way the game is played today.”

Hill technically is listed as a safety, but the junior was positioned all over the field on a loaded Michigan defense that also boasted the potential No. 1 overall pick in this year’s draft, defensive end Aidan Hutchinson, in the second-ranked Wolverines’ run to national semifinals and an Orange Bowl loss to Georgia, the eventual national champions. Linebacker David Ojabo also was considered a potential top-10 pick before he suffered a torn Achilles at Michigan’s Pro Day last month.

Hill’s stock has risen since he posted a time of 4.38 seconds in the 40-yard dash — the 14th fastest among all participants — at this year’s NFL Scouting Combine. After Hamilton, Hill is widely listed atop the next group of available safeties, along with Georgia’s Lewis Cine, Baylor’s Jalen Pitre and Cincinnati’s Bryan Cook.

“Really, it’s my versatility and the amount of things I can do on the field,” Hill said after Michigan’s Pro Day. “Everything is kind of up in the air, and you don’t know where you’re gonna be picked. The only thing I can control is how I perform and interview, so I think those two components are the two best things working for me right now.

Hill says he’s spoken to his brother, who was chosen in the fourth round by the Ravens in 2019, about how to approach his discussions with interested NFL teams. Both siblings declared for the draft following their junior seasons, with Justice Hill playing collegiately at Oklahoma State.

“For sure, he’s always in my corner, because he was three-and-out … so you have more eyes on you,” Daxton Hill said. “He was just telling me to keep the same confidence that I always have and just let everything come to me. That’s just how it is, whenever you’re an underclassmen, a junior, they want to see why you’d leave early.”

While Kiper ranks Hill as his “13th-best player” on his overall board, ESPN colleague Todd McShay said he believes Hill could hear his name called as high as “the 15-20 range” next Thursday night.

“Dax Hill, the safety from Michigan — this guy has been overlooked because we talk so much about Kyle Hamilton from Notre Dame at the safety position,” McShay said this week on an ESPN podcast. “The interesting part with Dax is he’s sitting at just over 6-foot, 191 pounds, ran a 4.3 in the 40-yard dash, had the best three-cone drill of all the safeties at the NFL combine this year.

“But he’s not just a single-high safety that can cover basically the whole field. He is a playmaker and he’s also a nickel corner that occasionally you could actually trust out on the perimeter one-on-one in coverage. He’s the best pure cover safety in this class.”

Hill was a first-team All-Big Ten selection this season after totaling 69 tackles (4.5 for loss) with two interceptions and eight pass breakups in 14 games. Among all defensive backs, Kiper ranks him behind only Cincinnati’s Ahmad “Sauce” Gardner, LSU’s Derek Stingley Jr. and Hamilton.

“You go back to grades and film, he’s a slot corner. And you can make an argument he’s one of the best slot corners,” Kiper said. “At safety, there are some guys that after the first five or six you’re a little iffy on. I think Daxton Hill could be one of the most underrated defensive players in this draft.”

A fourth monolith has been found — on the Isle of Wight

nypost.com - 2 years ago
There’s nothing “mono” about these anymore, that’s for sure. A fourth monolith — similar to ones found in the US and Romania — was discovered Sunday on the Isle of Wight. The mysterious metal object was spotted by a local on the island off the south coast
Read More

Olympic athletes to put on own medals at Tokyo ceremonies

nypost.com - 3 weeks ago
A Georgia grand jury investigating possible illegal interference by former President Donald Trump and his allies in the 2020 election has wrapped up its probe and has submitted its final report.
Read More
More News & Articles