Injuries, fatigue and concern are already mounting amid an unforgiving schedule. But for Europe’s top teams, the worst is still to come.
Author: Rory Smith
Published: 2020-11-09 09:27 am 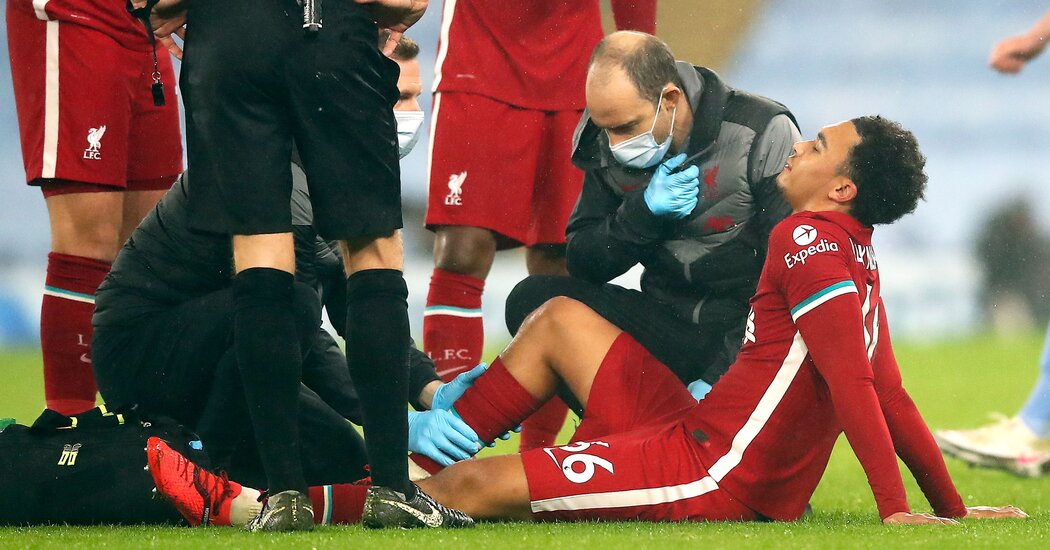 MANCHESTER, England — For a moment, it looked as if Jürgen Klopp was taking issue with Pep Guardiola. Klopp, the Liverpool manager, had sought out Guardiola. his Manchester City counterpart, as soon as the final whistle had blown on their teams’ draw on Sunday. Klopp pulled Guardiola in close, and then swept his arm out across the field, gesticulating at two sets of players heaving with exhaustion, his face serious and his brow furrowed.

The rivalry between these clubs is a curious one. Their prominence and potency should, strictly speaking, make it as compelling as defining feuds of the Premier League’s history: Alex Ferguson’s Manchester United against Arsène Wenger’s Arsenal, José Mourinho’s Chelsea against both of those teams and also pretty much everyone else. Liverpool and City are, after all, the two dominant forces of their era.

And yet, even as the teams have traded blows and broken records, the rivalry has always fallen somehow short: a little too petty to feel serious, a little too manufactured to seem authentic. The greatest rivalries are underpinned by a contempt rooted in familiarity; they are arguments conducted in a common language over common ground. Liverpool and Manchester City, with their utterly contrasting priorities and identities, do not have that. Too often, their rivalry feels like little more than shouting.

Except, of course, when it comes to Klopp and Guardiola. Their relationship has always been more than cordial. It would be too far to suggest they are friends; watching them in close quarters, away from the field, it is possible to observe just how different they are as characters. The competition between them, certainly, is intense.

But the respect and admiration goes beyond mere news conference sound bite; the paeans of praise that flow between them over the course of a season are not, as they are often presented, salvos in some ongoing psychological war. Each holds the other in high esteem. Each regards the other as an equal, or at least something close to it.

And so, as Klopp pulled Guardiola in close on Sunday evening, he was not remonstrating or complaining or picking over some old scar. He was, instead, recruiting him to his cause. He was, as it turned out, preaching to the converted. “We are going to fight, him and myself,” Guardiola said, a few minutes later.

What followed, over the next hour or so, was an opening and sustained offensive in that battle. Klopp completed what may be soccer’s unlikeliest triumvirate by offering his backing to the Manchester United manager Ole-Gunnar Solskjaer — very much the Crassus in this story — in his complaint over the Premier League’s television scheduling: United was forced to play in the early slot on Saturday, despite having a Champions League engagement in Turkey last Wednesday.

Then both Klopp and Guardiola, again and again, turned their fire on the Premier League’s decision to plow on through this cramped and compacted season with each team allowed only three substitutions in each game.

Every other major league, as well as the Champions League, has accepted a temporary change to permit five subs, a nod to how intense the schedule has to be to get everything finished in time for the European Championship next summer. The Premier League stands alone in its reverence for tradition. “This country likes to be a little bit special,” Guardiola said, a withering assessment that applies to Britain in ways far beyond how many players there are in a match-day squad.

The timing was no accident. Liverpool’s visit to the Etihad — a game that ended in a 1-1 draw, and left Liverpool third and Manchester City 11th in the still-young Premier League table — had been dressed up as the title race’s key early turning point, despite the overwhelming evidence that this season will be decided not by elite showdowns but by a long, attritional slog.

For 45 minutes, it lived up to its ambitious billing, the sort of game one would expect between the two best teams in the country. Liverpool tore at City and City tore at Liverpool as, in the background, the strategies kept shifting and the chess pieces kept moving and the ideas kept whirring.

And then it all stopped. Trent Alexander-Arnold hobbled off injured. Liverpool pulled back, just a little, Klopp’s players aligned in two disciplined banks of four, content to stifle. City had a little more left in the legs and in the lungs, but only a little. With five minutes to play, Guardiola turned and barked at Phil Foden, his explosive young midfielder. Get ready. All or nothing. With three minutes left to play, Foden sat down again. This was no time to gamble.

That was what brought Klopp and Guardiola together: the sense of a showpiece only half-fulfilled, of a mission that could not be willing. It is something that both fear the Premier League will have to get used to. These opening weeks of the season, as Klopp alluded to, have been the easy bit. What comes next is much worse.

There are two threads to the argument against implementing the five substitutes rule. One is that a raft of changes in the second half of a game interrupts its flow — as often happens amid the inconsequential vapidity of international exhibition games — and ruins its spectacle.

The second is that such a shift gives yet another advantage to the elite teams, the ones that can afford to assemble deeper squads. True, they must deal with the demands of playing in European competition, too, but perhaps that just levels the playing field a little? It is a good thing, surely, that quarter of the way through the season, the top four in the Premier League reads Leicester City, Tottenham, Liverpool, Southampton?

The former is easy to contradict: what happened in the second half of Manchester City’s game with Liverpool stands as powerful testimony that there is more than one way to spoil a spectacle.

The latter has more merit. The elite have enough advantages; they do not need another. Five substitutions just means five more international-class players to bring on. The richest teams would, without question, benefit disproportionately from a change. (Though, as a glance at the league tables in Spain and Italy would suggest, perhaps not by that much.)

But that rather ignores what concerns Klopp and Guardiola. Before the end of the year, almost every Premier League team will face the sort of burden that ordinarily is borne only by teams in the Champions League and Europa League: a game every three days, a relentless, unyielding schedule that tests players to the limits.

The injuries and the fatigue will mount. Those teams — Southampton, Aston Villa, Everton — that have lit up the early part of the season will fade as they enter what Wenger always used to call the red zone. Stars will miss games, or, worse, whole stretches of them. For teams without the depth to replace like with like, the results will turn.

And, at the end of it, those left standing will be those who have been able to weather it best, the teams with the deeper squads. That is proof, if anything, of how weighted the status quo is toward the established elite. And that, deep down, is what makes Klopp and Guardiola’s argument compelling. Offering managers more chance to rotate players will not, most likely, alter the outcome very much. Everything is heading in the same direction anyway. All that changes is how many players get injured along the way.

www.nytimes.com - 2 months ago
Michael A. Riley, a veteran of the force, encouraged a man in the Capitol during the riot to delete social media posts showing he was there, according to the indictment.
Read More

The U.K.'s New Coronavirus Strain and How to Stop It

Famine Hits 350,000 Ethiopians, Worst for Any Country in a Decade

www.nytimes.com - 6 months ago
United Nations agencies said the crisis in Ethiopia’s conflict-ravaged Tigray region had plunged it into famine. “This is going to get a lot worse,” a top aid official said.
Read More

www.nytimes.com - 3 years ago
As with beauty, the meaning of “old” depends on the person you ask.
Read More
More News & Articles