Senate Republicans have one clear edict from Mitch McConnell heading into the midterms: Embrace electable candidates who can reclaim the majority. Actually achieving that goal is proving impossible. Most of them remember Christine “I am not a witch”
Author: Burgess Everett
Published: 2022-05-14 07:00 am 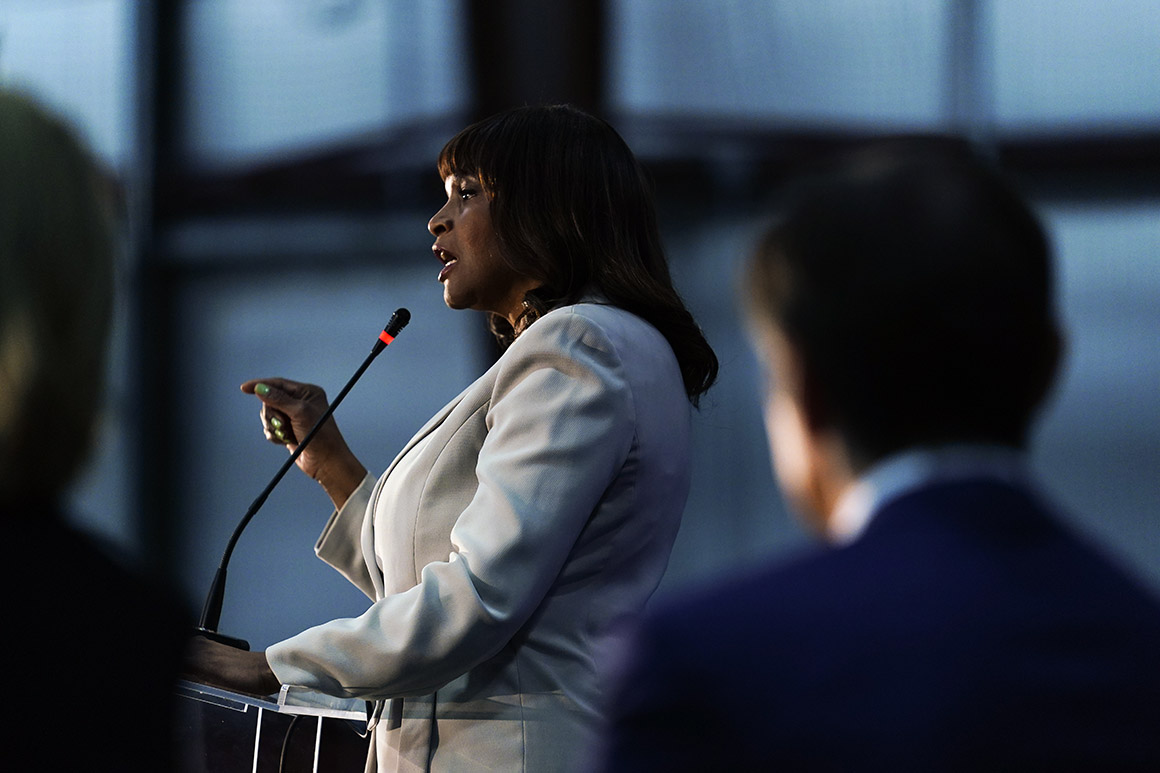 And nowhere is the downside of a free-for-all approach more potent for Republicans than in Pennsylvania. Former President Donald Trump is, improbably, openly trying to help the state’s Republicans meet McConnell’s electability test more than the National Republican Senatorial Committee, most GOP senators or the minority leader himself.

Republicans long assumed that either Mehmet Oz or David McCormick would prevail in Tuesday’s primary. A half-dozen GOP senators said this week that they hadn’t even heard of right-wing Pennsylvania Senate hopeful Kathy Barnette until reading stories by POLITICO and the Philadelphia Inquirer about her rise.

“She’s apparently kind of surging, is what I keep hearing, but I do know Dr. Oz. And I know McCormick just by reputation. I think either of those could get elected in the general election,” said Sen. John Cornyn (R-Texas), a former NRSC chair. “I just don’t know her.”

Some of them have endorsed either Oz or McCormick, and Sen. Ted Cruz (R-Texas) is even campaigning for McCormick down the stretch. But no one is really raising the alarm about Barnette’s questionable ability to win this fall, besides the former president.

Trump said in a telerally for Oz on Thursday night that “the problem is nobody knows what she is, what she stands for, who she is. It’s very risky.” Asked whether he worries about Barnette winning, McConnell would only say: “We’re all watching with interest.”

The stakes are incredibly high in the battle to replace Republican Sen. Pat Toomey of Pennsylvania. If Republicans lose, their path back to the majority becomes much more complex, requiring them to net at least two seats elsewhere on a 50-50 Senate map filled with battle-tested Democratic incumbents.

While it’s too early to compare the GOP’s plight to the debacles in 2010 and 2012 that frittered away competitive Senate races, there’s a rising sense of unease among party insiders that Republicans could end up with candidates who make a Senate takeover more difficult. Barnette is the most immediate worry, though former Gov. Eric Greitens in Missouri, state Rep. Ron Hanks in Colorado and Arizona’s Wild West primary are all viewed as potential stumbling blocks to a GOP takeover.

But there’s no consensus about the right tactics to avoid that fate. Whereas Trump is attacking Barnette as “very risky” in a general election, NRSC Chair Rick Scott (R-Fla.) says he’d be comfortable if Barnette is the nominee. For Scott, the hands-off approach in primaries is personal after national Republicans gave him the cold shoulder in Florida’s 2010 gubernatorial race.

“The voters do a better job of choosing the right candidate for their state than people in Washington,” Scott said in an interview. “Nobody supported me in 2010.”

Senate Republicans’ heavy-handed approach in 2010 didn’t exactly work either: Just ask NRSC-endorsed Charlie Crist, a Republican-turned-Democrat who lost his 2010 primary battle to now Sen. Marco Rubio (R-Fla.). Some in the party want to try a different approach: rather than picking candidates in primary fields, they’d like to focus more on calling out risky Republican hopefuls. That way, the GOP could follow through on its pledge not to nominate general election losers.

“Even if [Scott’s strategy] works out, it undoes a decade of work and sets a new precedent for how we operate as a party,” said a person familiar with the committee’s work, granted anonymity to speak candidly given the tension between Scott and McConnell over conservative campaign messaging.

NRSC spokesperson Chris Hartline said in a statement for this story: “The NRSC’s job is to protect incumbents and win general elections. Period. Anyone who thinks otherwise is deluding themselves and is disrespectful of voters. Washington has a terrible track record of picking and choosing candidates.”

Nonetheless, there are some signs that the GOP establishment isn’t caught completely flatfooted. Sen. Richard Shelby (R-Ala.) teamed with the McConnell-aligned Senate Leadership Fund to pound Rep. Mo Brooks in Alabama, a state Republicans fumbled in 2017, according to The Hill. Republicans are also backing Sen. Lisa Murkowski (R-Alaska) against a Trump-backed candidate.

Neither state, however, is viewed as competitive in a general election.

Scott has raised the alarm about Greitens, a scandal-tarred former governor whose allegations of abusing his wife are well-known across the GOP conference. But Greitens may be the exception to the don’t-get-involved rule. Scott says as he surveys the Senate map, “the one person that people are worried about is Eric Greitens.”

As much as McConnell and his lieutenants discuss electability, there’s also a disagreement among Republicans about whether candidate quality even matters to an increasingly polarized electorate and with President Joe Biden’s polls sagging. Retiring Sen. Roy Blunt (R-Mo.) argued it does: “Candidates matter. We want electable candidates.”

But Sen. Mike Braun (R-Ind.) said atmospheric conditions are so good for Republicans that it’s less of a concern this cycle.

“Yes, if you get somebody that’s just that far out there, we’ve run through that before where you win the primary and lose the general,” Braun said. Still, he added, candidate quality is going to matter “less because of the performance of the Biden administration to date.”

Like Barnette, Braun benefited from a three-way race in 2018, ousting two feuding GOP congressmen in his primary as Republican leaders let things play out.

Sometimes, however, the party makes a different decision, like when it openly declared war on Kris Kobach’s ultimately unsuccessful Senate bid in 2020. Kobach was a proven loser, blowing the 2018 governor’s race in a conservative stronghold.

Barnette is harder to gauge because Republicans are still getting up to speed on her, a reflection of her late-surging campaign.

“What do you know about her?” Sen. Roger Wicker (R-Miss.), a former NRSC chair, quizzed a reporter. “I’d really not heard her name until Monday.”

Barnette wants McConnell gone as leader, has targeted LGBTQ people and Muslims in her rhetoric and declined to answer basic biographical questions. She’s also focused on false claims of a fraudulent 2020 election, something Republicans have urged their candidates to avoid.

Yet despite all that, Republicans are mostly declining to condemn her. Some even think she could beat Pennsylvania Lt. Gov. John Fetterman, the favorite in the Democratic primary. Sen. Joni Ernst (R-Iowa), a member of leadership, endorsed Barnette, as did influential anti-abortion group Susan B. Anthony List.

McCormick backer Sen. Dan Sullivan (R-Alaska) said of Barnette’s viability as a general election candidate: “I have no real idea. I didn’t even know it was happening.”

“I don’t know what her baggage is,” said Sen. Kevin Cramer (R-N.D.), who has endorsed Oz. He conceded that staying out of primaries is a risk — but so is doing anything else.

Neutrality, he argued, is “the safe bet for the party, for the conference, for the NRSC.”

www.politico.com - 11 months ago
BRUSSELS — President Joe Biden is placing a big bet that he can do what his immediate predecessors couldn’t: forge a relationship with Russian President Vladimir Putin based on skepticism and stability. Biden isn’t overly optimistic about what can be
Read More

www.politico.com - 2 years ago
The Justice Department filed an antitrust lawsuit against Google on Tuesday along with several Republican-led states, unleashing the might of the U.S. government against one of Silicon Valley's most powerful companies. The complaint was filed in
Read More

How Trump’s Crowd Obsession Could Bite Him Back

www.politico.com - 2 years ago
It is Donald Trump’s worst nightmare: giving his acceptance speech in front of a half-empty arena, facing an audience whose faces are covered in masks, muffling their cheers and chants. But it is exactly what he may be facing if last month’s edict from
Read More

www.politico.com - 1 day ago
President Joe Biden announced on Wednesday that he was invoking the Defense Production Act to speed up the manufacturing of U.S.-made infant formula, as well as directing government agencies to use the Defense Department’s commercial aircraft to pick up
Read More
More News & Articles