Shoppers at Massachusetts store get into spat over baby formula: video

Shoppers at a store in Massachusetts got into a heated spat over the baby formula shortage when one woman emptied an entire shelf of products.
Author: Allie Griffin
Published: 2022-05-20 01:33 am 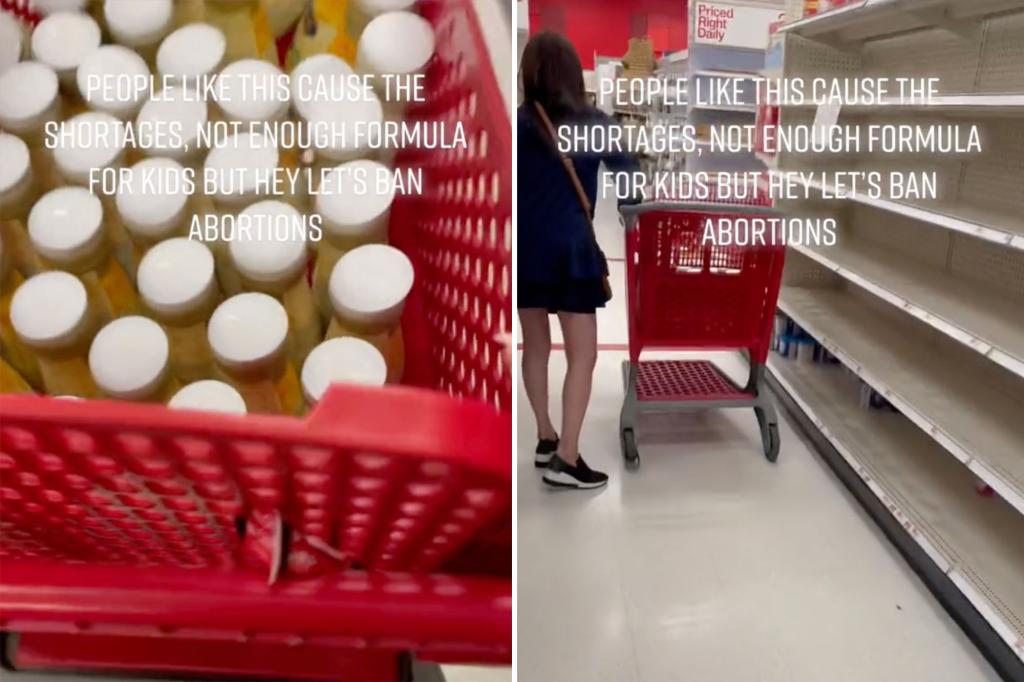 Shoppers at a store in Massachusetts got into a heated spat over the baby formula shortage when one woman emptied an entire shelf of products, video posted online shows.

A young mother shopping for formula at a Target store filmed another shopper who had apparently taken all the baby formula available and dumped it into her cart, according to footage posted on TikTok.

“I have a child at home to feed and you just clear the whole [shelf],” the mother said as she filmed the other woman.

The mom filmed the woman’s cart full of dozens of bottles of baby formula and then panned over to the empty shelves.

“You just cleared the whole shelf of all of this formula,” she tells the other woman. “You have a whole cart. Look at this, look at all this. Look at the shelves”

The shopper responds that she’s a mother herself who needs to feed her child.

“But I need it for my baby,” she replies.

“You don’t think I need it for my baby too?” the woman filming replies.

She said people like her are the reason there is a crippling nationwide baby formula shortage.

“This is the whole reason there’s a formula shortage.”

“You come and buy all the formula at once and there’s kids who need formula today who won’t be able to get it because you just bought it to stock up,” she says as the woman begins to walk away. “That’s not your problem right?”

The shortage is affecting parents of young children across the country. Parents in New York City have been desperately scavenging stores and online retailers for the formula for weeks.

The shortage largely stems from the February closure of a Michigan manufacturing plant after popular powder formulas produced there were linked to two baby deaths and several reported illnesses. Three large brands of formula were recalled as a result.

President Joe Biden invoked the Defense Production Action Wednesday to speed up US production of the formula and also launched a government airlift of formula from abroad.

The administration finally took action after critics and parents slammed the president for not acting sooner to avert the crisis.

nypost.com - 2 years ago
The New York Public Library is running out of patience…and fortitude. That’s thanks to vandals who in recent weeks have been targeting the famed pair of marble lion statues that stand guard outside of the library’s historic Midtown branch — by damaging or
Read More

nypost.com - 1 year ago
He was one of NYC’s most celebrated pizzaiolos before the feds put him behind bars back in 1996. Today, infamous pie man Andrew Bellucci is back tossing dough in NYC — and swears he’s finally gone legit. “I’ve run away so many times,” Bellucci, 57, a pizz
Read More
More News & Articles