A 24-year-old entrepreneur has launched a line of basketball sneakers that’s designed exclusively for women — and it all started with a Nike Ad. Natalie White, then a senior at Boston College in 2020, saw an ad featuring four of the top WNBA players
Author: Kirsten Fleming
Published: 2022-05-20 11:53 am 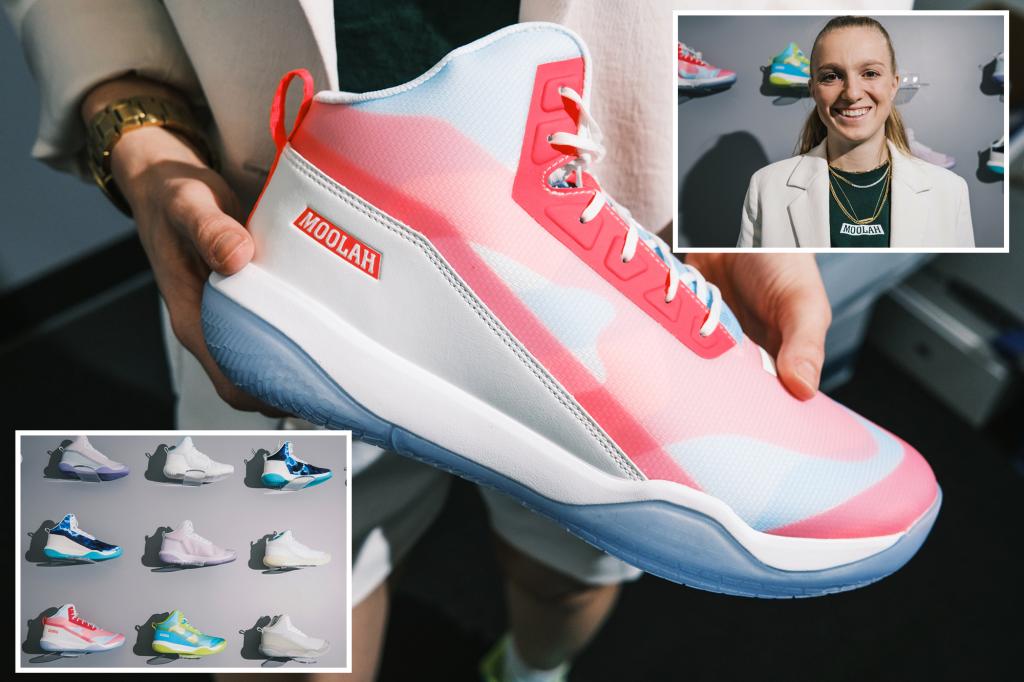 A 24-year-old entrepreneur has launched a line of basketball sneakers that’s designed exclusively for women — and it all started with a Nike Ad.

Natalie White, then a senior at Boston College in 2020, saw an ad featuring four of the top WNBA players promoting various sneakers — all of which were named after male NBA players.

“It was basically Sue Bird, and under her name it said ‘Kyrie 6,'” White told The Post, referring to Kyrie Irving’s signature Nike Kyrie 6 sneaker.

“I thought, ‘How wrong is this?’ Basketball is one of the most widely played sports by women in the US and instead of having their own sneakers, they are promoting a men’s shoe.”

But what started out as righteous indignation quickly morphed into a clever business idea.

As the Manhattan native researched the industry, she realized that not only did WNBA ballers not have signature shoes, they didn’t even have proper women’s basketball shoes. Instead, basketball kicks from top brands are made to fit the male foot and marketed as unisex.

That makes basketball a curious outlier: Every other major sports category — running trainers and soccer cleats included — has designs that are crafted specifically for the female foot.

“I said ‘Oh my god, this is a huge performance issue. It ends up hurting your ankle, knee and body systems,” White told The Post.

Still at BC, she started interviewing physical therapists, athletic trainers and podiatrists who confirmed her suspicions. “In the medical field it’s widely known, girls are playing in sneakers that don’t truly fit them.”

Now, two years later, White is the bona fide CEO of a shoe company. Her brand Moolah Kicks is carried exclusively by Dick’s Sporting Goods in 140-plus stores. On Friday, Moolah Kicks is releasing its second drop which comes in four color ways. The fledgling firm has cut name, image and likeness — or “NIL” — deals with about 40 female college hoop stars and is sponsoring top AAU teams for summer tournaments.

“We have ball players reaching out to say they want to be a Moolah athlete,” White said. “To have them on shelves and get that feedback, it’s unbelievable.”

But first came the so-called “last” — that is, the proprietary foot mold that would be the Moolah base. Armed with her medical and market research, she reached out Brockton, Mass.-based Jones & Vining, which makes lasts for many top footwear brands. It took 22 calls before she landed a meeting in spring of 2020.

“I’m pushy. You keep working until you get the result you want,” White said.

Jones & Vining CEO Jim Salzano said he was “intrigued” by White’s intensity — and admitted that her discovery about women’s basketball shoe designs was news to him, too.

“I was shocked,” Salzano told The Post. “I said, ‘There aren’t any women’s basketball sneakers out there?’ I had no idea until Natalie came in here. Nobody had been paying attention to this.”

They fabricated a last that supports the biomechanical needs of the female basketball player: The heel is more narrow, the arch is lifted and the toe area is more shallow. “In layman’s terms, men’s feet are more brick-like and women’s have more shape,” said White, who now counts Salzano as an advisor.

Shortly thereafter, COVID shut down college campuses and businesses alike. Sent home by BC, White began working on Moolah nonstop and applying to numerous accelerators. But she was turned down by all of them.

“They didn’t understand what I was doing,” White said. “From there, I bootstrapped the whole operation.”

By May 2021, she had created samples and launched a pre-order campaign that netted some media attention and traction. She was then able to get into one of the top factories for performance footwear in the world and connected with Dick’s, which at the time was running a campaign about its commitment to girls sports.

White signed on for an exclusive partnership with the retailer and raised a seven-figure investment from various VC firms. Within 12 months, Moolah kicks was in stores.

Moolah also has taken a unique approach to NIL deals. It has signed Division 1 athletes — including Penn State’s Anna Camden, LSU’s Alex Morris and Alabama’s Myra Gordon — who aren’t able to wear Moolah Kicks on the court because of their schools contract with other brands.

Nevertheless, they are Moolah Kicks ambassadors and promote the shoes on social media. Moolah Kicks’ Division 3 athletes are wearing the sneakers on court.

After just one season, White said she is getting positive feedback about fit, with customers also reporting reduced joint and back pain.

“We want more players and female hoopers in sneakers that fit their feet and allow them to perform at their highest level,” she said.

Bucks vs Bulls prediction: Bet against Chicago on no rest

nypost.com - 4 months ago
After a Thursday night road game against the Atlanta Hawks, the Bulls will host Giannis Antetokounmpo and the Bucks, who are well-rested.
Read More

nypost.com - 2 years ago
President Trump’s reelection campaign is taking over YouTube’s homepage for 24 hours on Tuesday to showcase the administration’s accomplishments one week before Election Day. Team Trump launched a seven-figure ad buy on the video-sharing site that include
Read More
More News & Articles