Doc shocked to find money up patient’s butt: ‘FDR’s face staring at me!’

"I had never seen anything like it and the patient had no recollection of swallowing it," said Dr. Benjamin Schmidt.
Author: Ben Cost
Published: 2022-05-20 11:56 am 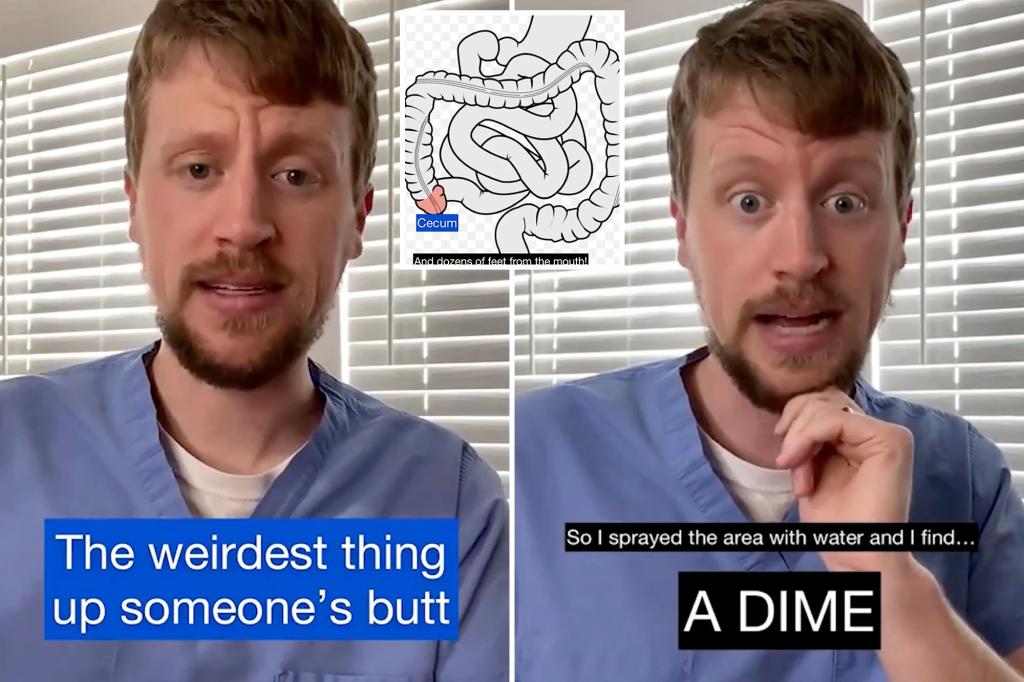 A Missouri doctor redefined bumming money after finding a dime impossibly lodged “way up” a patient’s bottom during a rectal exam.

Gastroenterologist Dr. Benjamin Schmidt’s TikTok clip detailing the mishap was first posted in the fall — but has now amassed 1.2 million views as gawkers wonder how the coin was deposited in his patient’s caboose.

“I had never seen anything like it and the patient had no recollection of swallowing it,” said Schmidt, 34, of the man’s inadvertent backdoor banking. “Videos about objects found in patients’ rectums certainly trigger a lot of shock — but I think this video did particularly well due to the level of mystery.”

The St. Louis-based physician — known as @docschmidt on TikTok — frequently shares videos of his wacky medical experiences for his nearly 440,000 followers on the platform.

However, Schmidt said nothing compared to seeing “FDR’s face staring back at me!” while conducting a colonoscopy on a patient with a history of colon cancer.

“He needed a routine followup procedure to make sure the cancer hadn’t come back,” the gastrointestinal expert described in the clip, cleverly captioned “that’s just my ten cents.”

Fortunately, the patient appeared to be cancer-free. However, Schmidt grew alarmed after spotting something silver in the man’s cecum, the furthest part of the colon from the anus.

The astonished doctor added, “So I sprayed the area with water, and I find a dime.” The medical practitioner was especially flummoxed by the find as the human juke box claimed “he’d never swallowed a dime before.”

In others words, it’s unclear whether he put his money where his mouth is.

It was equally unlikely that the poor soul put the bit in his butt given that it was found a whopping 5 feet from the anus, per the clip.

“We really don’t know how the dime got there!” Schmidt exclaimed.

Fortunately, Schmidt was able to relieve the man of his spare change using a “net tool,” per the video. After the patient awoke from the anesthesia, the GI gave him the dime as a souvenir and sent him on his way.

Needless to say, the TikTok commentariat had a field day with the patient’s money troubles.

“He swallowed a penny a few years ago and ya know . . . inflation,” quipped one jokester, while another wrote, “Maybe he swallowed a quarter and was making change.”

“Am I the only one who wants to know what year it was from?” wondered one viewer.

One paranoid poster commented, “I swallowed a nickel as a kid and I was never worried about it . . . UNTIL NOW.”

In retrospect, Schmidt is glad he was able to share the insane saga with his followers. The TikDoc said, “This video was hugely popular, I think many videos of unusual medical cases and findings do well because of the natural curiosity of humans.”

Schmidt recalled another hilarious discovery that he made while “examining a patient’s penis due to reports of painful urination.”

“What I first thought was a concerning black spot was actually a distorted scorpion tattoo he had gotten years earlier,” Schmidt said. “Ultimately, I love to educate and being able to make a lasting impact on people, sometimes in a completely different country, is amazing.”

This isn’t the first time someone has gotten a strange item stuck in an unlikely place. In March, doctors diagnosed a Tunisian woman with a urinary tract infection, only to discover that she had a shot glass lodged in her bladder. She had reportedly used the drinking vessel as a sex toy four years ago and didn’t get it checked out until much later.

nypost.com - 2 years ago
Not once. Twice. That’s how many times in the first half Sunday that the Giants came away scoreless inside the 10-yard line, failures that erased at least six points in a critical 20-6 loss to the Browns at MetLife Stadium. Joe Judge justified his coachin
Read More

nypost.com - 4 months ago
"I find there's so much chaos out in the world that when I come home I want it to be really quiet and I want everything to feel calming," she said of her strikingly sparse space.
Read More

nypost.com - 1 year ago
An alleged Capitol rioter was caught after an acquaintance spotted an image of him inside the US Capitol building -- in a New York Post Twitter post, federal authorities said.
Read More
More News & Articles