Andrew Abdullah, 25, turned himself in at the 5th Precinct in Chinatown after negotiating his surrender through a Brooklyn pastor -- arriving at the stationhouse with the minister in a Rolls Royce.
Author: Joe Marino, Tina Moore, Jorge Fitz-Gibbon
Published: 2022-05-24 01:52 pm 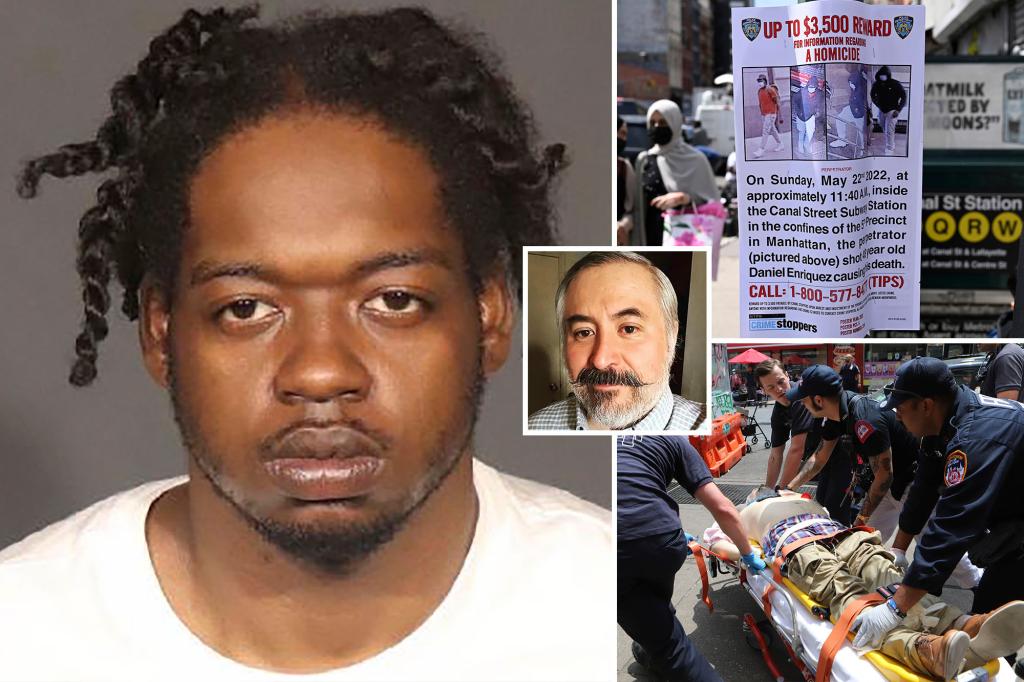 Andrew Abdullah, 25, turned himself in at the 5th Precinct in Chinatown after negotiating his surrender through a Brooklyn pastor — arriving at the stationhouse with the minister in a Rolls Royce, sources told The Post.

Abdullah had been on the lam since the Sunday-morning shooting on the last car of the train.

His surrender came after the NYPD officially identified him as a suspect in the case.

Abdullah was initially identified as a person of interest in the random and unprovoked shooting of Enriquez Sunday morning, according to police sources, who now say that he is the suspect in the shooting.

Police said the gunman paced back and forth on the last car of the train before he pulled a gun and shot Enriquez once in the chest.

He was rushed to Bellevue Hospital, where he was pronounced dead, police said.

In the wake of the senseless shooting, Enriquez’s family lashed out at City Hall over runaway violence in five boroughs and the Big Apple transit system.

“I wish you guys would go back to Mayor Adams and tell him the city is not safe,” the dead man’s sister, Griselda Vile, told The Post. “My brother just became a statistic on the way to the city. He was shot at close range.”

Abdullah, who has at least 19 arrests in more than a dozen incidents since 2015, fled the Canal Street station after the shooting and had been the subject of a police manhunt.

Enriquez’s live-in partner, Adam Pollack, told The Post Monday that he had only recently started taking the subway to work due to a surge in Uber pricing.

Pollack, 54, said his partner of 18 years typically traveled to his job at Morgan Stanley four days a week and liked to venture into Manhattan on Sundays for brunch and to shoot pool with friends at a local watering hole.

“He was going to brunch,” he said of Enriquez. It’s just so random.”

Police released surveillance photos of the gunman following the shooting.

The killer fled the scene after the 11:42 a.m. incident, handing the murder weapon off to a homeless man when he reached Centre Street before running off.

Cops said the homeless man then sold the weapon to another vagrant in exchange for $10 worth of crack cocaine — with that man then turning the gun over to police.

On Tuesday police sources said tests on that gun positively identified it as the weapon that killed Enriquez on the subway train.

Also on Tuesday Abdullah reached out to police through a Brooklyn pastor to attempt to negotiate his surrender, sources told The Post.

nypost.com - 2 years ago
The Giants offensive line showed toughness. Improvement is what’s needed most. Playing as the underdog in a matchup billed as a first-round knockout for the Rams defensive line, the offensive line allowed five sacks (a sixth was negated by penalty) and wa
Read More

nypost.com - 1 month ago
Video captured the moment a passenger and a United Airlines employee squared off at Newark Airport – where the worker appeared to hit the man, who then knocked him to the ground.
Read More

No reason to fear Larry Elder and other commentary

nypost.com - 5 months ago
NHL Hall of Famer and Islanders legend Clark Gillies died aged 67 Friday night, the team announced. There was no immediate cause given.
Read More
More News & Articles