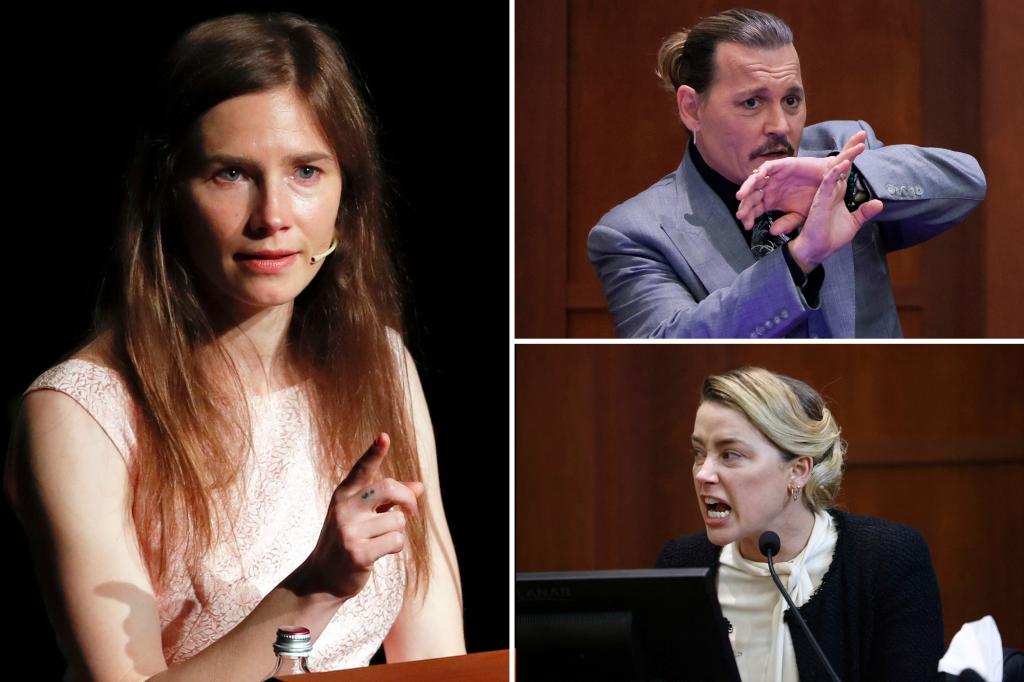 Amanda Knox weighed in on Johnny Depp’s defamation suit against Amber Heard, writing on Tuesday that the trial-turned-“spectacle” has no winners — and saying she feels sympathy for the doomed couple.

“Who wins in a trial like this? Not Depp. Not Heard. Not us,” Knox wrote in an essay in The Independent.

Knox — who spent four years in an Italian prison after being wrongfully convicted of the 2007 murder of British student Meredith Kercher — said she knows “what it’s like to have the public decide you’re guilty.”

“I am still dealing with the psychological trauma of the public shaming I’ve endured. It’s no small thing” she wrote.

Knox spoke out to support Depp after he lost his 2020 UK libel case against the The Sun, “not because I knew he was innocent of abuse, but because … he was being punished by the court of public opinion without a guarantee for proportional sentencing or a right to appeal.”

After watching the Fairfax, Virginia trial, Knox said she feels sympathy for Heard too, saying: “there’s a special kind of rancor that is directed at women.

“The more credible evidence that has emerged in Heard’s favor, the more violent the rhetoric against her has become.”

Then, referencing an exclusive report by The Post in April that two Depp supporters were kicked out of court for allegedly making threats against Heard, Knox wrote that “the death threats are not just online.”

“As someone who’s received plenty of death threats, I can tell you that, while it’s a fairly safe assumption that most are empty rhetoric fueled by rageful echo chambers, misinformation, and anonymity, you never know. And that slim chance is terrifying,” she said.

Depp, 58, is suing Heard, 36, for defamation after she wrote in a 2018 Washington Post op-ed that in which she called herself a “public figure representing domestic violence.”

Heard, 36, then countersued him for $100 million, saying he defamed her when he and his lawyer Adam Waldman made statements to the press in 2020 that she had manufactured allegations of abuse.

Knox, 34, wouldn’t say her “opinion” on the trial, but ended her op-ed by warning readers are turning a legal battle into gossip-filled entertainment.

“No one, not even the privileged and wealthy, should have to face such unforgiving and unaccountable judgment.”

nypost.com - 5 months ago
There’s more than enough evidence that social media is toxic by design, that Mark Zuckerberg is a psychopath, that online-induced suicides are regarded as little more than collateral damage.
Read More

The two players Yankees should trade for right now: Sherman

nypost.com - 11 months ago
This duo is more than a couple of players that could help the Yankees right now. They're also symbols of the direction they should head.
Read More

Jets building around Trevor Lawrence is as vital as drafting him

nypost.com - 2 years ago
The Jets fell to 0-10 Sunday with their 34-28 loss to the Chargers in Los Angeles. Here are some thoughts and observations from the game: 1. The Jets have been eliminated from the playoffs in our minds for months, but it became official on Sunday when the
Read More

Flying through San Juan? There are new luxe reasons to stop and stay