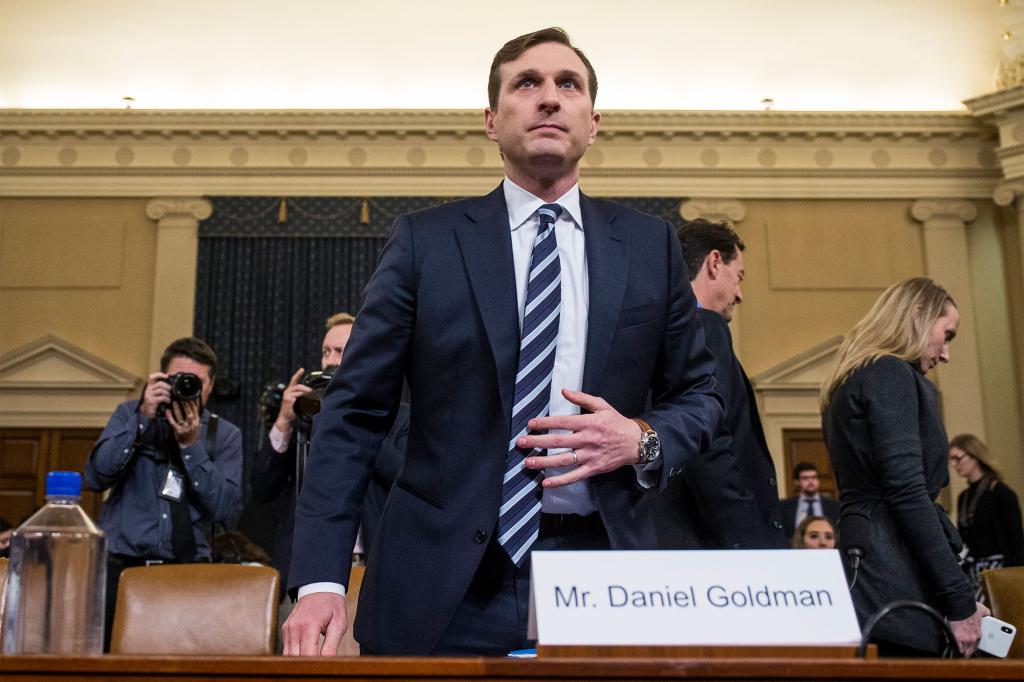 Daniel Goldman, the chief Democratic House Intelligence Committee lawyer during the first impeachment trial of Trump, is expected to announce a run for the seat, Axios reported Tuesday.

Goldman, who lives in the district and was rumored to be eyeing a run for weeks, ran for New York attorney general last year, but dropped out after incumbent Attorney General Letitia James announced she would run again.

The former assistant US attorney took center stage back in 2019 as the Democrats’ lead counsel during Trump’s impeachment investigation.

He previously worked as a federal prosecutor in New York, where he took down Mafia bosses and corrupt Wall Street executives before joining Congress as general counsel for the House Intelligence Committee in early 2019.

The NY-10 district was left up for grabs when incumbent Rep. Jerrold Nadler announced he would vacate the seat when his Upper West Side neighborhood was cut out of it. Instead, the veteran congressman will run against former longtime ally and fellow Democrat Rep. Carolyn Maloney in her newly redrawn 12th District, which now includes Nadler’s address.

The Post reported last week that Jones, who currently reps the 17th Congressional district, said House Speaker Nancy Pelosi had made phone calls to discourage Goldman from entering the race, according to Democratic sources.

Goldman’s camp did not deny Jones’ claim that Pelosi spoke to him about the primary race and favored Jones.

“As the lead counsel of the House’s first impeachment of Donald Trump, Dan Goldman talks frequently with members of Congress. He does not share those conversations publicly,” a source close to Goldman previously told The Post.

A spokesperson for Pelosi said that she has yet to make any endorsements in the race and hasn’t discouraged anyone from running.

nypost.com - 11 months ago
President Biden had told Jewish leaders that he remembered "spending time at" and "going to" the Tree of Life, but the synagogue told The Post he never visited there.
Read More

nypost.com - 2 years ago
The former GM in Mike Tannenbaum believes Joe Douglas was both happy the Jets finally won their first game last Sunday against the Rams and aware that the victory probably cost him the opportunity to draft blue-chip Clemson quarterback Trevor Lawrence.
Read More

nypost.com - 1 year ago
Like legislatures in numerous states, Texas Republicans are introducing a barrage of bills intended to tighten election laws in the Lone Star State following the 2020 presidential election, according to reports. ​ And Texas Gov. Greg Abbott confirmed he
Read More

TikTok star Clinton Kane robbed at gunpoint: ‘I was peeing my pants’

nypost.com - 10 months ago
He almost had a very different kind of livestream. Australian TikTok star says no one was injured but thieves made off with $30,000 worth of equipment.
Read More
More News & Articles