A Welsh runner beat a horse in 22-mile-long race

Consider it a good day for the human race. Last week, in Wales, in the United Kingdom, a man competed against a horse, for a 22-mile-long race, and won! Indeed, for the first time in 15 an actual human came out on top in the annual Man v Horse race. The
Author: Michael Kaplan
Published: 2022-06-24 05:37 pm 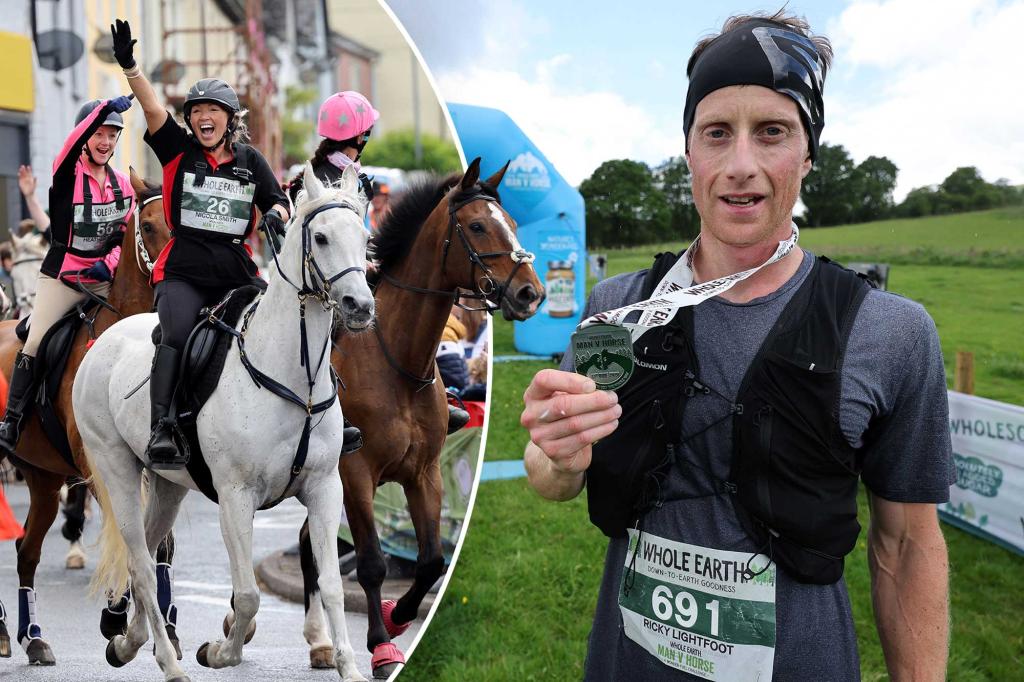 Consider it a good day for the human race.

Last week, in Wales, in the United Kingdom, a man competed against a horse, for a 22-mile-long race, and won! Indeed, for the first time in 15 an actual human came out on top in the annual Man v Horse race. The winner, Ricky Lightfoot, was one of 1,200 runners competing against 60 horses and jockeys. He completed the course in two hours and 22 minutes. Finishing second, at two-minutes and one-second less, was the horse Lane House Boy, who rode with jockey Kim Alman riding on his back.

Lightfoot, a 37-year-old firefighter from Northwest England, is the third person to ever beat a horse in this race, which dates back to the 1980s. The event is rooted in a wager made between patrons at a Welsh pub called Neaudd Arms. The patrons’ challenge: Would one of them be able to outrun a horse? The town decided to find out and the race turned into a local tradition, with the pub serving as the official start point.

Though Lightfoot is a seasoned long-distance runner, he did not come to this year’s Man v. Horse particularly prepared to win. “I was awake for 29 hours before the race,” he told CNN. “Needless to say, I was shattered. But it was worth it.”

In speaking with Runners World, he said that his “head was everywhere” before he took off. “I wasn’t nervous but wasn’t particularly focused on the race. I was just kind of listening in to conversations around me and there were lots of people pretty pumped up for it.”

Lightfoot said he expected his human competition to be keen — and his far sleeker, four-legged opponents to be even faster. “But,” he said, “within [the first quarter mile] everyone else slowed down and I maintained a lead throughout. I worked hard, but it felt more like a training run than an actual race.”

As the race progressed, Lightfoot became a fan favorite. According Lightfoot’s Instagram, he received comments from spectators, such as, “You’ve got the f–king horse by the balls. Go on, lad!”

As for the prize money, Lightfoot benefited from the fact that no other humans had outrun the horses for a 15-year-long stretch. Every year 500-pounds is placed into the prize pool and builds until a human aces the race. For his trouble, Lightfoot took home 3,500-pounds (which converts to $4,292).

Lightfoot has been running marathons since the age of 14, and he found this one to be particularly special. “The support was amazing,” he told Runners World. And, he added, “there aren’t many races where you can race a horse.”

Trump blasts Pence for calling him ‘wrong,’ for suggesting VP could overturn election

nypost.com - 6 months ago
Trump bashed his vice president ahead of the Capitol Hill riot for not having the “courage” to reject certified electors from Arizona, Georgia and Pennsylvania for then-President-elect Joe Biden.
Read More

This summer, turn off your screens and boldly go out into the real world

nypost.com - 1 year ago
In the early days of the pandemic, I wrote with gratitude about our screens, which kept us connected when things were locked down.
Read More

nypost.com - 9 months ago
Andrew Cuomo had something to celebrate on Sunday even as his criminal sexual assault charge looms over him — his dog's special day.
Read More
More News & Articles