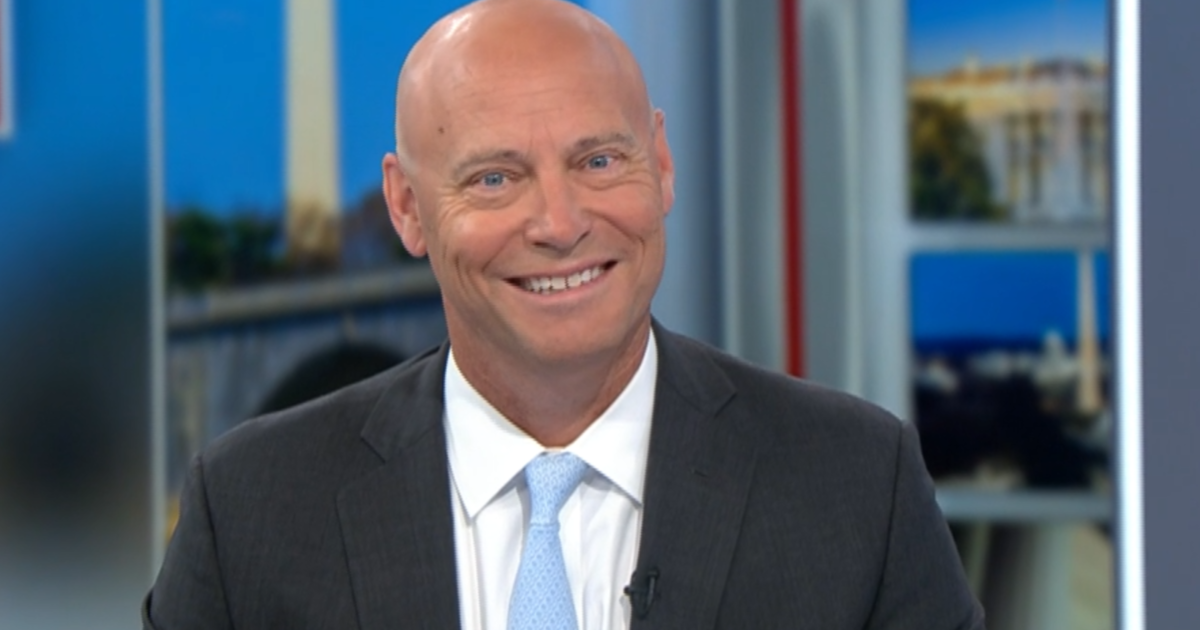 The following is a transcript of an interview with former Vice President Mike Pence's chief of staff Marc Short that aired Sunday, June 26, 2022, on "Face the Nation."

MARGARET BRENNAN: We're joined now by Marc Short, he was Former Vice President's- Vice President Pence's Chief of Staff. Good morning to you, Marc. Good to have you here.

MARGARET BRENNAN: We've been hearing a lot about you. I'm glad you're here. You were with the former Vice President on January 6, when he sheltered and when he ultimately went ahead and certified the election results that day. Is he watching these hearings, and why is he dragging out that decision on whether to cooperate?

SHORT: Oh, I don't know that I'd say he's dragging out a decision on that, Margaret. I think as far as the question of, 'Is he watching?' I think we all lived it and- and I don't think that, probably, I don't think he's waiting with bated breath and watching these hearings in the same extent that perhaps some inside the beltway are. Last week, for instance, is the hearings were going on. He was out campaigning in Illinois for Darren LaHood and Esther Joy King. He was campaigning for Steve Chabot. He was up in New York campaigning for Lee Zeldin. He's trying to make sure Republicans have a great midterm cycle. And that's where his focus is looking to the future, and not re-litigating the past. So Congressman Aguilar should not expect the former vice president to come speak to the committee. I'm gonna leave that conversation to the Vice President, his counsel to answer that, Margaret, but I think it would be incredibly unprecedented. And I think it would, it's also I think, conversations between a president- vice president that there is a separation of powers that should be respected. And let's keep in mind that there is currently a former vice president who occupies the Oval Office. Do you want Congress to be able to drag up former vice presidents for certain subpoenas or for certain testimony? I think it could create a terrible precedent for sure--

MARGARET BRENNAN: This has never happened before in history. I mean, this is incredible. You lived it, as you say.

SHORT: We did live it, and Margaret, I think that both myself, and as you know, the chief counsel had been under subpoena have testified for many hours. And so we've told I think the story of what the Vice President's team witnessed and saw.

MARGARET BRENNAN: Let's ask- I want to ask you about the team, Former Trump, Chief of Staff, Mark Meadows your counterpart, his name comes up again, and again, you just heard the Congressman mention it too. The Acting Attorney General testified just a few days ago that it was Meadows who was distributing this bizarre conspiracy theory about Italian satellites. I mean, he was sending gifts or wanted to- to Georgia state election officials, how complicit was he in this lie?

SHORT: You know, Margaret, I think that Mark would often say to me that he was working to try and get the President to concede and accept the results of the election. And at the same time, it was clear he was bringing in lots of other people into the White House that were feeding the president different conspiracy theories. I think that Mark was telling different audiences, all sorts of different stories. And so I think, as I've said, on many occasions, I believe the President was very poorly served by the team that he had around him. And I think that they fed him many conspiracy theories about the events that conspired on election day, and then the follow-up.

MARGARET BRENNAN: But there were individuals who stood up to the President and said, That's not true. That's false. That's unconstitutional. That's illegal. The Vice President was one of them. Mark Meadows did not.

SHORT: I think the Vice President's been a consistent constitutional conservative his whole life. And I think that, you know, I think we're all proud of the way that he handled that day.

MARGARET BRENNAN: I want to ask you about abortion in a moment, but just here on this topic, the January 6 committee revealed this week that the Chief of Staff for Senator Ron Johnson of Wisconsin was trying to pass along fake electors to the Vice President to right before he was set to certify the election. Were you aware of this scheme? Was the senator directly involved?

SHORT: I have no reason to believe that the senator was directly involved. I know that Chris Hodge, and our director of legislative affairs shared with me that in texts they came in and- and I'd said to Chris responded not to deliver that to the Vice President, because what we've learned when we sat down with the parliamentarian, Margaret, is it honestly, this happens, every cycle, that members send in separate fake sets of electors, every time, every four years. But, they come into the archives of the parliamentarian, and they dismiss them. If they're not certified, it's kind of meaningless.

MARGARET BRENNAN: But are you saying what Ron Johnson's staff was doing was totally kosher?

SHORT: No, no, no, I didn't say that, Margaret. I said that what happens is that individuals across the country can send in their own set; they do it all the time. It means nothing, though, unless the state has certified it.

MARGARET BRENNAN: So the Senator's staff

SHORT: And so we intentionally were like, No, there's no interest in seeing a separate set that has not been certified by the state of Wisconsin.

MARGARET BRENNAN: But wasn't that troubling to you? I mean, this isn't just someone randomly sending it in the mail.

SHORT: I think it was clear at that point of where we were in this that there were other electors that were being submitted. So I can't say that it was necessarily shocking at that stage of events.

MARGARET BRENNAN: Was he the only one who tried to do this?

SHORT: I don't know of any other member of Congress, or staff that tried to know, but I have no reason to know that Ron Johnson was, was behind that or not, it was a staff-to-staff conversation.

SHORT: There were a lot of incredible things that happened around that day.

MARGARET BRENNAN: Yes, and we could talk for the next hour, Marc, about that day. I want to ask you as well, though, about the Former Vice President who as you mentioned has been out there on the campaign trail. One of the things that Mike Pence is known for is being a staunch opponent of abortion, and very much pro-life. You played such a key role in getting these three Supreme Court justices on the court, who did vote to overturn Roe versus Wade, this conservative majority, directly linked to the administration you served in. You are now talking about, the Vice President- the Former Vice President, a ban on abortion. So going further than where we are right now. What does a ban on abortion look like?

SHORT: Well, I think that the Vice President has been championing life since the very beginning of his public career. And I think he was one of the ones in Congress, as you know, who advocated for pro-life position and advocated for ending of tax- funding for abortion.

SHORT: I think that where we believe that life begins at conception, I think the Vice President's always accepted exceptions for rape and incest because he believes that we should continue to move forward toward a- a more perfect union that includes the protection of life. I mean, Margaret

MARGARET BRENNAN: What about like what Governor Youngkin's doing in Virginia, 15 weeks, is there a room for compromise, like that?

SHORT: Margaret, I think that we're going to continue to champion life wherever we can. And if that means that- that you're able to extend that more protections for- for unborn children, we're going to advocate for that. I think it's important to keep in mind that there never was- there never was anything that justices could revert to say, in Roe v. Wade, there was a protection or a certain right for women to afford an abortion. Even Ruth Bader Ginsburg herself —

MARGARET BRENNAN: Right, she did –

SHORT: said it was- it was highly unusual for them to have such judicial activism in the case of Roe v. Wade.

MARGARET BRENNAN: Do you oppose the kind of surveillance, and punitive action against women?

SHORT: Conservative are always better when we're speaking from a position of compassion than condemnation. And so we should be acknowledging that there are multiple victims in abortion, not just the child, but also the mother and we should be looking to provide those women with the care and services that they need.

MARGARET BRENNAN: Marc Short, good to have you here.

SHORT: Margaret, thanks for having me.

MARGARET BRENNAN: We'll be back in a moment.

www.cbsnews.com - 1 year ago
Egypt and Sudan are raising concerns to the United Nations Security Council about a massive hydropower dam just south of Sudan's border in Ethiopia. The Grand Ethiopian Renaissance Dam sits on the Blue Nile river in the western part of the country. Egypt
Read More

www.cbsnews.com - 1 year ago
Twenty-six-year-old Jonathan Tran of California appeared in court accused of hopping onto the White House grounds. According to Washington, D.C., police, he claimed to be "a friend" of the president and that he had "an appointment." He was carrying two
Read More

www.cbsnews.com - 3 months ago
When LeBron James walked into the I Promise School in Akron, Ohio, the kids went wild.
Read More

www.cbsnews.com - 11 months ago
People craving nature after being cooped up during the pandemic are being stymied by raging wildfires.
Read More
More News & Articles