After abortion, how is the Supreme Court likely to change American society next?
Author: David Leonhardt
Published: 2022-06-27 06:32 am 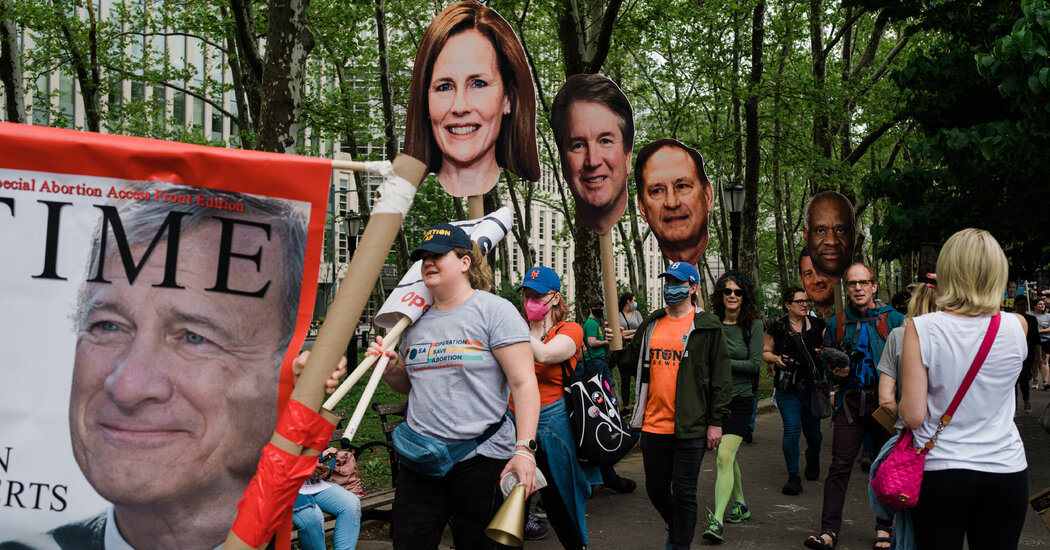 They have largely rejected Roberts’s more cautious approach of deciding cases narrowly and shifting the law slowly. The five instead prefer to set American law as they believe it should be set, even when they must overrule longstanding precedent. To do otherwise, they believe, is dishonest.

After the court overturned Roe v. Wade on Friday, one obvious question was: What other legal changes might soon be coming? Initial attention has focused on the possibility that the court may soon restrict L.G.B.T. rights, contraception access or interracial marriage. All those issues involve some of the same logic that led to the abortion decision, as both Justice Clarence Thomas and the three liberal justices pointed out in their writings accompanying the decision.

But those are not actually the hot-button issues that the court is likely to consider next. In today’s newsletter, I want to focus on the divisive decisions that are more likely to come soon. One of those rulings could happen today; the court is scheduled to announce some of its final rulings of the term shortly after 10 a.m. Eastern.

The first reason to doubt that the court is on the verge of overturning the constitutional right to same-sex marriage, interracial marriage or contraception access comes straight from Friday’s abortion ruling. In a separate concurrence explaining his vote, Justice Brett Kavanaugh — one of the impatient, ambitious five — explicitly signaled that those other rights were safe.

In his 12-page concurrence, Kavanaugh wrote that he wanted to address “how this decision will affect other precedents involving issues such as contraception and marriage.” He then listed four cases dealing with those issues, including the 2015 ruling establishing a right to same-sex marriage. “Overruling Roe does not mean the overruling of those precedents, and does not threaten or cast doubt on those precedents,” Kavanaugh explained.

Unless Kavanaugh changes his mind — or Roberts decides to overturn those precedents — there is no majority to do so. For now, only Thomas has said that he favors revisiting the earlier cases. “I don’t think there are five votes for overturning any of those decisions,” Adam Liptak said on a weekend episode of “The Daily.”

The second reason to think that other divisive issues will come first is that the court has already announced many of the cases it will hear next year. They tend to involve other topics — namely affirmative action, election laws and business regulation.

It’s an issue that seems likely to define the court’s next term in the way that abortion did this term. The court has agreed to hear two cases, one challenging the use of race in admissions at a public university (the University of North Carolina) and one at a private university (Harvard).

I have been writing about this subject for the past two decades, and university officials I’ve spoken with are far more worried that the court will outlaw their current admissions approach than they were during the run-up to previous Supreme Court cases. If that happens, the number of Black students at selective colleges seems especially likely to decline.

The core argument for affirmative action is simple: In a society where racism and racial inequities remain defining problems, ignoring race in admissions or hiring decisions is fundamentally unfair.

Yet affirmative action — at least as it has typically been practiced in the U.S. — tends to be unpopular. When the policy appears on the ballot in state referendums, it usually loses, even in liberal states like California. (Poll questions, depending on their wording, point in contradictory directions.)

One problem may be that traditional affirmative action has put nearly all of its focus on race, with little to no weight on economic class. That approach has probably hurt the policy’s support among many white, Asian and even Latino voters. Its thin popular support, in turn, would make it easier for conservative justices to ban a policy they have long opposed.

Is there any chance the court will stop short of outlawing affirmative action? Sure. Many corporate executives and military leaders support the policy, and they could plausibly sway the justices. But most court watchers consider that outcome improbable.

In a 2003 ruling upholding affirmative action, Justice Sandra Day O’Connor — a more moderate Republican appointee — suggested that she thought the policy might no longer be necessary “25 years from now.” If the court scraps the policy in 2023, the current impatient, ambitious majority would be only five years ahead of O’Connor’s timetable.

Two other contentious subjects on the court’s docket are election law and business regulation. On both, the court — including Roberts — has recently leaned strongly to the political right.

Election laws. The court has already agreed to hear a case about whether Alabama can draw a congressional map that packs many Black voters into a single congressional district, effectively diluting their political power. About 27 percent of Alabama’s residents are Black, and the state has seven House districts.

The court may also decide to hear a case that could limit the ability of state courts to review how state legislatures draw districts and otherwise oversee elections. Adam Liptak recently wrote an article that explains why the issue is so important — especially when many Republican legislators have signaled a willingness to overturn election results.

Business regulation. Even before President Donald Trump’s three appointees shifted the court to the right, it tended to take a laissez-faire approach, limiting Congress’s ability to regulate corporate behavior. The current court may go even further, especially on climate policy, and rule that federal agencies cannot limit pollution unless Congress has given them specific authority to do so.

The court will hear one case involving the Clean Water Act in October and will likely issue a ruling involving the E.P.A. this week. I’ll go into more detail on this subject once that ruling is announced.

China’s economic expansion is winning over small countries that the U.S. ignores, writes Dorothy Wickham, a journalist from the Solomon Islands.

Advertising has become easier to avoid, thanks to commercial-free streaming services, skippable YouTube ads and more. Companies and marketers are responding with an increase in product placement.

When done well, a bit of product placement can seem natural; after all, real kitchens are stocked with branded products. But the repeated appearance of certain items can start to look odd. Why is it that so many TV characters are drinking that one blue-capped water? And why do they keep referring to the same real estate app?

Read more about the trend — including examples from your favorite shows.

www.nytimes.com - 2 years ago
The Houston Rockets’ two stars want out, but the market for Westbrook is lukewarm and dependent on what happens with James Harden. Plus: the latest on LaMelo Ball and the N.B.A. draft.
Read More

www.nytimes.com - 11 months ago
Every month, the streaming service adds a new batch of titles to its library. Here are our picks for September.
Read More

www.nytimes.com - 2 years ago
Statistical gaps can make it difficult to properly allocate public resources to Native Americans. When that’s the case, one leader said, “tribal nations have an effective death sentence.”
Read More

www.nytimes.com - 2 years ago
The mothballing adds another possible factor in the crash of the 26-year-old Boeing 737-500, which killed 62 people on Sriwijaya Air Flight 182.
Read More
More News & Articles