Shohei Ohtani extended his scoreless streak to 21²/₃ innings while pitching five-hit ball into the sixth with 11 strikeouts in the Angels' 4-1 win.
Author: Associated Press
Published: 2022-06-30 02:29 am 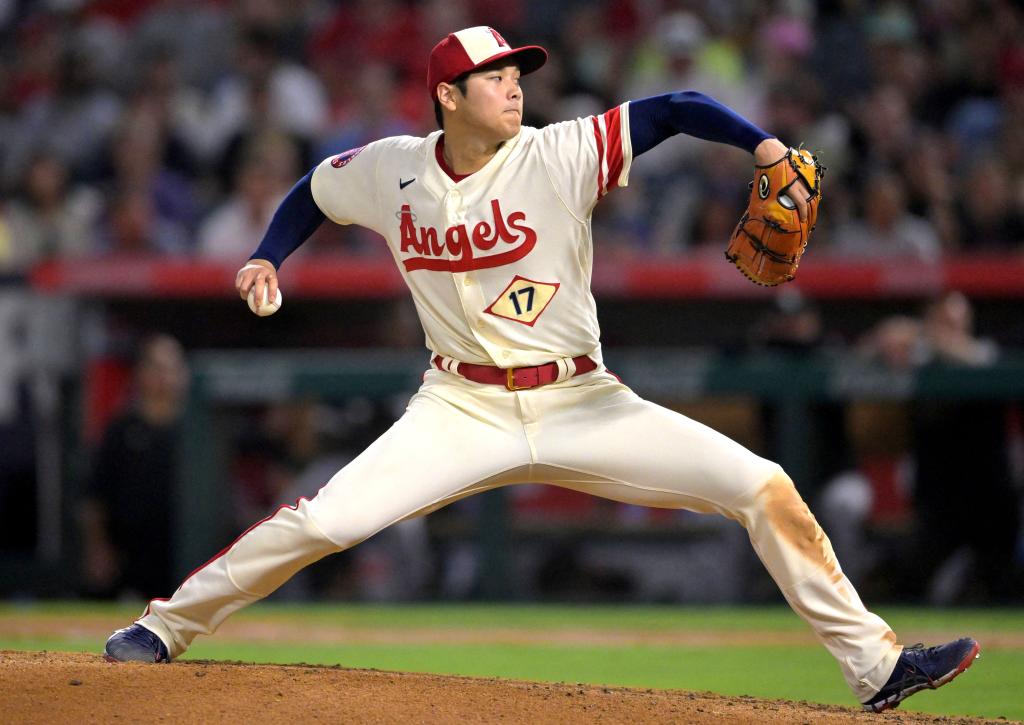 ANAHEIM, Calif. — Whether Shohei Ohtani is unleashing his 101 mph fastball or dispensing his large array of breaking balls, the Angels’ two-way ace has overpowered every opponent during his shutout surge through June.

Ohtani still had to dig deep into his nearly bottomless bag of pitches to beat the White Sox.

The right-hander extended his scoreless streak to 21²/₃ innings while pitching five-hit ball into the sixth with 11 strikeouts in Los Angeles’ 4-1 victory over Chicago on Wednesday night.

“This one was huge for us because we wanted to win the series, and it’s going to lead to better stuff down the road,” Ohtani said through a translator after winning his fourth consecutive start.

Ohtani (7-4) yielded five singles and a walk, and the White Sox had to work for every small success against him. The reigning AL MVP hasn’t allowed a run since the fifth inning of his brilliant seven-inning outing in Boston on June 9, giving him an 0.34 ERA in his last four starts with 36 strikeouts — 24 in the last two games.

“(The slider) was working really well for me, especially early in the game,” Ohtani said. “I think they started to catch onto the softer stuff later, so I mixed in more fastballs. Just going with the flow.”

Translator Ippei Mizuhara says this matter-of-factly, but Ohtani’s array of pitches is maddening for opponents and eye-popping to his teammates.

Sign up for Starting Lineup for the biggest stories.

“He’s got six, seven, eight pitches, and he can change speed on all of them,” said his catcher, Max Stassi. “It’s special what he can do and how he can manipulate it. … You never know what you’re going to get. It’s the kitchen sink coming at you all the time.”

Ohtani went 0 for 3 with a walk at the plate, but Luis Rengifo hit a two-run homer and Mike Trout had an early RBI double as the Angels finished their disappointing 4-5 homestand on a positive note because of their superstar’s work on the mound.

Michael Kopech (2-5) yielded five hits and two walks over 5¹/₃ innings for the White Sox, who have lost six of eight. Chicago loaded the bases in the fourth, but couldn’t capitalize.

“We didn’t put the ball in play enough,” manager Tony La Russa said. “We had a real good shot in the fourth. I thought we had good at-bats, (but Ohtani) has got weapons. He’s for real.”

Ohtani’s streak included scoreless efforts in victories over Seattle and Kansas City before this tough challenge against the White Sox, who pounded out 17 hits and 11 runs one night earlier. After he struck out a career-high 13 Royals last week, Ohtani reached double-digit strikeouts for the fifth time this season against Chicago.

He gave up two singles while racking up three strikeouts in the first inning, and the Angels scored moments later when Taylor Ward delivered a leadoff single and came around on Trout’s double. Trout then scored when Kopech made an error at first base while Chicago tried to turn a tricky 3-6-1 double play.

Ohtani escaped a bases-loaded jam in the fourth after allowing two more singles and a walk, striking out Josh Harrison with a slider. Ohtani also reached back for two fastballs over 100 mph during the inning.

Rengifo doubled Los Angeles’ lead and chased Kopech with his two-run shot into the ficus trees beyond center field in the sixth.

nypost.com - 6 months ago
Prince Andrew agreed to never deny again that he raped Virginia Roberts Giuffre — while his accuser has only been bound to silence for the next few months, according to a report.
Read More

Watch out, NY Democrats: Socialists gunning to double their ranks in Albany

nypost.com - 1 year ago
In a blunt discussion, Democratic Socialist elected officials were appalled after seeing how the Albany legislature operates -- and planned on running more socialists and oust moderate Democrats in the 2022 primary elections.
Read More

nypost.com - 1 year ago
Diary of disturbing disinformation and dangerous delusions: This Headline: France kept classrooms open ‘at all costs.’ At a school where 20 pupils lost loved ones, some say the price was too high We say: CNN must be in bed with the teachers unions. Its
Read More
More News & Articles