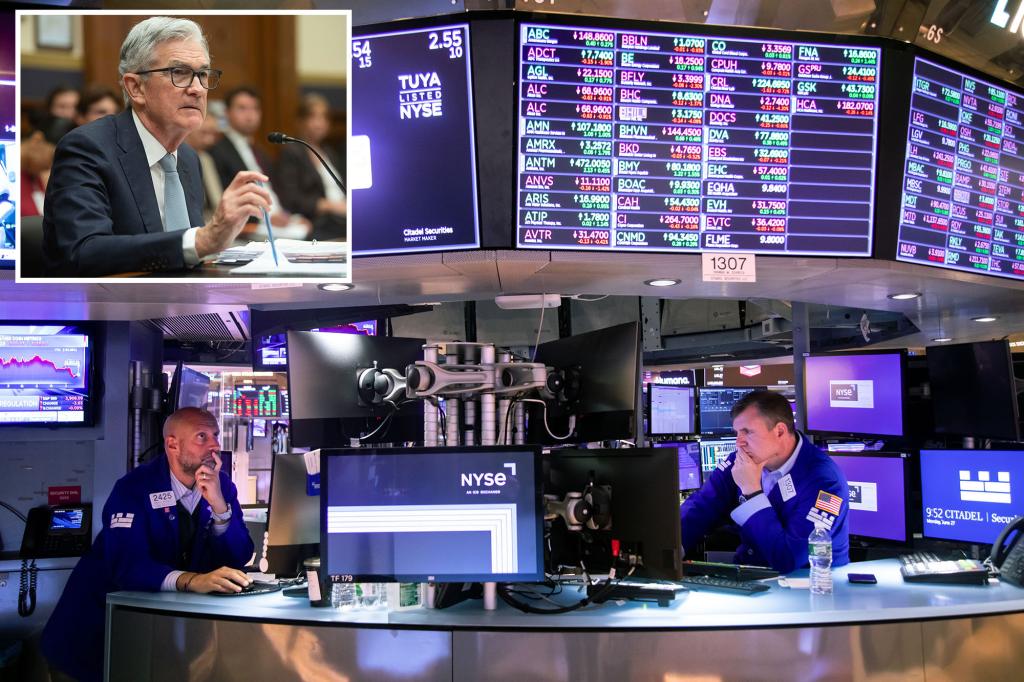 Stocks slid in midday trading Thursday as yet another decades-high inflation reading and signs of slowing consumer spending rattled investors, even as Federal Reserve Chair Jerome Powell admitted that the risk of a recession is growing.

The Dow Jones Industrial Average was down about 300 points, or about 1%, following the release of the fresh inflation data. The tech-heavy Nasdaq sank more than 180 points, or approximately 1.6%, while the broad-based S&P 500 declined about 40 points, or 1%.

The S&P 500 slipped into bear territory earlier this month – defined as a 20% decline from a recent high – and is pacing for its worst first-half performance since 1970, according to Reuters. The Nasdaq is tracking toward its steepest first-half declines on record.

The Personal Consumption Expenditures price index, the Fed’s preferred gauge for inflation, rose 6.3% in May, according to Commerce Department data released on Thursday. The reading showed that inflation remains a persistent threat to the economy, though it is showing signs of leveling off after a months-long surge.

“A lot of investors were expecting inflation data to really start to come down. But what we’re finding is that it’s a lot more challenging, and that the inflation data is remaining elevated for longer and probably has not peaked,” Sam Stovall, chief investment strategist at CFRA, told Reuters.

Consumer spending, a key input for US economic activity, rose just 0.2% in May, down from an increase of 0.6% the previous month. The increase was less than analysts expected and the smallest gain so far this year – a worrying sign as fears mount that the Fed will trigger a recession through its sharp interest rate hikes.

“The rising cost of living absorbed all of the increased spending power from added jobs and higher wages in May,” said Bill Adams, chief economist for Comerica Bank. “Americans are running faster just to stay even.”

Stocks turned lower one day after Powell warned that the Fed had little chance but to move aggressively with rate hikes as it scrambles to keep inflation from becoming entrenched in the broader economy.

Powell noted there was “certainly” a “risk” that the Fed’s actions would cause an economic slowdown.

Cryptocurrency prices continued their trend of selling off in tandem with stocks. Bitcoin briefly sank below $19,000 as investors reacted to looming economic uncertainty and concerns about a brewing liquidity crisis among major cryptocurrency firms.

The national average gas price hovered near $4.85 per gallon on Thursday, dropping below record highs ahead of the busy Fourth of July travel weekend. Oil prices also declined, with the West Texas Intermediate oil benchmark dropping 2.85% to about $106 per barrel.

nypost.com - 2 years ago
A pair of Portuguese lesbian lovers inspired by the Showtime ​serial killer ​TV series ​“Dexter” allegedly killed and hacked up a man, chopping off his fingers to access his bank account and steal a more than $77,000 inheritance. Maria Malveiro, 19, and
Read More

nypost.com - 1 year ago
Rosé may need to be crowned the new queen of 2000s pop, making big waves for the collaboration with fellow K-pop stars Onew of SHINee and Lee Suhyun of AKMU.
Read More

nypost.com - 2 months ago
Former President Trump and his die-hard allies raised $250 million off their claims the 2020 election was stolen -- but most of the funds went toward his newly created Save America PAC.
Read More
More News & Articles