Parents are re-reading last messages, swiping through photos, waiting for a phone call and praying.
Author:
Published: 2022-07-01 11:47 am 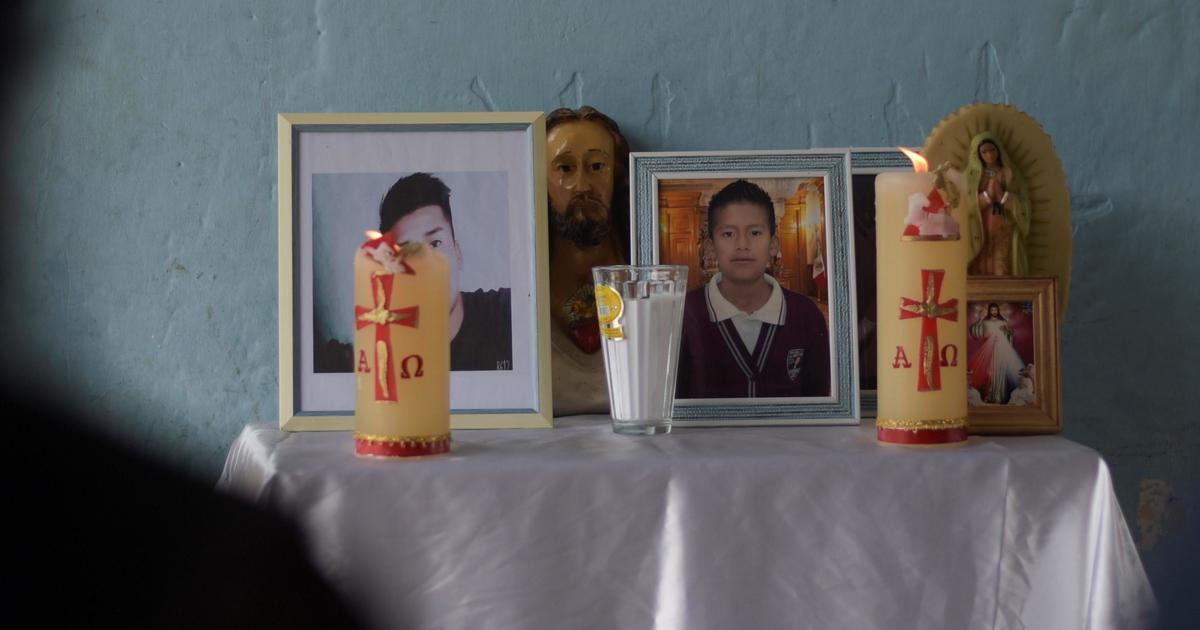 Clutching rosaries, residents of the mountain village of San Marcos Atexquilapan, Mexico stared at photographs of three of their own atop the altar at the local church, praying that teenagers Jair, Yovani and Misael were not among the 53 migrants who perished inside a stifling trailer in Texas.

The wait for confirmation has been agonizing for families from Mexico to Honduras. Now they hope for what before would have been dreaded -- capture by the Border Patrol, even hospitalization -- anything but the solemn finality that has been trickling out family by family across the region.

Then again, at least they would know. For now parents re-read last messages, swipe through photos, wait for a phone call and pray.

Not far from the church, outside the Olivares family's neat two-story homes -- each sister's and their parents' all in a row -- a black tarp was hung Thursday to shade the dozens of people who have come each day to be with the parents of teenage brothers Yovani and Jair Valencia Olivares and the mother and father of their cousin, 16-year-old Misael Olivares Monterde.

Such a covering is customary for wakes, when the family home cannot accommodate all those who come to pay their respects. But in this case it is a vigil where residents of the town of 3,000 come to buoy the family's spirits, praying and swapping stories about the boys.

Teófilo Valencia, father of 19-year-old Jair and 16-year-old Yovani sat looking at his phone, reading the last messages he received from them.

"Dad, now we're going to San Antonio," Yovani wrote at 11:16 a.m. Monday. A half-hour later, his brother wrote to their father that they were ready to work hard and pay for everything.

Hours later came the horrific discovery of the semitrailer abandoned beside railroad tracks on the outskirts of that south Texas city.

The cousins had left together June 21. Yolanda Olivares Ruiz, the brothers' mother, tucked Yovani's school certificate in his wallet as identification and stuffed three changes of clothes for each in backpacks, along with phone numbers of relatives in the U.S. and Mexico.

Hermelinda Monterde Jiménez spent the night before their departure talking with her son Misael. "He told me, ´'Mom, wake me up,' and for a moment I thought about not doing it so he wouldn't go," she said. "But it was his decision and his own dream."

Their parents took out loans, using their homes as collateral to cover the $10,000 smuggling fee for each cousin. They paid a portion up front and were scheduled to pay the rest after the boys arrived safely.

The youths wanted to work, save up money and return to open their own clothing and shoe store. They gave themselves four years.

By last Friday, June 24, they were in Laredo, Texas.

They told their parents that after the weekend they would be taken to their destination in Austin, where a cousin who had made the journey just months earlier awaited. In the past week, 20 some residents have departed the town for the United States.

The family did not hear of the ill-fated trailer until Tuesday. They tried to reach the boys, but the messages and calls didn't go through. They went that same day to government offices, providing whatever information could help in the search.

On Wednesday, Mexico's consul in San Antonio confirmed that residents of the Gulf coast state of Veracruz - in which San Marcos is located - were among the 27 Mexican victims. On Thursday, state lawyers traveled to San Antonio to assist in identifications.

Meanwhile, the Olivares wait and pray.

The wait ended Thursday for the family of Jazmín Nayarith Bueso Núñez in El Progreso, Honduras. Their prayers for her safe return were not answered. She was confirmed as being among the dead in San Antonio.

Bueso Núñez suffered from lupus, an immunological disease, that had cost her a job in an assembly plant and whose treatments were very costly, her family said.

A family friend had offered to help her travel to the United States, where she hoped to find better-paying work to help support the 15-year-old son she left with her parents and to find treatment for her disease.

Before leaving June 3, the 37-year-old told her father she intended to migrate.

He tried to talk her out of it, noting the dangers. "No, Dad, this is a special trip," she told him. "'I was there, daughter,' I tell her. 'There are no special trips.'" The only special trip was to travel by plane with a visa, he told her.

She was in Laredo when they last spoke. She told him the smugglers were going to take their phones before going on, so she wouldn't be able to communicate for a time.

On Thursday, a relative in the United States who had been helping the family provide identity documents to authorities told them the sad truth, said her brother Erick Josué Rodríguez.

"The economic situation, the social situation that exists in our country is very, very difficult," Rodríguez said. "It is the reason that we see day after day, month after month caravans, migrants. It's because people have dreams and don't have opportunities."

Back in San Marcos Atexquilapan, Mexico, sisters Hermelinda and Yolanda walked late Thursday from their homes to the church carrying photographs of their sons. They were flanked by women bearing candles.

Inside, the mothers sat in the first row while the priest asked those gathered to pray.

"It is not that they are criminals," he said. "They went in search of their daily bread."

The townspeople prayed: "We ask you for these boys to have the dream of a better life, give them that consolation, that relief wherever they are, Lord, that answers are given because these families are suffering, they have an anguished heart."

www.cbsnews.com - 6 months ago
As the threat of war between Russia and Ukraine looms, President Biden says he is open to meeting with Russian leader Vladimir Putin. But the U.S. says that offer will come off the table and Russia will pay a steep price if Russia invades Ukraine. CBS
Read More

Wine vineyards around the world feel the impact of climate change

www.cbsnews.com - 8 months ago
Global rising temperatures are shaking up much of the wine industry, from the grape's growth cycle to, in some cases, how wine tastes. For “60 Minutes,” Lesley Stahl travels from France to Great Britain to document how famous wine-growing regions, like
Read More

Women sue after cops handcuffed and held them at gunpoint