The teenager caught on camera attacking a police officer after getting busted jumping a turnstile at a Manhattan subway station shows the consequences of bail reform.
Author: Bob McManus
Published: 2022-07-26 08:57 pm 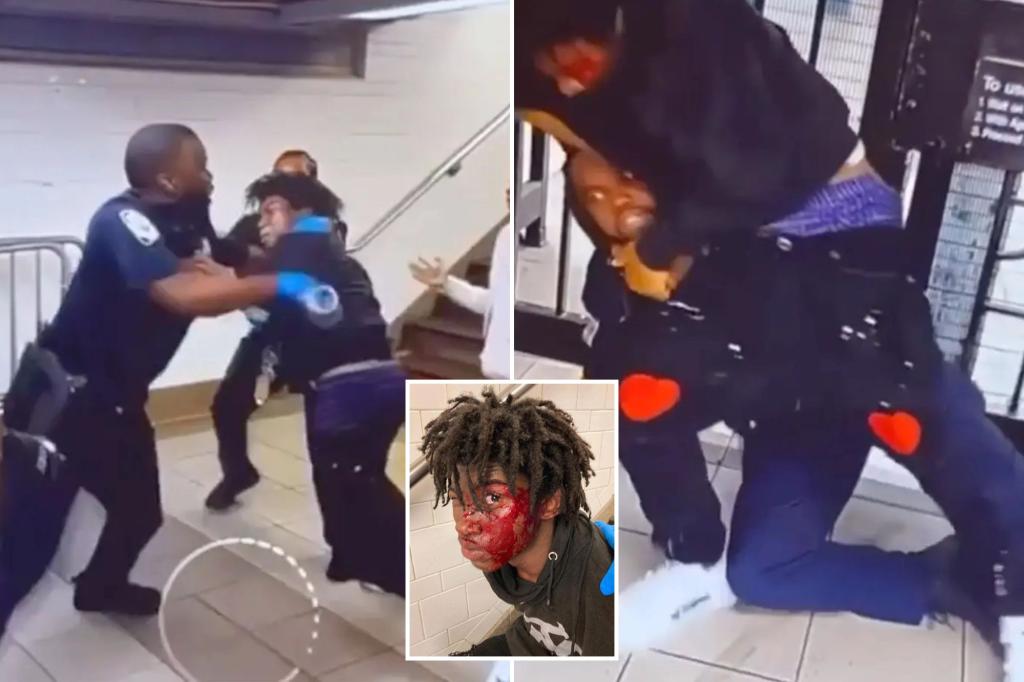 So a 16-year-old fare-beater hauls off and wallops a cop on Saturday, igniting a wild subway-station brawl and producing — what else in these times? — a viral video. The perp is subdued, though not easily, and arrested — but is back on the street within hours.

And then, as predictably as a summertime sunrise, it turns out that the accused cop-fighter was free on cashless bail after being charged with felony robbery just days earlier.

Do you suppose New Yorkers will ever have enough of this? Enough of it to say, that’s it — no more?

And if you wonder just why the subways aren’t safe any longer, there’s a sure clue in the video: Transit cops don’t appear to carry nightsticks any longer.

Which is perfectly understandable. This, again. is the age of the viral cell-phone video — and a time when New York’s political culture has decayed to where the interests of violent criminals trump public safety just about every time.

Which is not lost on New York’s 16-year-old aspiring robbers and cop-fighters, or on the city’s criminal class in general — which now and forever will push the envelope every bit as far as society will permit.

By now it should be obvious that the quickest way to create a crime wave is to handcuff cops and gut the penal law — all in the name of social progress.

The alleged cop-fighter, for example, apparently is the beneficiary of a bewildering confluence of a new law expanding the privileges of young criminals — the so-called Raise the Age statute — and New York’s now-infamous cashless bail system.

Apologists claim that the state’s continuing descent into urban anarchy is the result of COVID dislocations and George Floyd blowback — and there’s certainly something to that. But the decline was underway long before Wuhan became a household word.

Place the blame on a general loss of the will necessary to maintain a civil society and you’ll be closer to the truth.

It was only three years ago that New York City’s entertainment du jure was pouring buckets of water over cops in the street, to the hoots and hollers of bystanders and the abject humiliation of the officers involved — whose bosses, significantly, just tut-tutted and shrugged.

The slippery slope was obvious enough then, though ignored where it mattered. New York City continued to dismantle an extraordinarily effective public-safety strategy — stop-and-frisk, broken-windows and aggressive anti-gun efforts landed in the dumpster. Albany and the City Council rewrote state law and city ordinances to the advantage of criminals — to predictable, often deadly, effect.

None of this is news — indeed, it’s tedious just to rehearse it. But there’s no denying that the stage had been set for COVID chaos, the summer of George Floyd and everything which has followed.

Which obviously includes Saturday’s subway fracas, which made Mayor Adams angry.
Hizzoner talks the right talk these days, as he has from the beginning: “We need to look at violent offenders and this is a clear case of that,” he said Tuesday. “Robbery is a violent crime. But as soon as we catch them, the system releases them.”

Yes yes, yes. But more than talk is necessary — especially talk that increasingly is whiny and impotent.

Of course “the system” releases felons as soon as they are caught — everybody already knows that. So by this point, the problem isn’t so much “the system” as it is the people who refuse to fix it.

And right now, Adams himself refuses to call out those who could fix it, but who won’t.

This is a state-wide election year, and the mayor needs to use the considerable power of his office – and the pulpit he owns – to bully a cowardly governor and an ideologically corrupt Legislature into setting things right.

And until Eric Adams begins talking in those terms the happy times for teen-aged cop-fighters will continue — as will New York City’s rapid decline.

nypost.com - 3 months ago
Lifeguards around the Big Apple are fearing shrinkage this summer -- of their corps numbers.
Read More

Slumping Nets focusing on health and continuity as playoffs near

nypost.com - 1 year ago
Limping into the playoffs won’t necessarily preclude the Nets from a long NBA playoff run.
Read More

nypost.com - 4 months ago
Even though he is 60 years old, the news that Wright is retiring seemingly popped up out of nowhere.
Read More
More News & Articles