Giants’ preseason-opening win over the Patriots a mixed bag 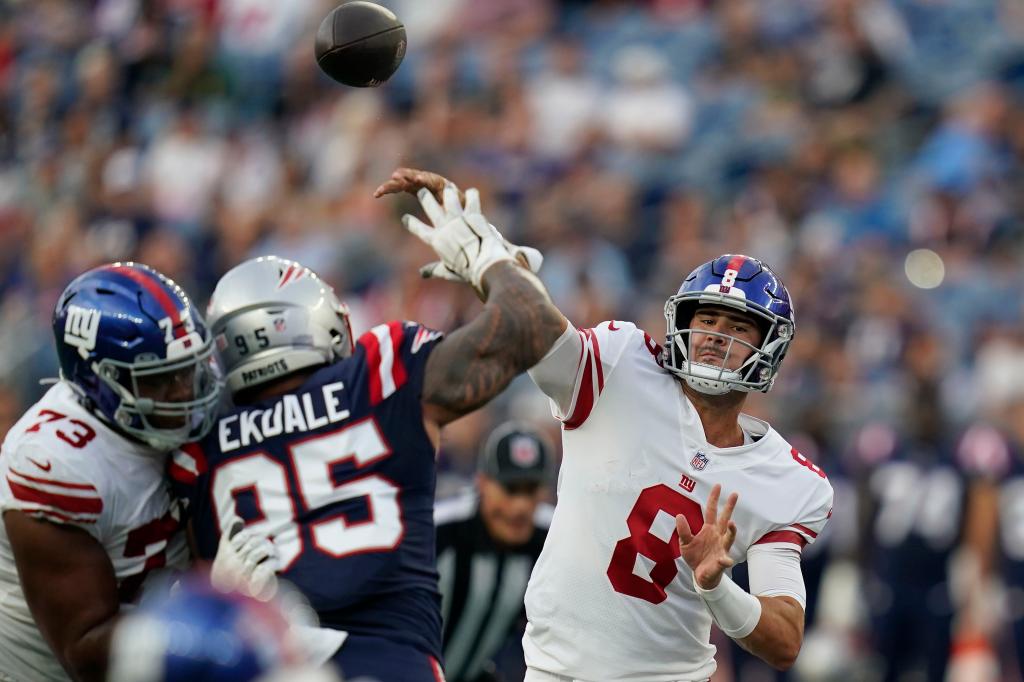 FOXBOROUGH, Mass. — It could have been worse.

And it could have been better.

It was a mixed bag for quarterback Daniel Jones and the Giants’ first-team offense in Thursday night’s preseason opener. There were no starting defensive players on the field for the Patriots and yet there was nothing resembling dominance by a Giants’ unit that has a long way to go to make anyone feel confident about the real season.

This was the first-ever game for Brian Daboll as a head coach, and the Giants won 23-21 on Graham Gano’s last-second 24-yard field goal at Gillette Stadium, a place Daboll worked many years for Bill Belichick.

Daboll was adamant that his starters needed work and he kept his first-team offense in the game for two series. The Giants would have felt better about the night’s work if Daboll pulled his offensive starters after one series. The net result in the two series: Three points.

Jones finished 6 of 10 for 69 yards and did more good than bad, operating a fairly vanilla attack, as Daboll was not about to show much of anything. Jones ran 7 yards for one first down and likely would have put his team in the end zone if his highest-priced target wrapped his hands around the football. Jones, after all, cannot do it alone.

The opening was promising, as Jones picked up four first downs on a 13-play drive. He went 3 of 6 for 42 yards but things stalled after Kenny Golladay, having a sluggish training camp, dropped a ball in his hands at the 2-yard line, a real drive-killer. Earlier, Golladay failed to get any separation on cornerback Terrance Mitchell on a deep pass down the right sideline.

Saquon Barkley, whose last preseason appearance came as a rookie in 2018, was busy in his one series, running the ball four times for 13 yards and turning the corner with a quick pivot on an 8-yard reception on third-and-5. This was a strong first step for Barkley and might be a portent of things to come, as he is expected to be a major cog in the offensive wheel.

Sign up for Inside the Giants by Paul Schwartz, a weekly Sports+ exclusive.

Jones was given sufficient protection on the opening drive, allowing him to hit Darius Slayton and Collin Johnson for matching 17-yard gains.

Left tackle Andrew Thomas was replaced by Devery Hamiton for the second series. Jones hit Johnson — who has enjoyed a strong summer — for 13 yards but then Jones’ protection broke down. He was sacked by linebacker Josh Uche, who got the better of tight end Chris Myarick, although rookie right tackle Evan Neal was also beaten on the play. Jones’ next pass, intended for Slayton, had no chance because his pocket collapsed.

Shane Lemieux, the starting left guard, was forced out with a toe injury in the first quarter.

Wide receiver Kadarius Toney was one significant starter on offense who did not take the field. Coming off offseason knee surgery, Toney has had his workload monitored in training camp and he came out of Tuesday’s practice early after tweaking his knee or leg.

Toney did not make the trip. Neither did defensive lineman Leonard Williams, who also came out of practice early on Tuesday and remained behind for treatment.

Cornerback Aaron Robinson, lining up with the starters, with the expectation he will be able to hold up after the free-agency loss of James Bradberry, had a rough evening. Robinson was beaten by Kristian Wilkerson over the top for a 33-yard completion, broke up a pass in the end zone intended for Wilkerson and then was penalized for taunting for raising his arms after the play — an extremely soft call. Next, Robinson was beaten for a 2-yard touchdown pass to Tyquan Thornton on the last play of the first quarter. A flag was dropped and Robinson was called for defensive holding, the penalty wiped out by the scoring pass.

Backup quarterback Tyrod Taylor showed why the Giants are so high on him as a roster addition. He led an 11-play, 86-yard scoring drive in the second quarter, ending with a 7-yard strike to Richie James for a touchdown. Earlier, a Taylor pass deflected off Johnson’s hands and James leaped to make the catch for a pickup of 26 yards.

Taylor, playing with the second-teamers, finished 12 of 21 for 129 yards. Davis Webb led the third group to a touchdown in the third quarter, a 2-yard run by Antonio Williams.

nypost.com - 3 months ago
Braxton Berrios knows what it takes to win in the NFL – the veteran wide receiver is using his knowledge to help bring the New York Jets to the promised land.
Read More

nypost.com - 1 year ago
Rudy Gobert’s flopping technique needs some work. The Jazz center — who fouled out in the fourth quarter of a 112-109 Game 1 loss to the Grizzlies — delivered a blatant flop from the sideline. Following a Derrick Favors and-1 dunk, Gobert was standing on
Read More

nypost.com - 1 year ago
A University of Chicago student was killed in a freak tragedy when a stray bullet ripped through his subway car window during the commute home from his summer internship, police and loved ones said.
Read More

How fantasy owners should track saves after trade deadline