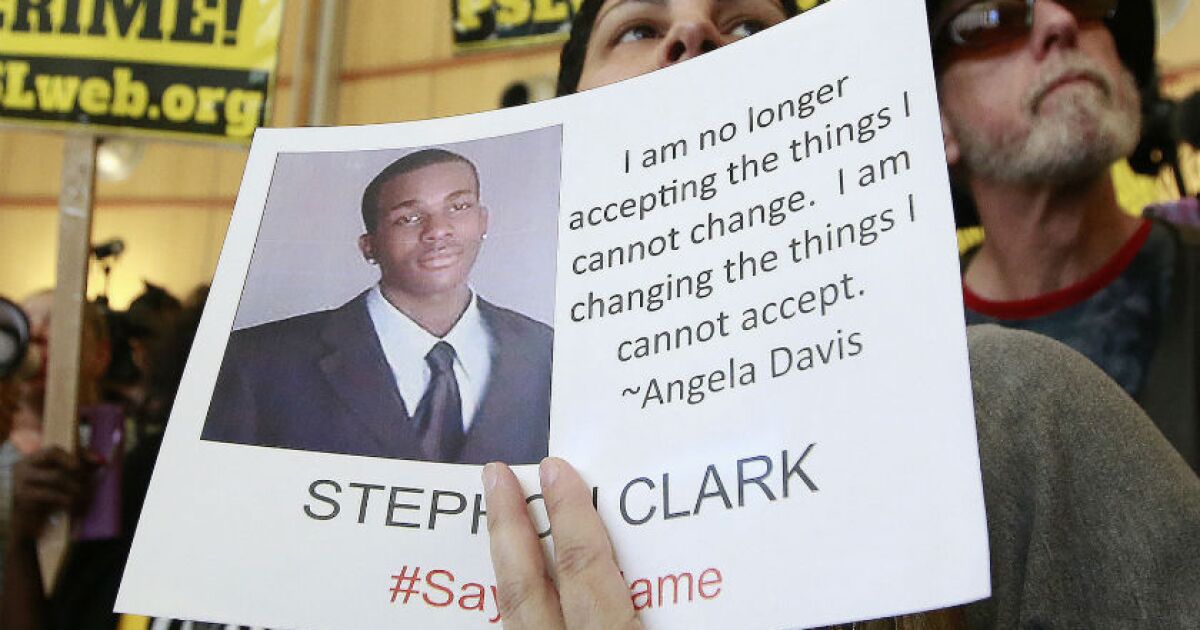 The city of Sacramento will pay $1.7 million to the parents of Stephon Clark, who was shot to death by police while holding a cellphone in 2018, to settle the final portion of a lawsuit filed by Clark’s family, officials said Friday.

Clark, 22, was killed March 18, 2018, when Sacramento police fired 20 shots, striking him at least seven times. Officers had chased Clark to the backyard of his grandmother’s home after receiving reports of vandalism, and said that he advanced on them while holding a firearm.

Clark was holding a cellphone at the time.

Investigations by local, state and federal agencies found that the shooting was within Sacramento Police Department policies and state law.

In 2019, the city settled part of the lawsuit brought by Clark’s family by providing $2.4 million to his two children, leaving his parents as the sole remaining plaintiffs, according to a later court ruling.

“The decision to resolve the case through a negotiated agreement comes after careful consideration of all options,” Sacramento City Atty. Susana Alcala Wood said in a news release Friday. “We believe this is the best path forward for all involved parties including our community.”

Sacramento Mayor Darrell Steinberg called Clark’s death “a tragedy that brought pain and sorrow to his family and to our entire city.”

“Everyone wishes this heartbreaking event had not occurred. A family lost a son, a grandson, a brother and a father,” Steinberg said in the statement.

The protests helped spur the passage of Senate Bill 1421, a police transparency law that requires the release of personnel records in law enforcement shootings, and Assembly Bill 392, which raised standards for when officers can use deadly force.

The Sacramento Police Department also made changes in the wake of the shooting, including updating its body-camera and foot-pursuit policies “as well as development of a comprehensive use-of-force policy,” the city said.

www.latimes.com - 2 years ago
Billions of dollars are at stake as California voters decide whether to overturn a ban on affirmative action for government contracting.
Read More

www.latimes.com - 2 years ago
Larry McMurtry, the author known for outspoken, brassy characters of the old West who also won a 2006 Oscar for 'Brokeback Mountain,' has died at 84.
Read More

www.latimes.com - 1 year ago
The House, with the backing of President Biden, is expected to approve legislation to repeal the 2002 authorization of use of military force in Iraq.
Read More

www.latimes.com - 2 years ago
Thirteen more California counties are poised to move from the purple tier to the red tier in the state's coronavirus reopening roadmap.
Read More
More News & Articles