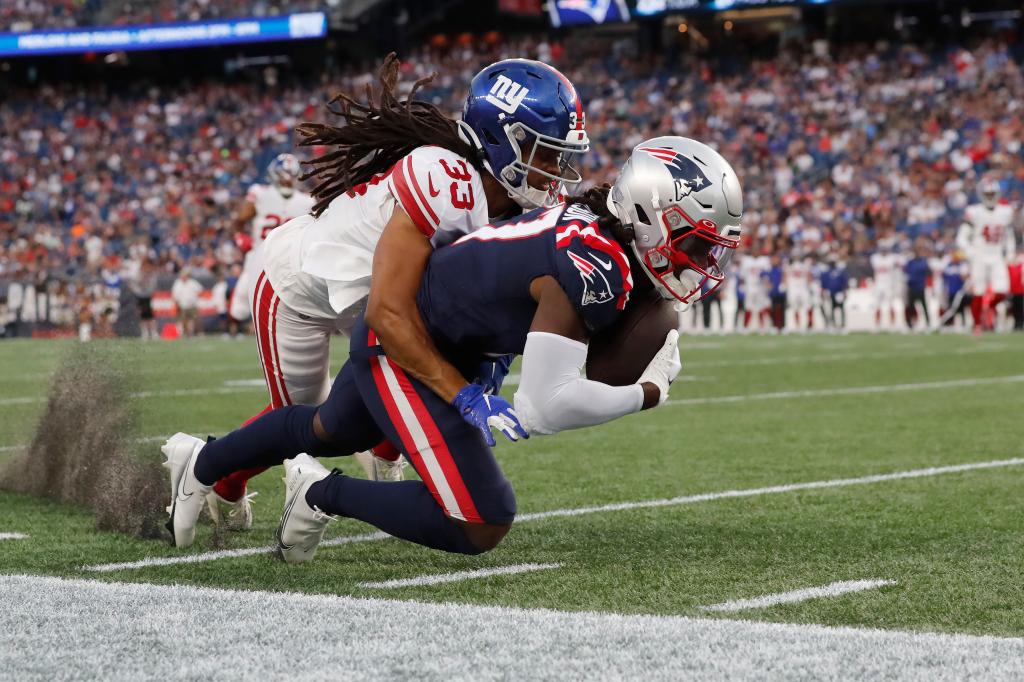 Sometimes, preseason games are about creating misdirection. Other times, what happens in August is a precursor of what is in store once the games count.

And there was an ominous feeling Thursday that Hoyer throwing with repeat success at Robinson on five of the nine snaps he dropped into coverage was a taste of how opposing offenses view the Giants secondary: No need to target Adoree’ Jackson until Robinson proves himself.

“There’s some good things that he had, and some things we can get better at,” head coach Brian Daboll said one day after the Giants opened with a 23-21 win against the Patriots. “Aaron has had a good camp, and it’s a good competitive situation. Corners are going to get beat once in a while, and it’s how you respond the next play, the next game. I have a lot of confidence in A-Rob.”

It was a small sampling, but Robinson looked the part of a second-year pro whose rookie season was a wash because he missed eight games and played a different position (slot) in a different scheme when on the field.

With the head coach (Joe Judge) who drafted him on the opposing sideline working with quarterbacks, Robinson allowed three catches for 44 yards and a touchdown. Robinson was flagged for a ticky-tack taunting penalty after an incompletion and a holding penalty (declined for the touchdown), which has been an issue throughout his handsy training camp.

“I’m expecting that,” Robinson told reporters in the locker room. “You’ve got to embrace it. That’s part of the game. With that comes plays being made.”

The hard truth is that the Giants are in a roster position where they must ask too much too soon of too many young players and live with the results. Defensive coordinator Wink Martindale uses a blitz-heavy plan that leaves cornerbacks in press man-to-man coverage.

“You expect [Robinson] to make a jump and rise to the occasion of being a starter,” defensive backs coach Jerome Henderson said last week. “He’s got a great demeanor. Even though he doesn’t say much vocally, his play says a lot — and the way he cares speaks volumes to me.”

For all the new around the Giants, Robinson’s debut felt eerily familiar to the crowd which recognizes No. 2 cornerback as an old black hole. He was beat with first steps and playing catch-up.

In 2019, preseason starter Antonio Hamilton was benched after one regular-season game. In 2020, Corey Ballentine lasted two starts in the job and later was cut during Week 10. After going all-in to fix the problem by signing Jackson to pair with James Bradberry in 2021, the Giants might again be in a spot where offenses can attack one side of the field because they weren’t able to replace Bradberry when he became a salary-cap casualty.

“Every team has their own philosophy offensively. I don’t want to speak for other teams,” Daboll said when asked if that is the strategy he expects. “I think we have to be ready to defend all areas of the field.”

Robinson might get a longer leash than some of his predecessors. Martindale implied last week that there is a thick line of demarcation between the starters and backups.

“I love our first group of secondary players,” he said, “and now we’ve just got to keep building on depth of that secondary.”

Rookie Cor’dale Flott — a second-teamer — was injured in the opener, and the Giants have not acted in free agency this offseason like a tape-and-glue team looking to take reps away from young players.

“We played a lot of man-to-man coverage, so it was a good evaluation,” Daboll said. “Made some good plays, and then we have to do a good job of finding the ball and locating it in the deep part of the field. I thought those guys competed, tackled fairly well, tight in coverage. We’ve got to keep working on making plays on the ball.”

The work starts with the new starter.

iHeartRadio Music Awards 2021: Nominations, performers and how to watch

nypost.com - 1 year ago
The eighth-annual iHeartRadio Music Awards will be a star-studded event to celebrate the most played artists and songs on iHeartRadio stations and the iHeartRadio app throughout 2020.
Read More

nypost.com - 1 year ago
Shocking video shows a process server follow the wife of Rep. Mo Brooks (R-Ala.) into their garage to serve her with a lawsuit brought by Rep. Eric Swalwell (D-Calif.).
Read More

nypost.com - 3 months ago
The Yankees called up JP Sears to start Tuesday’s game as a luxury,
Read More

Jets could target these players in NFL free agency

nypost.com - 2 years ago
Here are three players the Jets could target with NFL free agency 2021 fast approaching. Yannick Ngakoue, DE The Jets have lacked a good edge rusher for 15 years. Ngakoue is coming off a strange year in which he was traded twice. He has had at least eight
Read More
More News & Articles