The Jets only can hope that linebacker Quincy Williams got his boneheaded moment of the season out of the way early.
Author: Brian Costello
Published: 2022-08-13 02:11 am 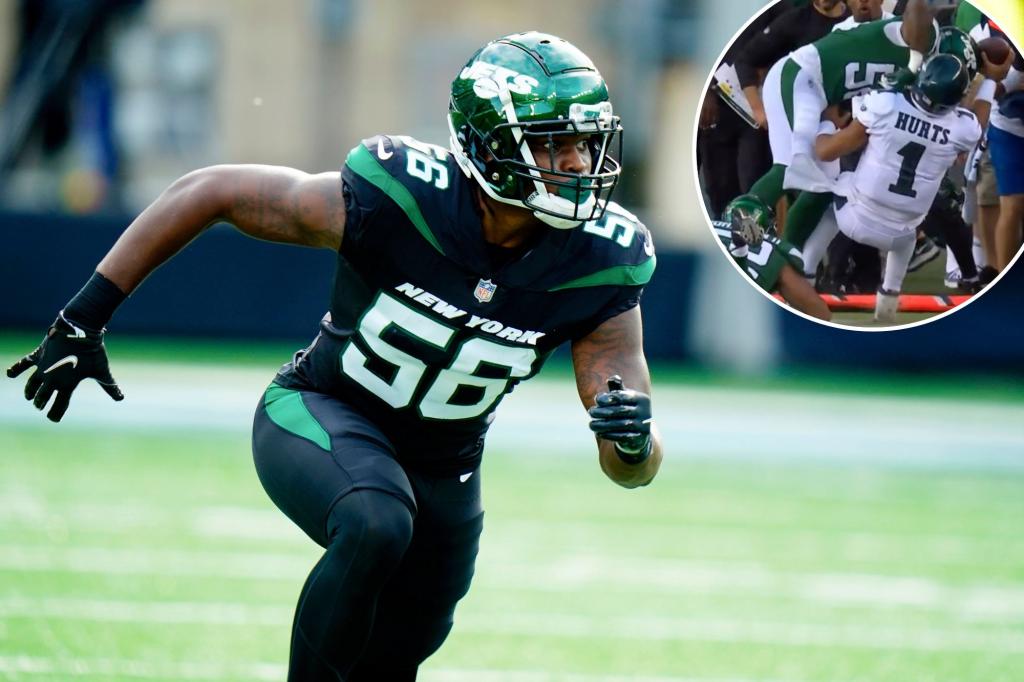 PHILADELPHIA — The Jets only can hope that linebacker Quincy Williams got his boneheaded moment of the season out of the way early.

Williams hit Eagles quarterback Jalen Hurts out of bounds on a third-down play in the first quarter Friday night that drew a penalty flag and the ire of Eagles coach Nick Sirianni.

On third-and-5 at the Jets’ 35-yard-line, Hurts scrambled toward the Jets’ sideline. He clearly was out of bounds when Williams drilled him. Sirianni was incensed and walked onto the field almost to the numbers, screaming in the direction of the Jets sideline and head coach Robert Saleh. Hurts was not injured and continued the drive, which ended with him throwing a 22-yard touchdown to Dallas Goedert.

Saleh was not happy with Williams and said he spoke to Sirianni after the game, a 24-21 Jets win, about the play.

“Egregiously awful by Quincy,” Saleh said. “He knows that. He knows better. Those are the plays Quincy has to get out of his game if he wants to become the linebacker that we all think he can be.”

Saleh said OT Duane Brown is scheduled to arrive in New Jersey on Saturday and officially sign with the Jets after agreeing to a two-year deal on Thursday.

“We’re excited about Duane,” Saleh said. “He definitely makes our football team better. Just watching him play, the guy’s 37 years old and he still has a lot of juice left in him. Excited for him.”

Mike White replaced Zach Wilson after his knee injury. White went 10-for-20 for 98 yards. Joe Flacco was not in uniform for the game, an apparent rest day for the veteran. … The Jets were without five starters on defense and Saleh chose to rest many of his veterans. DE Carl Lawson, DE John Franklin-Myers, LB C.J. Mosley, safety Lamarcus Joyner and CB D.J. Reed all sat. Reed has a hamstring injury, but the others are all believed to be healthy.

Chuma Edoga started at left tackle and rookie Max Mitchell started at right tackle. George Fant did not play in the game. … Rookie TE Jeremy Ruckert caught a 1-yard touchdown pass in the fourth quarter from backup QB Chris Strevelerto give the Jets a 17-14 lead. … In the kicking competition, Eddy Pineiro kicked a 26-yard field goal. Greg Zuerlein made two extra points, but did not attempt a field goal.

Versatile Giants safeties group has only one concern

nypost.com - 1 year ago
A case can be made that this group of safeties will have more impact than any other on the roster.
Read More

nypost.com - 10 months ago
The Dow surged more than 1.8 percent in mid-day trading, wiping out Wednesday's losses of 462 points and recouping some of Tuesday's plummet.
Read More

Emmys 2020: In Memoriam leaves Nick Cordero off the list

nypost.com - 2 years ago
Nick Cordero was left out of the in memoriam segment during the all-virtual 2020 Emmys ceremony.
Read More

nypost.com - 1 year ago
Tyler Skaggs’ family is suing the Los Angeles Angels for negligence over the pitcher’s death in 2019. According to ESPN, Skaggs’ widow, Carli, filed a suit against in Fort Worth, Texas against the club and two former employees — communications director
Read More
More News & Articles