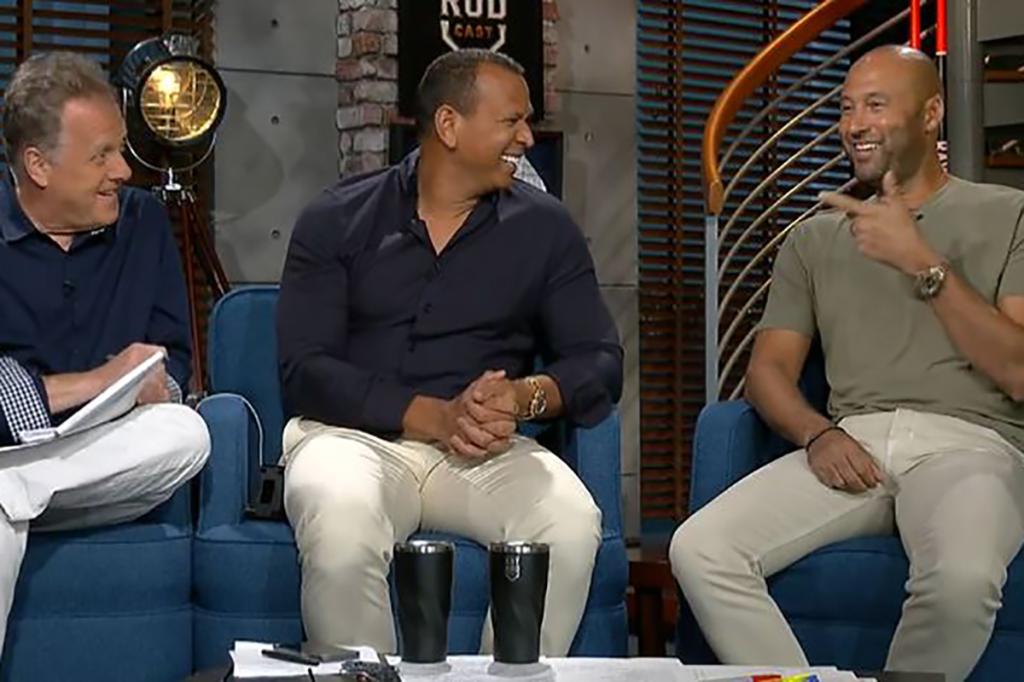 Michael Kay hinted about it before he could finally press Alex Rodriguez and Derek Jeter about the status of their infamous relationship.

“Are you guys OK?” Kay asked as the first question to Jeter, a guest on the “Kay-Rod Cast” of the Yankees-Red Sox game Sunday night. “Everybody asks me ‘What’s going to happen once they’re in the same room together?’ ”

The conversation loosened up with talk about “The Captain,” an ESPN documentary about Jeter’s career, though Rodriguez eventually returned to the subject.

A-Rod said it was “something he’s never told [Kay] before” and dove into his “regrets” about his volatile friendship with Jeter. The two met up a month-and-a-half ago to squash things — with “a lot of cocktails,” at least for him, Rodriguez added.

But during the middle of Yankees’ 3-0 loss to the Red Sox at Fenway Park on Sunday, at least one bright spot was the “therapeutic” talk between Rodriguez and Jeter, showing they’ve seemingly worked on repairing their relationship.

“You move on. You learn. Things happen in life,” Jeter said. “[I] lost one of my best friends in Gerald Williams [to cancer in February] and you realize life is short. You don’t hold grudges anymore and you move on.”

Their beef may seemingly be ended, but Rodriguez showed signs of awkwardness even before Jeter stepped into the studio. Kay poked fun at the two frenemies’ relationship while presenting Sunday’s guest list, asking Rodriguez if he’s “OK with this” once Jeter’s face appeared.

But as soon as Jeter appeared on set, the two shook hands and shared a bro-hug.

Rodriguez and Jeter were young stars and close friends in the late 1990s, with Kay touching on how the two used to sleep over at each other’s house during away games. The pair’s bromance shattered, after Rodriguez’s comments about Jeter in a 2001 Esquire story appeared to paint the Yankees star’s success as a product of being on a great team and not his individual talents.

Jeter and Rodriguez became teammates with the Yankees from 2004-14, winning the World Series in 2009. Rodriguez missed Jeter’s final season as he served a season-long PED suspension.

“I was sometimes my own worst enemy,” Rodriguez said.

Rodriguez said he’s working on being a better friend to Jeter after “cringing” over his past mistakes. And on Sunday, hints of that showed, with the two laughing like old friends about fatherhood and an embarrassing Sports Illustrated photo shoot during their early 20s, and being amazed by Aaron Judge’s monster season.

nypost.com - 1 month ago
A park-goer who was hospitalized after he was hit by a falling tree limb over the weekend has died, a police source said Monday.
Read More

nypost.com - 4 months ago
Russia occupies or blocks all of Ukraine’s Black Sea ports, preventing the export of a tenth of the world’s grain supply.
Read More

I’m 51 and gave birth twice during menopause: ‘Miracles do happen’

nypost.com - 2 months ago
"Giving birth during menopause is the best thing that ever happened to me!" the middle-aged new mom declared.
Read More

nypost.com - 7 months ago
Police made a grim discovery during a Utah traffic stop this week: A severed finger stashed in a man's wallet.
Read More
More News & Articles